Fatih Birol says Russia could boost gas deliveries to Europe by at least a third, but is keeping spot sales capped despite high prices

The head of the International Energy Agency (IEA) blamed Russia for an energy crunch that’s hurting economies across Europe.

Russia could boost gas deliveries to the continent by at least a third from current levels, but it’s keeping spot sales capped despite high prices, IEA executive director Fatih Birol said on a call with reporters on Wednesday. That’s the equivalent of 3-billion cubic metres a month, or a new liquefied natural gas cargo arriving every single day.

Europe is grappling with an energy crunch that’s resulted in gas and power prices breaking multiple records over the past few months. The continent’s gas inventories are already at their lowest in more than a decade, and the two coldest months of the year have only just begun.

“There are strong elements of tightness in the European gas market due to Russia’s behaviour,” Birol said. “The current storage deficit in the EU is largely due to Gazprom.”

Russian gas supplies to Europe dropped 25% in the fourth quarter of 2021 from a year earlier and are down 22% compared pre-pandemic levels, according to the IEA. Moscow has capped flows to the continent while other suppliers such as Norway, Algeria and Azerbaijan have been ramping them up, said Birol.

Gas storage facilities in the EU are just 51% filled, compared to about 70% normally. Gazprom is responsible for half of Europe’s inventory deficit, even though the Russian company’s facilities only account for 10% of total installed capacity in the continent, Birol said. 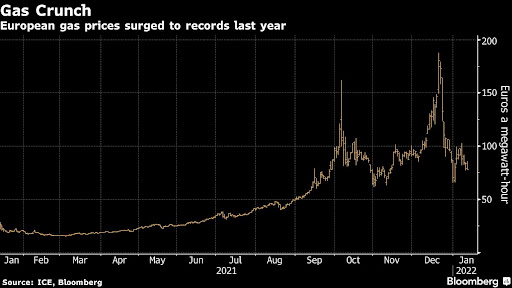 In 2021, Russian President Vladimir Putin ordered Gazprom to fill its European storage sites. While some gas was added, it wasn’t nearly enough to supply the continent’s needs. High prices have caused heavy industries from metals smelters to fertiliser producers to curtail output or halt altogether.

“While we understand Gazprom is fulfilling its contractual commitments under long-term contracts, it has reduced spot sales to Europe and this is despite the fact that the price under Gazprom’s long-term contracts are well below current spot price levels,” Birol said.

The Paris-based agency also recommended that countries in Europe mandate minimum levels of inventories to safeguard supplies in the future.

“Europe as a whole has not paid sufficient attention to the critical importance of gas storage to the security of its gas supply,” Birol said.