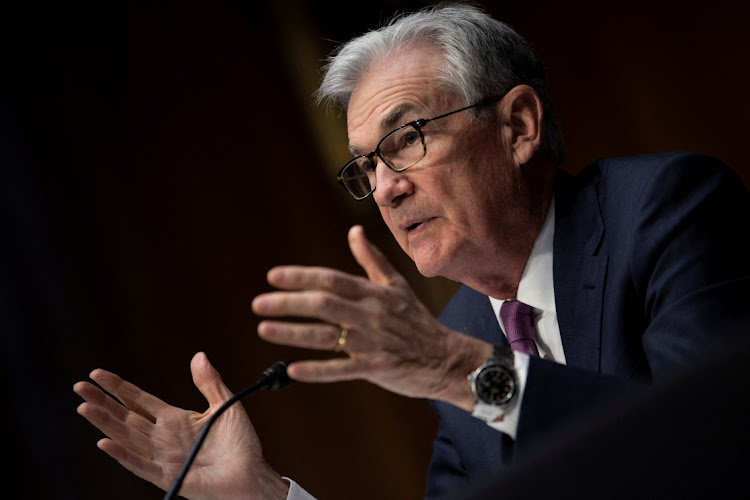 US Federal Reserve chair Jerome Powell speaks during his Senate nomination hearing on Capitol Hill in Washington, the US, January 11 2022. Picture: BRENDAN SMIALOWSKI/REUTERS

Federal Reserve chair Jerome Powell played it safe during his confirmation hearing for a second four-year term, pledging to do what’s necessary to contain an inflation surge to prolong the expansion and that  high inflation is a “severe threat to  maximum employment”.

“If we have to raise interest rates more over time, we will,” Powell said on Tuesday in response to a question during testimony before the Senate banking committee. “We will use our tools to get inflation back.”

Both Republicans and Democrats have expressed concern that the Fed is over-stimulating the economy with low rates and bond purchases as inflation runs far above officials’ 2% target. US central bankers have been surprised by the persistence of inflation and want to push against it in 2022 without stalling growth.

Prices rose 5.7% for the 12 months ending November as measured by the personal consumption expenditures price index, the Fed’s preferred benchmark.

Powell’s remarks were more restrained than those of some of his colleagues, who’ve called openly for the Fed to starting raising rates at their meeting in March. But the chair typically tries to avoid providing policy guidance before he’s had a chance to discuss matters with the Fed’s policy-setting committee, which next gathers   January 25-26.

While stressing that the Fed doesn’t prioritise its congressional mandate for price stability more than the goal for full employment, Powell said that the emphasis can shift and at the moment there was more focus on inflation.

“To get the kind of very strong labour market we want with high participation, it is going to take a long expansion,” he said. “To get a long expansion we are going to need price stability. And so in a way, high inflation is a severe threat to the achievement of maximum employment.”

The hearing underscored the bipartisan support Powell is likely to earn to serve another term starting in February.

“The ongoing vagueness about the timing of the first rate hike contrasts with the avalanche of comments from other Fed directors circling March 2022,” said Thomas Costerg, senior US economist at Pictet Wealth Management. “Bottom line: I have a sense Powell wants to calm things a bit and wants the market to digest quietly the last minutes — not add fuel to the fire.”

Investors are betting the Fed will begin raising its benchmark federal funds rate in March, two years after cutting it to nearly zero at the onset of the pandemic in March 2020. A labor department report on Friday showing the US unemployment rate fell to 3.9% in December — closing in on the 3.5% pre-pandemic low.

Fed officials in December said they would accelerate end of their asset purchase programme, and forecast they would raise rates three times in 2022. Wall Street firms such as Goldman Sachs Group are forecasting as many as four increases.

Powell, asked about plans to shrink the Fed’s $8.77-trillion balance sheet, said at some point this year he and his colleagues will allow it to run off. His remarks follow comments from other Fed officials favouring a start to shrinking the balance sheet fairly soon after the central bank begins raising rates.

Noting that the US economy was in a much stronger position than the last time the central bank shrank its balance sheet — when it waited about two years between raising rates and allowing its holdings to run off, the chair said no decisions had been made but it would be quicker this time about.

“The balance sheet is much bigger and so the runoff can be faster. So I would say sooner and faster — that much is clear,” he said.

US unemployment rate falls below 4%

Against a backdrop of accelerating inflation, the drop in the jobless rate and faster wage growth may justify a quicker tightening of monetary policy
News
5 months ago