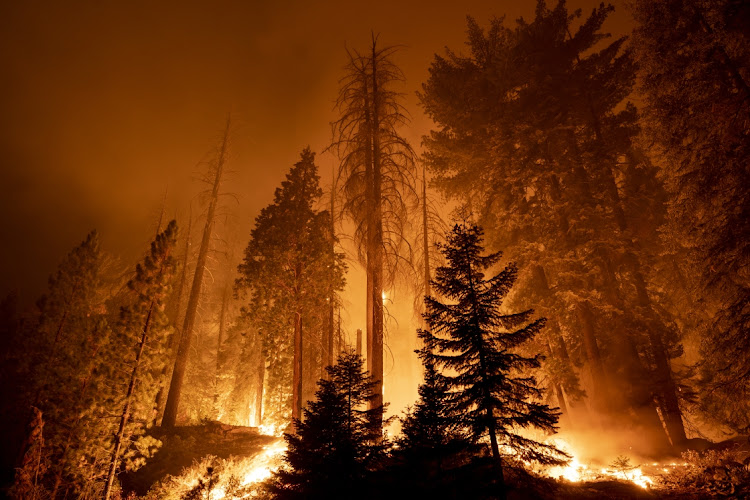 The Windy Fire blaze in Sequoia National Forest in California, the US, September 21 2021. A single wildfire, the Castle fire, destroyed as much as 14% of all the world’s giant sequoias in 2020. Picture: DAVID MCNEW/GETTY IMAGES

A substantial rise in atmospheric methane levels helped push global temperatures in 2021 towards the highest ever recorded, according to the EU’s Copernicus Climate Change Service.

A new report released on Monday determined that 2021 was the fifth warmest in the 52-year European record, slightly hotter than 2015 and 2018. The past seven years rank as the hottest on record, and 21 of the 22 warmest years have occurred since 2000.

Pollution from fossil-fuel combustion, industrial activity and other human sources is causing temperatures to rise. A global consortium of climate scientists backed by the UN said with “unequivocal” confidence in an August report that human-made pollution is causing the warming trend. A major factor that kept 2021 from matching record heat levels was the ongoing La Niña event, an occasional natural cooling in the equatorial Pacific that’s expected to last through the early months of 2022.

The US is the world’s biggest CO₂ polluter historically, and shows no sign of abating despite White House ambition to halve 2005 emissions by the end of the decade. A preliminary analysis of last year’s emissions suggests the US is moving in the opposite direction, with greenhouse gas emissions rising by 6.2% — a faster rate than GDP growth of 3.8%, according to research firm Rhodium Group. The result marks a 17% leap from 2020 emissions, propelled by increased coal-burning and freight hauling.

Atmospheric methane increased by a record amount in 2021, to 1,876 parts per billion, according to Copernicus. The supercharged greenhouse gas with more than 80 times the initial warming impact of CO₂ comes from natural sources, such as swamps and termites, as well as human activity that includes oil and gas infrastructure, cattle, rice production and landfills.

While the multiple sources make it difficult to say with precision which are responsible for the overall spike, there are new ways to track some previously hard-to-detect methane emitters. 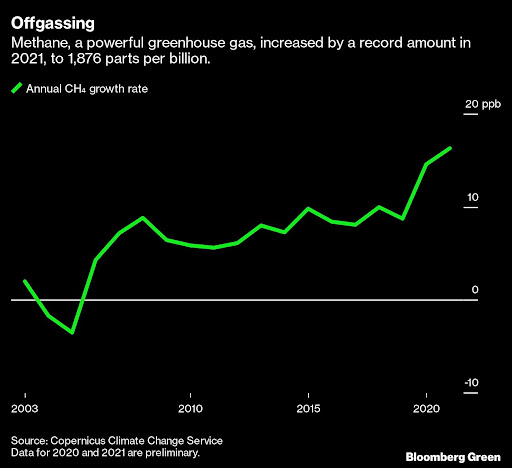 The jump in global atmospheric methane comes as satellite and ground-based sensing has rendered the gas newly visible to cameras. In one recent example, a pipeline-safety measure taken for highway construction in northeast Texas in November led to methane release at an hourly rate equal to a year of CO₂ emissions from 2,500 cars.

The ubiquity of methane emissions and their powerful but temporary residence in the atmosphere make them an efficient way to direct climate policy in the near future. That’s why more than 100 countries signed on to a methane-cutting pledge at the recent UN climate talks in Glasgow, Scotland.

Annual climate results have the potential to slightly misdirect non-scientists. While last year’s average temperature ranks behind 2016, 2020, 2019 and 2017, it’s more important to focus on the overall trend that has seen every decade become hotter than the previous since the 1960s. It helps to think of the fifth hottest year as more akin to the fifth hottest charcoal in a growing fire — they're all in the same range, and vectoring upwards.

“These events are a stark reminder of the need to change our ways, take decisive and effective steps toward a sustainable society and work towards reducing net carbon emissions,” said Carlo Buontempo, director of the Copernicus Climate Change Service.

Regional, seasonal and local results from Copernicus fill out the picture of a world now in continuous transformation, with plenty of superlatives to go around. July 2021 ranks as the hottest single month NOAA ever recorded, and the June-to-August period was the hottest summer in the land record.

Sicily probably set a new European temperature record of 48.8°C, smashing the previous record by 0.8°C. The heat worsened wildfires around the Mediterranean. The western coast of North America experienced a confounding heat attack in June; fires on the continent gave off the highest level of CO₂ and other emissions ever recorded, at 83-million tonnes.

Carbon dioxide, the gas responsible for about three-quarters of the planet’s warming, continued its rise by ticking up 2.4 parts per million (ppm). That puts the atmospheric average at 414.3 ppm, or 50% more CO₂ than in the preindustrial era.

Other scientific groups, including Nasa, NOAA, the UK Met Office and Berkeley Earth, maintain climate records that go back to the 19th century and are expected to release their 2021 results later in January.

The European Commission wants to give a temporary green label to gas projects that replace coal and emit no more than 270 grams of carbon dioxide ...
World
7 months ago

Global gross domestic product will be lifted by the continued recovery from the pandemic. says London-based Centre for Economics and Business Research
World
7 months ago
Next Article

AMANDA LITTLE: Insect protein can shift our food-system paradigm towards ...

AMANDA LITTLE: Insect protein can shift our food-system paradigm towards ...