The fire appeared to have come from a malfunctioning space heater in a flat, where residents had fled without closing the door 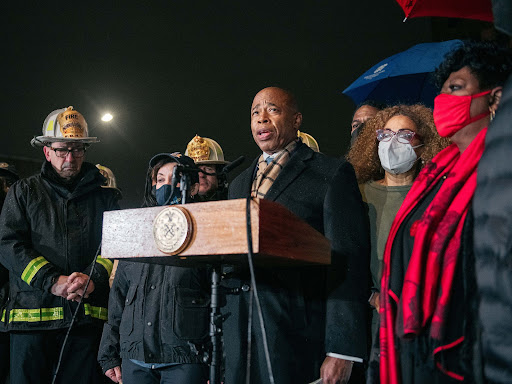 Adams said there was no initial reason to believe the 19-story building did not comply with city fire codes but that he was waiting for a thorough investigation by fire marshals.

“It appears the landlord was operating the building accordingly but a thorough investigation will determine that,” Adams said on CNN on Monday.

The fire appeared to have come from a malfunctioning space heater in an apartment, where residents had fled without closing the door, city officials said.

Firefighting units arrived within three minutes of the call but smoke had extended throughout the building at 333 E. 181st St, according to city officials. The 200 firefighters were met with thick smoke and fire.

“The open door allowed the smoke to fill the building,” Adams said in a separate interview with Fox Monday. “Fire marshals are going to do a thorough investigation into the source of fire, why it spread so rapidly throughout the building and look at doors. Did it have the automatic closing it was supposed to have based on a law that was passed in the city?”

Adams said it was the heavy smoke, not only the fire, that led to the high number of deaths. He said the city had enough staffing to fight the blaze, despite the Covid-19 spike that has thinned the ranks of public workers.

In a preliminary investigation, Adams said the city had found two outstanding building violations, but that neither was related to insufficient heat that might prompt residents to rely on space heaters for warmth.

He also said the investigation would focus on complaints from building residents that said smoke alarms went off frequently, leading some residents to stay in their units because they didn’t realise it was a real fire.

“This is a wake-up call for all of our buildings,” Adams said, noting the fire was the deadliest in the city since the Happy Land fire in 1990 — also in the Bronx — that killed 87 people.

The building is owned by Bronx Park Phase III Preservation, a consortium of investors made up of LIHC Investment Group, Belveron Partners and Camber Property Group, who bought the building as part of a $166m deal for eight buildings in the Bronx. Part of the financing came from loans from New York State Housing Finance Agency and Freddie Mac, according to financing records.

Camber Property Group is a major operator of affordable-housing units across the city. Co-founder Rick Gropper was among a group of transition advisers who consulted with Adams before he took over on January 1, while partner Andrew Moelis is the son of real-estate executive Ron Moelis and nephew of Ken Moelis, CEO of Moelis & Co.

A spokesperson for the group said it’s working with city officials to investigate the cause of the flames.

“We are devastated by the unimaginable loss of life caused by this profound tragedy,” the group said in a statement. “We are co-operating fully with the fire department and other city agencies as they investigate its cause, and we are doing all we can to assist our residents.”