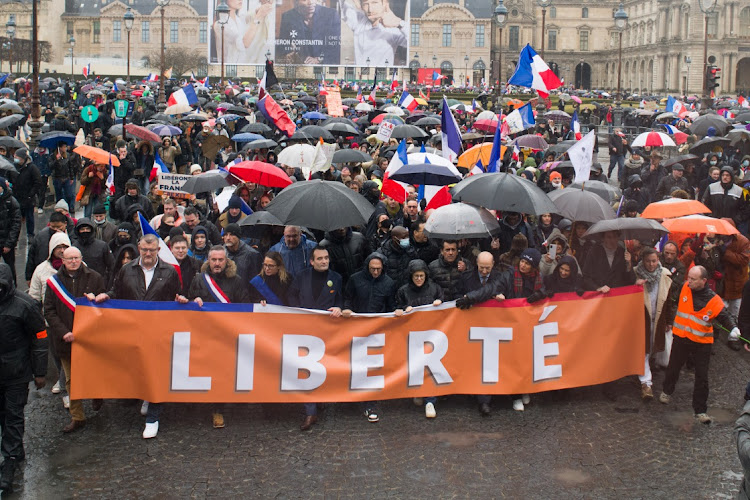 Demonstrators march near the Louvre Museum during a protest against vaccination pass rules and vaccinations to control the spread of Covid-19 in Paris, France, January 8 2022. Picture: NATHAN LAINE/BLOOMBERG

From Boris Johnson to Emmanuel Macron, Europe’s leaders are increasingly going after anti-vaxxers as the battle against the fast-spreading Omicron variant deepens the region’s pandemic fatigue.

Amid a seemingly unstoppable surge in infections, officials are focusing restrictions on unvaccinated people rather than resorting to widespread clampdowns. The strong overall uptake in inoculations has emboldened leaders to go more aggressively after holdouts, prodding them in various ways to roll up their sleeves.

French President Macron took the rhetoric to a new level last week when he said his government’s strategy was to “piss off” those who have refused shots. In the UK, Johnson accused anti-vaxxers of spreading “nonsense”. German Chancellor Olaf Scholz, who supports making shots compulsory, has labelled the anti-vax movement “a tiny minority of reckless extremists”.

With the pandemic entering its third year and about 70% of Europe fully vaccinated, the leaders are betting they have popular support for this approach.

Across the continent, the policy of coercion is becoming l’ordre du jour, with many governments trying to make life difficult for those refusing a vaccine and brushing aside concerns about civic freedoms.

Macron, who faces a difficult re-election campaign this spring, is banking on support among the millions who are desperate to leave the pandemic behind. About 77% of the population is fully vaccinated, according to government figures, putting him squarely on the side of the majority.

On Friday, he stood by his remarks, saying it “was my responsibility to ring the alarm.” 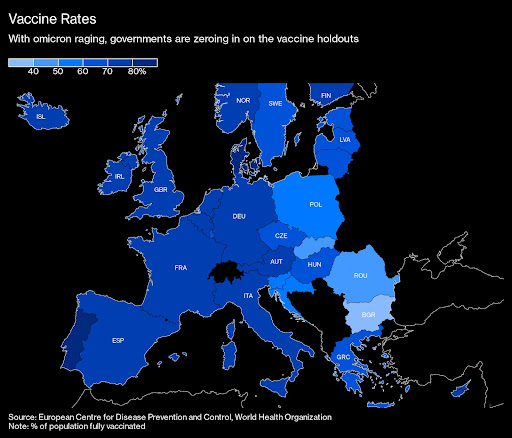 On Saturday, several thousand people joined marches across France to protest against restrictions for the non-vaccinated, brandishing placards denouncing Macron’s choice of language and his government’s latest efforts to tighten rules. According to local press reports, the protests were mainly peaceful though police fired teargas amid minor clashes in Paris.

France is toughening restrictions on those without inoculations, looking to put in place a vaccine pass to access bars and restaurants, or even to travel by train.

Neighbouring Italy on Wednesday made shots compulsory for people over 50, though the fine of €100 for non-compliance has been kept deliberately low.

In Austria, the unvaccinated are barred from most areas of life, including non-essential shopping, hotels and restaurants, though enforcement is spotty. The country also wants to make vaccines mandatory for everyone from February, though implementation may be delayed.

Thousands marched in Vienna on Saturday against the restrictions and upcoming mandate, resuming weekly protests seen before the holidays. Banners included ones that urged “Have the courage to use your own judgment”.

Meanwhile, a number of businesses in Austria have closed voluntarily due to high Covid-19 cases as the Omicron variant spreads.

Germany, Europe’s biggest economy, is already in what some officials have termed a “lockdown of the unvaccinated”, with limits on access to theatres and other leisure activities.

On Friday, authorities created an even bigger hurdle, requiring negative tests at restaurants and non-essential stores for fully vaccinated people. Only those who’ve had boosters get no-hassle access.

“Anyone who hasn’t been immunised is endangering themselves,” Scholz said.

The controversy over such measures found a new global flashpoint when world tennis No 1 Novak Djokovic — a vocal vaccine-mandate critic — was denied entry to Australia. That followed anger over a decision to grant the Serbian player an exemption to play in the Australian Open without proof of vaccination.

European governments — unable to halt, or even slow, the spread of infections — are zeroing in on the unvaccinated as part of efforts to protect their health services from being swamped.

While vaccines don’t completely stop transmission, research suggests they reduce the chance of severe symptoms from Omicron. That should mean less pressure on hospitals, and especially intensive care units.

Data in the UK show a far higher hospitalisation rate among those who haven’t had a vaccine.

While Johnson has said he favours a voluntary approach to vaccinations, his frustration with anti-vaxxers has boiled over.

“I want to say to the anti-vax campaigners, the people who are putting this mumbo jumbo on social media, they are completely wrong,” he said. Given the “tragedy” going on, “it’s time that I and government call them out on what they’re doing,” he said.