A market that was supposed to suffer a ballooning surplus instead surpassed $80 a barrel last week as global demand shrugged off the omicron variant, while a host of supply constraints hit producers from Canada to Russia.

With investment banks calling for higher prices, and options contracts invoking the prospect of crude spiralling above $100, the commodity is threatening to intensify the inflationary pain felt by big consumers.

Such a rally would be bad news for fuel-hungry countries. It would also be a big blow to US President Joe Biden, who invested a lot of time and effort in jawboning prices lower and orchestrating a global release of strategic petroleum reserves.

“The bullish sentiment has regained the narrative,” said Michael Tran, a commodities strategist at RBC Capital Markets. “With improving demand, tightening inventories, and questions of Opec’s ability to ramp further, the directional arrows of progress point to further optimism.’’  Opec is an oil cartel of 13 oil-producing countries.

Movements in the price of oil are felt more keenly and quickly than any other commodity because it passes almost immediately into the cost of end-products like petrol, diesel and jet fuel. In January, there were riots across Kazakhstan after the government there allowed the price of liquefied petroleum gas — a key road fuel — to surge.

The dynamic means prices will be monitored closely by central banks that are trying to keep a lid on inflation while fostering economic growth as nations emerge from the Covid-19 pandemic. 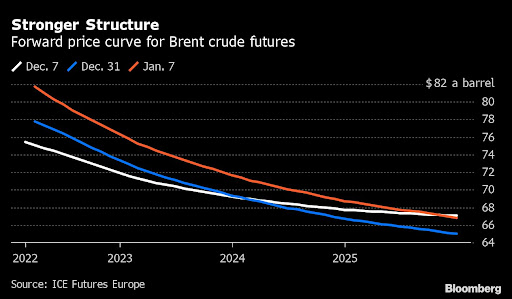 In terms of petroleum demand, Opec and its producer-nation allies have signalled they’re confident the virus won’t derail the recovery, and will continue with their strategy of gradually restoring output halted during the pandemic.

A deep freeze in Canada and the northern US is disrupting oil flows, boosting prices just as American stockpiles decline. Russia failed to boost oil output in December despite a generous ramp-up in its Opec+ quota, indicating the country has deployed all of its available production capacity. Protests in Kazakhstan have led to a temporary adjustment in production at the giant Tengiz oilfield, the nation’s largest.

Likewise, Libya — which managed to pump more than 1-million barrels a day every month in 2021 — is now producing about 25% less than that, while in Nigeria, flows of the once-key export-grade Bonny Light are trickling out with delays. As recently as 2020 they averaged in excess of 200,000 barrels a day. In December, the country pumped 1.35-million barrels a day of crude, according to oil ministry data. That would be the lowest in years, according to data compiled by Bloomberg.

As well as headline prices, the forward curve for oil has turned more bullish too. More immediate contracts are commanding larger premiums to later months, an indication that buyers are willing to pay higher to secure barrels more quickly. Brent futures for March are trading at about 70 US cents a barrel higher than for April contracts. That compares with about 35c a month earlier.

The physical market in the US is also pointing to tight supplies — key oil grades have strengthened in recent days as export demand remained steady and the cold weather disrupts supplies.

Longer term, US shale output is showing signs of tepid growth. Most publicly traded oil companies have refrained from opening their spigots even as prices have risen as shareholders are still saying they don’t want to see explorers boosting output. And so far, it doesn’t appear as though $100 will change that.

In options markets, bullish bets on US crude and Brent climbing above $100 this year and next have risen this week. More than 120,000 lots of US and Brent crude $100, $125 and $150 call options have traded this week. In barrel terms, that’s the equivalent of more than 60 supertankers full of crude being traded in five days.

And while the Biden-led release of strategic oil reserves hasn’t kept prices down for long, his administration has left the door open to further action if needed.

The threat of the US Federal Reserve raising rates to combat rising inflation could also weigh on oil as it boosts the dollar, which makes oil more expensive for holders of other currencies.

But for now, the market is staying bullish.

Jeff Currie, Goldman Sachs Group’s head of global research, said in a Bloomberg TV interview that  only two countries in the world — Saudi Arabia and the United Arab Emirates — can pump more today than they did in January 2020 before the pandemic really hit demand. That could see the oil market tighten over the next three to six months, he said.

Morgan Stanley expects Brent to climb to $90 a barrel by the third quarter. It estimates that observable stockpiles fell by about 690m barrels in 2021.

“We suspect that further strength lies ahead,’’ analysts at the bank including Martijn Rats said. “With the prospect of low inventories and spare capacity by the second half, further demand recovery into 2023, and still limited investments being made, the oil market appears to be heading for a period with little margin of safety.”

No international oil companies are expected to take part in the bidding process at this point, the sources say
Companies
2 weeks ago

Oil falls after Opec+ sticks to deal on hikes in output

Oil falls after Opec+ sticks to deal on hikes in output