How going green could result in higher inflation in eurozone 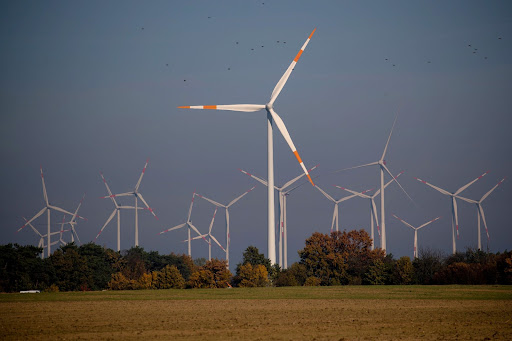 The EU wants to become the world’s first carbon-neutral region by 2050. Picture: BLOOMBERG

The European Central Bank’s (ECB’s) inflation forecasts may need to be revised upward because of the continent’s attempts to cut carbon emissions and transition to green energy, executive board member Isabel Schnabel said.

“In an environment of large excess savings and protracted supply disruptions, the energy transition may lead to inflation remaining higher for longer, thereby potentially raising the risks of inflation expectations destabilising,” Schnabel said in a speech to the American Economic Association on Saturday, adding that the ECB would need to act in such a scenario.

The comments come after data on Friday showed inflation unexpectedly accelerated to 5% in December, setting a record in the history of the common currency. That complicates the ECB’s central thesis that the surge in prices in recent months will fade as supply tensions unwind and energy costs cool.

The ECB’s latest economic projections see inflation hitting 3.2% in 2022, before slowing to 1.8% in 2023 and 2024. Yet Schnabel said the technical assumptions on the energy component in those forecasts are “surrounded by significant uncertainty”.

“The decline of headline inflation to levels below 2% at the end of the projection horizon hinges on the assumption, derived from futures curves, that in 2023 and 2024 energy is not expected to contribute to headline inflation. History suggests that such a profile would be unusual.”

An analysis “suggests that it is enough for oil prices to remain at November 2021 levels for HICP [harmonised index of consumer prices] inflation in 2024 to reach” the ECB’s 2% price target, she said.

While the energy transition poses an “upside risk” to the ECB’s inflation forecasts, “there are no signs of broader second-round effects”, Schnabel said.

The EU wants to become the world’s first carbon-neutral region by 2050, an effort known as the green deal. It is a central pillar of the EU’s so-called next generation plan as well as its next seven-year budget.

Schnabel also said a carbon tax, like the one proposed by the EU, differs from an adverse oil supply shock and might be consistent with a “modest positive impact”, which could in turn force the ECB to act to maintain price stability.

President Christine Lagarde said in December that inflation is likely to remain elevated in the near term before slowing in 2022 to settle below the 2% target. Bank of France governor Francois Villeroy de Galhau has also called for calm, saying recently that inflation is “now close to its peak”.

The IMF's deployment of billions, often without conditions, to help the world deal with the pandemic is causing concern that it is abandoning its ...
Business
1 week ago

Nagel will succeed Jens Weidmann, who leaves at the end of 2021
News
1 month ago