Prosecutors said the 25-year-old, who was unarmed, was murdered ‘because he was a black man running down the street’ 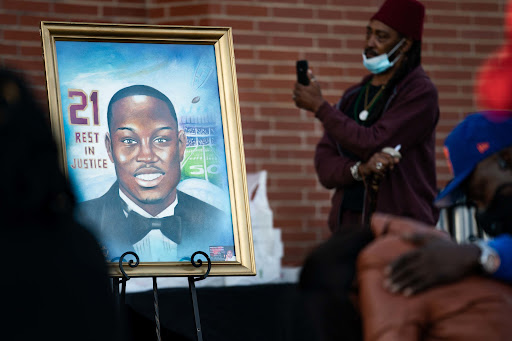 The three white men convicted of murder in the shooting death of Ahmaud Arbery while he jogged through their quiet Georgia neighborhood almost two years ago were sentenced Friday to life in prison, though one of them will be able to seek parole after 30 years. Picture: BLOOMBERG

The three white men convicted of murder in the shooting death of Ahmaud Arbery while he jogged through their quiet Georgia neighbourhood almost two years ago were sentenced Friday to life in prison, though one of them will be able to seek parole after 30 years.

Travis McMichael, his father Greg McMichael and their neighbour William “Roddie” Bryan were found guilty in November of felony murder and other charges after a two-week jury trial, which included video of the black jogger’s shooting that was captured by Bryan.

Georgia Superior Court judge Timothy Walmsley, who was required by state law to give the men life behind bars, denied a request by the McMichaels to allow them the possibility of eventual parole. Walmsley said Bryan can seek parole after 30 years. Prosecutors chose not to pursue the death penalty.

Arbery was “hunted down and shot” in a “chilling, truly disturbing scene,” the judge said just before handing down the sentence. “He was killed because individuals here in this courtroom took the law into their own hands.”

Travis McMichael fired three blasts from a shotgun in a struggle with Arbery after the chase, while Greg McMichael joined his son in the pursuit. Bryan helped trap Arbery with his truck.

The three men didn’t react to the judge’s decision. After the sentencing, prosecutors asked the judge to bar the men from making any money on book or movie deals related to their case, unless that money is directed to a fund for the Arbery family. Walmsley said he’d rule later on the request.

Evidence presented at trial showed that on February 23 2020, Arbery had wandered through an unsecured home under construction for a few minutes while jogging through the neighbourhood, which he’d also done on previous occasions. Prosecutors said the 25-year-old, who was unarmed and didn’t take anything from the site, was murdered “because he was a black man running down the street,” echoing a 911 call one of the defendants made.

Lawyers for the three killers had claimed at trial that the shooting of Arbery was in self-defence, after he resisted an attempted citizen’s arrest under state law. But prosecutors argued successfully that the defense was untenable because it was the three defendants who initiated the conflict by chasing him down with their trucks and cornering him.

Before announcing the sentences, Walmsley said Arbery must have felt “terror” during the five minutes he was chased through the neighbourhood. “It’s a tragedy on many levels,” Walmsley added.

Earlier in the day, Arbery’s parents and sister appeared in court to request the men be denied any chance of parole.

Arbery was killed “in broad daylight” while he was “doing what he loved more than anything — running,” his father Marcus Arbery said. “That’s when he felt most alive, most free — and they took all that from him,” he said. “When I close my eyes, I see his execution in my mind, over and over. I’ll see that for the rest of my life.”

Arbery’s mother Wanda Cooper-Jones told Walmsley the three men deserve the maximum sentence because they knew exactly what they were doing when they “chose to target my son” for running through their neighbourhood.

“They chose to treat him differently than other people who frequently visited their community,” she said. “And when they couldn’t sufficiently scare him or intimidate him, they killed him.”

Arbery’s sister, Jasmine, fought back tears as she described her brother’s broad nose, his athletic build, his love of running outdoors and his dark skin “that glistened in the sunlight like gold.”

“These are the qualities that made these men assume Ahmaud was a dangerous criminal and chase him with guns drawn,” she told Walmsley before the sentencing. He “looked like me and the people I love.”

Defense attorneys had urged the judge to give their clients a chance at parole. They said the men didn’t deserve the harshest possible sentence — no chance of parole — because such terms are intended for premeditated murder. While the Arbery family said the men showed a lack of remorse, defense lawyers said their clients weren’t going to provide statements in court that might undermine their defences in a parallel federal case.

Arbery’s name became a rallying cry in the Black Lives Matter protests that swept the US in 2020 after the murder of George Floyd a few months later by a white police officer in Minneapolis. In both cases, viral video of the killings followed by delayed arrests prompted public outrage.

The racially charged case of Arbery’s killers included evidence of how neighbours responded negatively to reports on social media that a black man had been seen in the area. A state investigator also testified that Bryan told him Travis McMichael had used a racial slur while standing over Arbery’s body, and that evidence existed that he’d used such slurs numerous times on social media. The men also failed to offer Arbery medical aid after he was shot.

During her emotional statement, Arbery’s mother drew attention to remarks made about her son during the trial by defense lawyer Laura Hogue, who described Arbery’s “long, dirty toenails” in her closing statement for no discernible reason. The say elicited scorn from family members and legal experts who said she was peddling a racist trope to the mostly white jury.

“I wish he would have cut and cleaned his toenails before he went out for a jog that day,” Cooper-Jones said Friday. “I guess he would have if he’d known he was going to be murdered.”

At the time of the shooting, none of the men had any evidence that Arbery had broken any law or taken anything from the construction site. The owner of the construction site testified that Arbery had never taken anything, and video cameras on the site captured several people in the area — including white people — also exploring the site without permission.

The judge denied numerous requests for a mistrial, including one by a defense attorney who argued that the case should be tossed out because Al Sharpton, Jesse Jackson and Martin Luther King III had joined hundreds of black pastors in protest at the courthouse, calling it an attempt to sway the jury.

The case highlighted problems in the criminal justice system from the start. Former Brunswick Judicial Circuit District Attorney Jackie Johnson, who initially handled the Arbery case, was indicted on charges of violating her oath of office and obstructing police in the matter by working to delay arrests in the case. Greg McMichael worked for her office as an investigator until 2019, and left a voice mail asking her for advice after the shooting.

Charges against the men weren’t brought until months later, when the video of Arbery’s death went viral and the Cobb County District Attorney’s office took the case.