The spread has strained ties between the allies and comes as Okinawa, which is home to several US bases, is posting record infection numbers 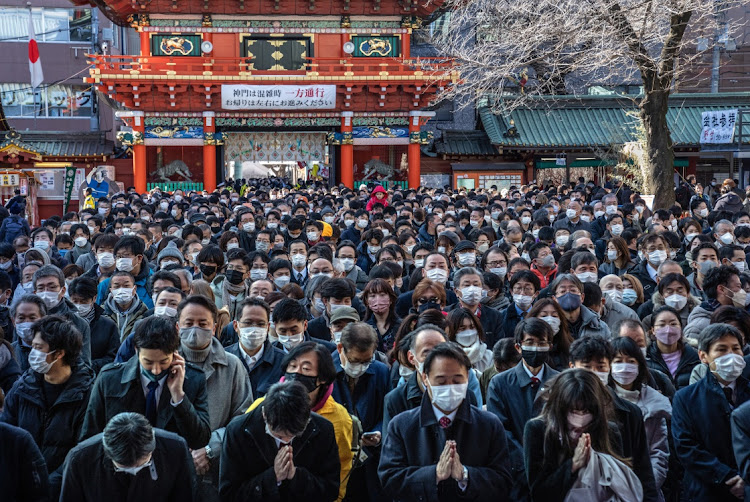 People offer prayers on the first business day of the year at the Kanda Myojin shrine on January 4 2022 in Tokyo, Japan. Picture: GETTY IMAGES/CARL COURT

The US sought to reassure Japan that it was working to protect public health after Tokyo called for restrictions on US troops stationed in the country amid record Covid-19 outbreaks in some areas thought to have stemmed from bases.

At a video meeting Friday, defence and foreign ministers from the two sides agreed on “sharing timely information on incidents and accidents,” to combat Covid-19, they said in a statement. A state department spokesperson who asked not to be named earlier said that preventing the spread of Covid-19 is a top priority for the US and key to alliance readiness.

The spread has strained ties between the allies and comes as Okinawa, which is home to several US bases, is posting record infection numbers. The island prefecture is seeking help to stem the flow of infections that governor Denny Tamaki has blamed at least partly on US troops.

On Friday, Prime Minister Fumio Kishida announced virus curbs would be introduced from January 9-31 in Okinawa, as well as in the prefectures of Hiroshima and Yamaguchi.

The two sides reaffirmed in the virtual meeting their co-operation plays “a critical role as the cornerstone of regional peace, security, and prosperity”, as they look to counter challenges posed by the likes of China and North Korea, the statement said. The talks took place virtually because of the spread of the omicron variant of Covid-19, and Defense Secretary Lloyd Austin remains in quarantine after becoming infected with the virus.

Foreign minister Yoshimasa Hayashi told reporters after the meeting Japan asked the US to reinforce Covid-19 measures at US military facilities, including restrictions on going out, and said he was told by secretary of state Antony Blinken that the Japanese requests were understood clearly.

Hayashi was underscoring a similar message he conveyed by phone to Blinken the previous day, according to a statement issued by Japan’s foreign ministry. US Forces Japan said in a statement issued after that call that mitigation efforts would be stepped up for all military installations across the country.

Pacifist Japan relies heavily on its only treaty ally, the US, for national security, but local communities have long complained of crime, pollution and accidents associated with the military bases. The spread of the virus adds a new headache for the alliance.

Okinawa recorded 1,414 cases for Friday, its worst level since the pandemic began, national broadcaster NHK said. Yamaguchi, which also hosts a US Marine base, is seeing an unprecedented surge, while Hiroshima is adjacent to Yamaguchi.

Japan’s number of daily infections nationwide is forecast to leap to more than 5,000 Friday, broadcaster TBS said, a figure dwarfed by the more than 1-million cases recorded in the US earlier in the week. Tokyo confirmed 922 infections on Friday, also the worst since September and 12 times the level a week ago.