But the world tennis male number one is not being held against his will, Australia assures 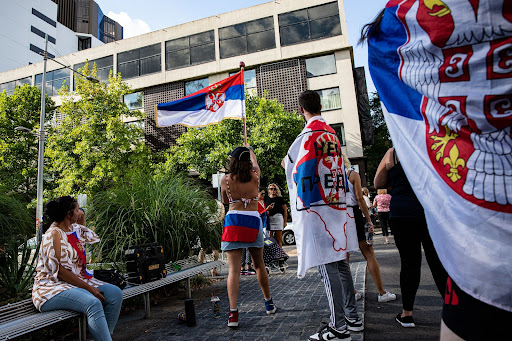 The Australian government insists world tennis No. 1 Novak Djokovic isn’t being held against his will as the vaccine-mandate critic remains confined in a hotel used to detain refugees and asylum seekers. Picture: BLOOMBERG

The Australian government insists world tennis male no. 1 player Novak Djokovic is not being held against his will as the vaccine-mandate critic remains confined in a hotel used to detain refugees and asylum seekers.

Djokovic “is not being held captive in Australia,” home affairs minister Karen Andrews said in a radio interview on Friday. “He is free to leave at any time that he chooses to do so and Border Force will actually facilitate that.”

The player has been held by authorities since late Wednesday when he landed in Melbourne, where he is seeking a record 21st Grand Slam victory by adding to his nine Australian Open singles titles. Border Force officials said on Thursday the Serbian star offered insufficient proof to enter the country under current pandemic rules and will be deported.

Djokovic’s lawyers have mounted a legal challenge against the federal decision that overruled a Victoria state vaccine exemption for the tennis champion that sparked a widespread uproar. He will remain in detention following a court decision to adjourn his appeal to the visa cancellation, the Associated Press reported on Thursday. The proceedings will resume on Monday.

The incident has triggered tension between Serbia, where Djokovic is seen as a national hero, and Australia, which is battling record daily virus cases after most of the nation abandoned a Covid-19-Zero strategy to eliminate infections in the community.

Serbian President Aleksandar Vucic told reporters in Belgrade on Thursday that the Djokovic incident was part of “a broad political campaign” in Australia, and urged authorities there to move him from the “infamous” hotel to a rented house where he can train. Serbia’s government summoned Australian ambassador Daniel Emery for an explanation on Friday.

“Novak Djokovic is not a criminal, a terrorist or an illegal migrant, but is being treated as one by the Australian authorities, which causes understandable resentment by his fans and by Serbia’s citizens,” the government in Belgrade said in a statement. “Djokovic is a victim of a political game and was lured to travel to Australia so that he can be humiliated.”

For now, Australia’s government is holding the line that Djokovic has broken the rules and needs to be deported.

“There’s clearly been a mistake in terms of what Novak Djokovic or his team understood in terms of the entry requirements, or indeed people have acted in misleading ways,” finance minister Simon Birmingham said in a television interview Friday. “Yes, we have taken the steps of reopening, but being double vaccinated has clearly always been a requirement.”

‘There should be no special rules for Novak Djokovic at all,’ Australian Prime Minister Scott Morrison says
World
3 weeks ago

Spaniard says he feels sorry for his unvaccinated rival, who has been denied entry into Australia
Sport
3 weeks ago
Next Article