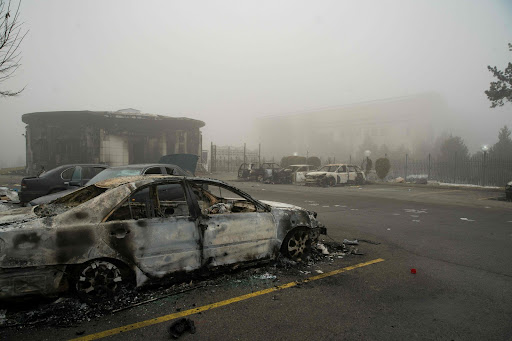 Kazakhstan’s president said authorities have largely restored order across the country after a sweeping crackdown on protesters by security forces reinforced by the deployment of Russian troops to the Central Asian nation.

President Kassym-Jomart Tokayev vowed on Friday to continue operations against what he called “terrorists” after telling a meeting of law enforcement officials that the joint security forces from Russia and other former Soviet allies had begun to arrive in Kazakhstan, according to a post on his website.

Dozens of antigovernment protesters have been killed and hundreds wounded by security forces, with more than 3,000 detained, after Tokayev pledged to respond “harshly” to put down the biggest challenge to Kazakhstan’s leadership since independence in 1991. After blaming the protests on unspecified outside forces, he took the unprecedented step of asking Russia and other members of the Collective Security Treaty Organisation (CSTO) to send troops to Kazakhstan in support of his rule.

Intense shooting was reported in the largest city, Almaty, as troops moved to clear the main Republic Square, according to Khabar TV. Security services regained control of all government buildings in the city, including the local administration building and the presidential residence, it reported.

Tokayev imposed a state of emergency and internet access was cut in much of the giant country, which is the size of Western Europe and rich in energy and minerals.

At least 26 people have been killed during security operations, the interior ministry reported on Friday. Earlier, it said that 18 security officers had died and 748 were injured in clashes with protesters.

US secretary of state Antony Blinken urged the government to seek a “peaceful, rights-respecting resolution to the crisis” after a phone call on Thursday with his Kazakh counterpart, Mukhtar Tileuberdi, the state department said in a statement.

The dramatic intervention by the Kremlin-led CSTO military bloc to deploy what they called  “peacekeeping forces” followed reports of Kazakh security forces surrendering to demonstrators. The alliance is dominated by Russia but includes Armenia, Belarus, Kazakhstan, Kyrgyzstan and Tajikistan.

Prices for uranium surged amid the unrest in the world’s largest supplier of the nuclear fuel, though Kazakhstan’s top miner, Kazatomprom, said it will meet all delivery deadlines. There was no sign of a disruption to oil output, the country’s biggest export.

With communications disrupted, it was difficult to get a clear picture of how successful and extensive the authorities’ crackdown is in attempting to restore order.

Neither the CSTO nor Tokayev’s government indicated what outside forces they blamed for the protests, which appeared to have started spontaneously.

Russia’s foreign ministry said on Thursday the unrest was “an attempt inspired from outside to violently undermine the security and integrity of the state with the use of organised and trained armed units”.

The action marks the second major move by the Kremlin in as many years to shore up an ally facing upheaval. In 2020, President Vladimir Putin stepped in to back Belarusian leader Alexander Lukashenko’s crackdown on popular protests, which drew sanctions from the US and its allies. The Russian leader is now involved in high-stakes negotiations with the US and Europe over a simmering conflict regarding Ukraine.

The protests included calls for longtime leader Nursultan Nazarbayev to give up the reins of power. Nazarbayev, 81, turned over the presidency to Tokayev in 2019 but retained substantial influence in the country’s repressive political system. He hasn’t been seen in public since the crisis erupted.

Tokayev accepted his government’s resignation and removed several top security officials on Wednesday in an attempt to appease the protesters. He also said he was taking over as head of the security council from Nazarbayev and pledged to stay in the capital, Nur-Sultan, “whatever happens”.

In 2021, Kazakhstan became the world’s second-largest centre for bitcoin mining after the US
World
1 week ago

So far violent protests in the former Soviet state have not disrupted its flow of 1.6-million barrels of a day
Markets
1 week ago
Next Article

1.
Why you would soon be unable to live in Kuwait
News
2.
AT&T and Verizon to delay 5G deployment near ...
World / Americas
3.
Microsoft to buy Call of Duty maker Activision ...
News
4.
Goldman shares tumble as equities trading slides, ...
News
5.
Lloyd’s of London considers moving from landmark ...
News

1.
Why you would soon be unable to live in Kuwait
News
2.
AT&T and Verizon to delay 5G deployment near ...
World / Americas
3.
Microsoft to buy Call of Duty maker Activision ...
News
4.
Goldman shares tumble as equities trading slides, ...
News
5.
Lloyd’s of London considers moving from landmark ...
News