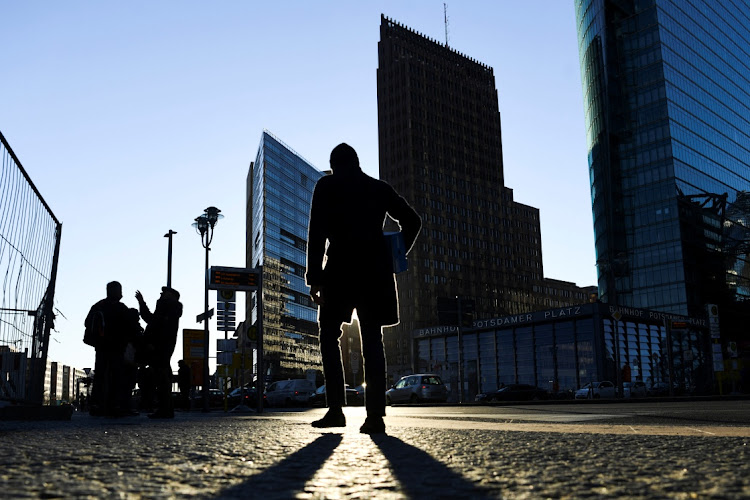 A man walks near the public square "Potsdamer Platz" during a sunny winter day, amid the Covid-19 pandemic in Berlin, Germany, in this January 6 2022 file photo. Picture: REUTERS/ANNEGRET HILSE

Germany is poised to tighten restrictions on access to restaurants and cafes in an effort to keep the rapidly spreading Omicron strain of the coronavirus in check.

In a video call later on Friday, Chancellor Olaf Scholz and regional leaders are expected to agree that people who are vaccinated or recovered will still have to provide a negative test. They’re seeking to tackle the latest surge in infections without resorting to sweeping lockdown measures like shuttering businesses and schools.

“Gastronomy is a problem as you often sit for hours without a mask,” health minster Karl Lauterbach said late on Thursday in an interview with RTL television. “We have to reduce contact even further.”

People who have had a booster shot would be exempt from the testing requirement, which is to take effect by January 15, according to draft proposals circulating in the German media.

Germany’s Covid infections have been rising rapidly in recent days, though the country has yet to experience the dramatic, Omicron-fuelled surge seen in countries like Britain, France and Ireland.

Officials are also considering allowing people to test out of quarantine after seven days instead of the current 14 days to avert staff shortages in critical services, according to draft proposals cited in the German media. People with a booster shot would be exempt from having to isolate.

The seven-day incidence rate per 100,000 people declined through most of December but has since risen back above 300, according to the latest data from the RKI public health institute. It’s still well short of a peak above 450 reached in late November, and pressure on intensive care units has eased considerably since then. 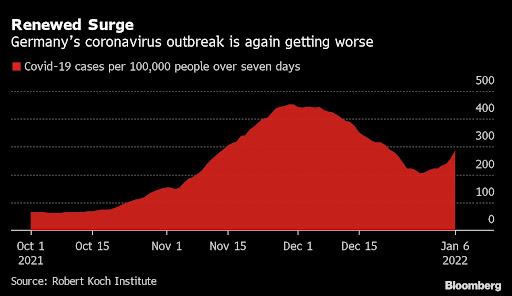 Covid-19 infections are rising again in Germany, but the country has not yet suffered the Omicron-fuelled surge seen in Britain. Picture: BLOOMBERG

Europe’s biggest economy is already in what some officials have termed a “lockdown of the unvaccinated”, with limits on access to non-essential stores, restaurants and theatres. There are also strict hygiene rules and curbs on the size of public gatherings that apply to all citizens.

Bremen mayor Andreas Bovenschulte, who will take part in Friday’s talks, said some of Germany’s 16 states have already introduced tighter contact restrictions, including a testing requirement for cultural and sporting events as well as restaurants and cafes.

Federal and regional officials will also make an “urgent recommendation” for people to wear FFP2 masks in stores and on public transport, Bovenschulte said Friday in an interview with ARD television.

“If we want to be able to live with the coronavirus — and I think that’s the correct goal — then we must not forget that it’s still a dangerous infectious disease and we have to do everything to limit the spread,” he said.

Lauterbach warned on Thursday that Omicron could persist longer than expected and even be replaced by other variants that are just as contagious but even more dangerous. Some form of mandatory vaccination is the best protection, he said.

Germany’s Bundestag is expected in the coming weeks to start debating the introduction of a vaccine mandate, and officials have said it could take effect from around March.