Where should you seek shelter from global market storm?

European stocks are a good place to seek shelter from the higher rates-fuelled global equity rout, according to strategists at Goldman Sachs.

“Rising rates should favour European equity given the greater share of shorter-duration and rate-sensitive sectors in the index,” strategists led by Sharon Bell wrote in a note on Thursday. Europe also differs from the US “in that valuations for much of the market do not look particularly stretched versus past multiples,” they said.

A global market rout started in the US on Wednesday after the Federal Reserve signalled interest-rate hikes may be more aggressive than many had expected. Technology shares — valued on future growth expectations — saw particularly intense selling because of elevated valuations.

Moves for European markets have been muted compared to those in the US and Asia, with the benchmark Stoxx 600 index falling as much as 1.6% in early trading on Thursday before paring declines. The gauge is still in positive territory — up 0.2% — in 2022, while the S&P 500 has dropped 1.4% and the tech-heavy Nasdaq is down 3.4% so far in 2022. 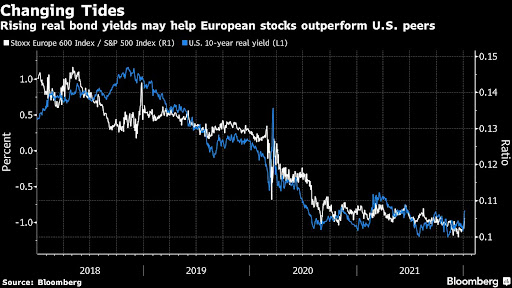 While European stocks have consistently underperformed US peers since the global financial crisis, now “the scales are tipping slightly in favour of Europe”, according to Goldman’s strategists. One big difference is fiscal policy, with spending set to expand further in Europe — including via a green stimulus package — in contrast to the US, where fiscal support is expected to drop off.

Meanwhile, the “earnings gap is closing” with forward earnings per share estimates stronger in the last year for Europe than the US, Bell wrote. The strategists recommend European banks and energy stocks, and single out healthcare as their preferred “cheap” growth area.

Goldman is not alone in seeing Europe as a potential winner in the post-pandemic return to normalcy. “European equities can wobble around the first Fed hike, but usually end up recovering,” Citigroup strategists led by Beata Manthey wrote in a note on Wednesday.

“Higher yields could help traditional value trades such as UK equities and pan-European financials,” they said.

Gold knocked by signals of faster US interest rate hikes

Record JSE to grapple with weaker Asian markets on Wednesday

Oil rises as investors expect Opec+ to stay the course

Record JSE to grapple with weaker Asian markets on Wednesday

Oil rises as investors expect Opec+ to stay the course