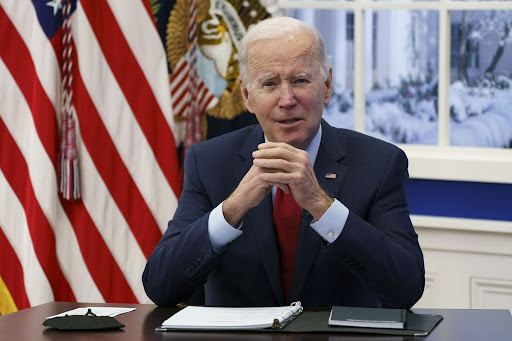 President Joe Biden blamed Donald Trump directly for the insurrection at the US Capitol a year ago, saying the former president turned to violence to try to overturn the election he lost.

“For the first time in our history, a president not just lost an election, he tried to prevent the peaceful transfer of power as a violent mob breached the Capitol,” Biden said in a speech on  Thursday in the building’s Statuary Hall, commemorating the first anniversary of the insurrection.

The president on Thursday will also call on legislators to pass a voting rights law intended to rebut changes sought by Trump loyalists in state governments across the nation that would limit access to absentee voting and strengthen identification requirements.

Biden said that after Trump “rallied the mob to attack” the Capitol, he sat “in the private dining room off the Oval Office in the White House, watching it all on television and doing nothing for hours as police were assaulted, lives at risk, the nation’s capitol under siege”.

The speech is part of a day of commemoration, featuring remarks by House speaker Nancy Pelosi, along with other Democrats, and discussions about democracy. Trump cancelled a media conference originally scheduled for Thursday at his Palm Beach, Florida, estate at the urging of allies.

Vice-president Kamala Harris said at the Capitol on Thursday, ahead of Biden’s remarks, that America’s democracy remains at risk.

“On January 6th, we all saw what our nation would look like if the forces who seek to dismantle our democracy are successful. The lawlessness, the violence, the chaos,” she said. “What was at stake then, and now, is the right to have our future decided the way the constitution describes it.”

She applauded legislators for returning to the Capitol after the riot to finish counting electoral college votes, certifying Biden’s victory.

“Their resolve — not to yield, but to certify the election — their loyalty, not to party or person, but to the constitution of the United States; that reflects its strength,” she said.

Biden’s address from a location that was swarmed a year ago by Trump supporters seeking to block certification of his election is a rhetorical opportunity to reorient his presidency away from the resurgent coronavirus, fighting within his party and persistent inflation. Biden, who has seldom mentioned his predecessor by name since taking office, intends to focus on bigger themes, such as the “battle for the soul of the nation” that he described on the campaign trail.

It’ll be crucial for Biden to recapture political momentum and support from moderate voters horrified by the harsh partisanship and extremist rhetoric that crested on January 6. The new year will be politically decisive with midterm elections approaching and legislators weighing his signature domestic legislative tax and spending plan.

The simplest way for Biden to reverse his sagging approval ratings may be to re-engage with Trump as a political foil. The president’s approval fell to just 40% of Americans in a USA Today/Suffolk poll released last week, driven by independents who have soured on his performance.

The president and other Democratic leaders are particularly hopeful the anniversary could bolster the prospects for their voting rights bill. Biden plans to continue his push for the legislation with a speech on Tuesday in Atlanta.

Senate majority leader Chuck Schumer has said he would try again to pass the measure in coming days, and push for changes to the Senate rules that would make it easier to overcome Republican opposition if GOP legislators use filibuster procedures to halt passage.

But administration officials have also said Biden was personally offended by both the role Trump played in encouraging supporters who then marched on the Capitol, and the subsequent attempts by Republican legislators to downplay or sidestep the events of that day. Biden will use the occasion to issue a dire warning about flirtations with anti-democratic behaviour.

“I would expect President Biden will lay out the significance of what happened at the Capitol and the singular responsibility President Trump has for the chaos and carnage that we saw,” said White House press secretary Jen Psaki. “And he will forcibly push back on the lies spread by the former president and attempt to mislead the American people and his own supporters, as well as distract from his role in what happened.”

A spokesperson for Trump said Biden’s criticism was an effort by the president to deflect attention from problems like rising inflation.

“Biden has failed to unify his own party around his radical agenda, let alone unify the country around real solutions,” Trump spokesperson Taylor Budowich said in a statement. “So, it is unsurprising that he is going to spend January 6th trying to further divide our nation.”

Republican GOP leaders are planning to keep a low profile: House minority leader Kevin McCarthy has not announced any events to mark the anniversary, while Senate majority leader Mitch McConnell is planning to travel to Georgia for the funeral of former senator Johnny Isakson.

Democrats, by contrast, have planned what Pelosi described to colleagues in a letter as “a full programme of events” as part of “this solemn observance”. All events will be live-streamed, so officials who are not in Washington can participate.

The activities will include a discussion beginning at 1pm Washington time among historians “about the narrative of that day”. That is to occur after the opening of a session of the House at noon that will include a prayer, pledge and a moment of silence.

The historians’ conversation will be moderated by librarian of Congress Carla Hayden and will include the authors Doris Kearns Goodwin and Jon Meacham.

Later, House members led by representative Jason Crow, a Colorado Democrat, will share their recollections of January 6, with testimonials to reflect on what happened. Democrats are also expected to release a new report on Capitol security, and Pelosi will participate in a special television programme on CNN Thursday night.

While leading Republicans have opted to steer clear of the anniversary, two conservative firebrands — representatives Matt Gaetz of Florida and Marjorie Taylor Greene of Georgia — are holding an afternoon news conference they’re billing as a “Republican response”.

They are also expected to appear on the podcast of former Trump aide Steve Bannon, who is under indictment for his refusal to co-operate with the congressional committee investigating the January 6 attacks.

Once thronged by 2.5-million visitors a year, Capitol hallways echo with emptiness
World
3 weeks ago

Letitia James is conducting a probe into the Trump Organization focused on whether the firm had manipulated the value of key assets for tax and ...
News
1 month ago
Next Article