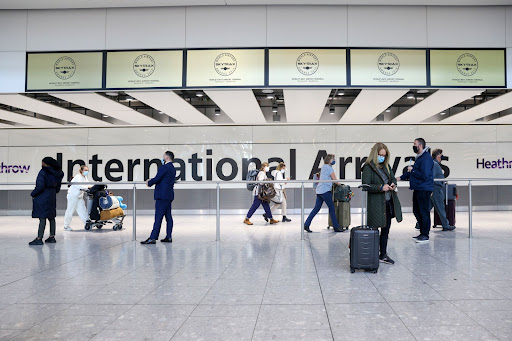 The UK toughened its entry requirements in November in a setback to what had been shaping up as a broad recovery for air travel. Picture: BLOOMBERG

The UK is considering scrapping its pre-departure Covid-19 test requirement for vaccinated travellers entering the country, according to people familiar with the matter, after airlines hard-hit by the Omicron variant lobbied for the rules to be eased.

The government is likely to retain a mandate for vaccinated arrivals to stay in quarantine until they’ve done a test within two days of entering the country, said the people, who asked not to be identified before a decision was made. Ministers are scheduled to hold their regular three-week review of travel rules on Wednesday.

Easing the rules would bring some relief to airlines after the spread of Omicron stifled air travel over the year end holiday. While governments have tightened border rules in response to the new variant, evidence is growing that it produces milder symptoms than earlier Covid-19 waves.

The UK, one of the first countries to identify Omicron’s presence, has been subject to targeted restrictions from nations including Germany and France. Hong Kong on Wednesday banned flights for two weeks from a number of countries including Britain and the US.

Along with other governments, the UK toughened its own entry requirements in November, in a setback to what had been shaping up as a broad recovery for air travel. The clampdown stalled progress towards the use of vaccine passports that had taken hold over summer.

Airlines, which have railed against border restrictions throughout the two-year coronavirus crisis, stepped up a campaign on Wednesday to lift the testing mandate in full, arguing that the significant cost is crushing demand.

Manchester Airports Group and industry lobby Airlines UK published research maintaining that the removal of testing requirements on international travel won’t affect Covid-19’s spread and that domestic restrictions were the only way to stem the virus within Britain.

The airline industry has faced ever-changing travel rules through the course of the pandemic.

In May, the UK introduced a so-called traffic light system setting entry requirements by country, with arrivals from places classified as red forced to pay for an expensive hotel quarantine.

The system was revised late in the northern hemisphere summer to rely more on vaccination status. Until the onset of Omicron, travellers from most places who could show they had a full dose of approved vaccines were allowed to enter without testing.

On Tuesday, Prime Minister Boris Johnson said the UK can weather a record wave of Covid-19 without tighter restrictions.

The ship, en route to the island of Madeira for New Year’s Eve celebrations, has been moored in Lisbon’s port for five days due to a Covid-19 outbreak
World
7 months ago

It is now administering fourth doses of the Pfizer-BioNTech vaccine to people over 60 years, health workers and immunocompromised patients
World
7 months ago
Next Article