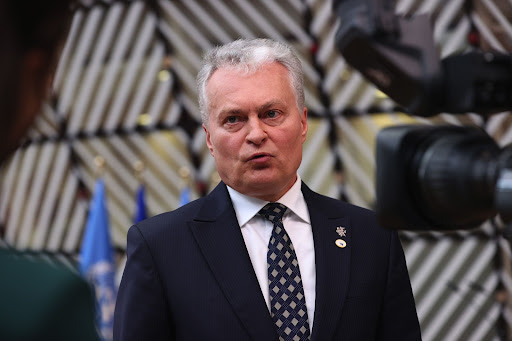 Lithuania’s president has said the government’s decision to allow Taiwan to open a representative office using the island’s name was a mistake, wading into a controversy that’s upended the Baltic nation’s relationship with China.

The criticism by the head of state, Gitanas Nauseda, opens a rift in the country’s leadership after tensions between China and Lithuania triggered a high-level trade dispute between Beijing and the EU. Taiwan opened the office in the capital, Vilnius, in November under the name of Taiwan, a move viewed by the Chinese government as a violation of its one-China principle.

Nauseda, who oversees foreign policy and represents Lithuania at EU summits, said Lithuania and Taiwan are free to open representative offices that hold no diplomatic status and regretted that “the name of the office has become the key factor that now affects relations with China”.

Opening the Taiwanese office was not a mistake, he said in an interview with radio station Ziniu Radijas on Tuesday, “but the name of it was the mistake, something [about] which I wasn’t consulted”.

Chinese foreign ministry spokesperson Wang Wenbin said on Wednesday at a regular media briefing in Beijing that recognising the “mistake” is a step in the right direction “but it is more important to take actions to address the erroneous act.”

China responded to the opening by downgrading diplomatic ties with Lithuania, recalling its ambassador and allegedly halting clearance for Lithuanian exports, which prompted the EU to raise the dispute with the World Trade Organisation (WTO). China has denied it is blocking Lithuania’s exports.

Lithuania pulled out its diplomats from its embassy in Beijing in December after the Chinese foreign ministry demanded the return of the envoys’ diplomatic identification cards.

On Tuesday, the Lithuanian Confederation of Industrialists, the country’s largest business association, said it’s seeking assistance from the Organisation for Economic Co-operation and Development (OECD) in talks with China over halted shipments in ports and economic coercion.

A Taiwanese company purchased 20,400 bottles of Lithuanian rum that China refused to allow into the country to show support for the Baltic nation, according to the South China Morning Post.

Turkey’s lira shed 44% of its value last year as the central bank slashed interest rates under a drive by Erdogan to prioritise credit and exports ...
World
1 week ago

Lapsus$, which claims it gained access to Impresa’s Amazon Web Services account, sent a phishing e-mail to subscribers and tweeted from the ...
World
1 week ago
Next Article