Australia and Japan poised to sign a historic defence pact 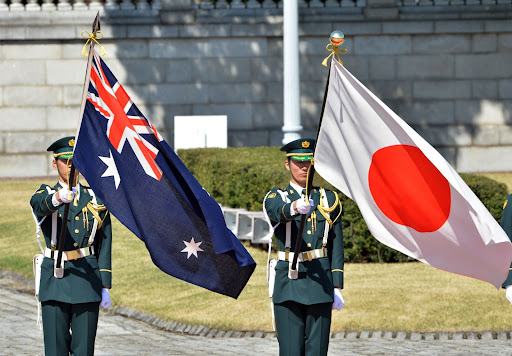 Australia and Japan will sign a ‘historic’ treaty that will strengthen defence and security co-operation during a virtual summit of leaders on Thursday. Picture: BLOOMBERG

Australia and Japan will sign a “historic” treaty that will strengthen defence and security co-operation during a virtual leaders’ summit on Thursday, in a move that could further inflame tensions with China.

The agreement is the first of its type for Japan, other than with the US and the UN, and marks a step closer in a relationship that is often referred to as a “quasi alliance”.

The signing of a reciprocal access agreement will underpin greater and more complex practical engagement between the Australian Defence Force and the Japanese Self-Defence Force, Prime Minister Scott Morrison said in an emailed statement. The pact will provide a clear framework for enhanced interoperability and co-operation, he added.

“This treaty will be a statement of our two nations’ commitment to work together in meeting the shared strategic security challenges we face and to contribute to a secure and stable Indo-Pacific,” Morrison said.

Under Morrison’s watch, Australia’s relations with China — its largest trading partner — have nosedived in the wake of his government’s call in 2020 for independent investigators to enter Wuhan to probe the origins of the coronavirus. Beijing inflicted a range of trade reprisals, including crippling tariffs on Australian barley and wine, while blocking coal shipments.

Japan’s ties with China have also turned chilly over Beijing’s clampdown on Hong Kong and concerns are growing about tensions in the Taiwan Strait.

“We share with Australia the basic values of freedom and democracy,” Japanese chief cabinet secretary Hirokazu Matsuno told reporters on Wednesday. The two leaders plan to discuss matters of mutual concern at their virtual meeting, including national security, the economy and regional affairs, in a bid to strengthen bilateral ties and co-operation towards a free and open Indo-Pacific, he added.

The two countries reached a basic agreement on the reciprocal access agreement in 2020 but faced stumbling blocks, including concern that Australian troops found guilty of serious crimes could be subject to the death penalty in Japan.

Australia signed a strategic defence pact last year with UK and the US that will enable the country to build nuclear-powered submarines, a move that China said would fuel an arms race in the region.

Japanese Prime Minister Fumio Kishida said on Tuesday he had been seeking an in-person summit with Morrison but had set the plan aside to focus on dealing with the latest surge in virus cases.

The move stops short of joining a US-led diplomatic boycott of the Games, but one nonetheless likely to deepen tension with China
World
7 months ago