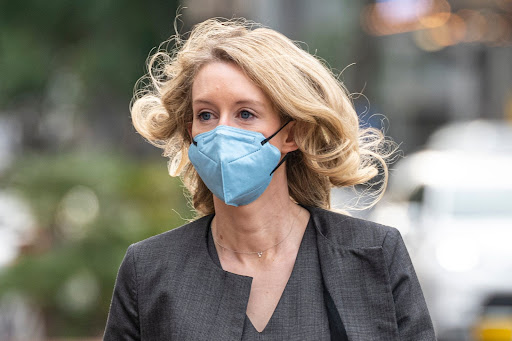 Elizabeth Holmes was found guilty of criminal fraud for her role in building the blood-testing start-up Theranos into a $9bn company that collapsed in scandal. Picture: BLOOMBERG

Elizabeth Holmes has been found guilty of criminal fraud for her role in building blood-testing start-up Theranos into a $9bn company that collapsed in scandal.

A jury in San Jose, California, returned the verdict after hearing three months of testimony that was often technical, heavily contested and, from Holmes herself, shocking. The 37-year-old faces a maximum sentence of 20 years in prison, though she’ll probably get far less than that. Holmes is also likely to appeal her conviction and any sentence she gets.

Holmes stayed perfectly still and upright while the verdict was read. She looked directly at the jurors as they were polled by the judge to determine if the verdict matched their conclusions. There was little reaction in the courtroom to the verdict, beyond the sound of fluttering of keyboards from the media. Holmes’s partner, her mother and father sat still in the front row.

Holmes was convicted of four out of 11 counts of conspiracy and wire fraud and acquitted of four counts. The jury didn’t reach a verdict on three of the counts. Holmes was found not guilty of all charges pertaining to defrauding patients.

“The jurors in this 15-week trial navigated a complex case amid a pandemic and scheduling obstacles,” Stephanie Hinds of the US attorney’s office in San Francisco said in a statement. “The guilty verdicts in this case reflect Ms Holmes’s culpability in this large-scale investor fraud and she must now face sentencing for her crimes.”

Holmes’s fall from celebrity CEO to convicted felon marks one of the most dramatic descents in Silicon Valley history. After deliberating for seven full days, jurors agreed on Monday with prosecutors that Holmes lied to investors over several years about the accuracy and capabilities of Theranos blood analysers.

A parade of witnesses told jurors they were gravely misled by the Stanford University dropout-turned-entrepreneur. They ranged from executives at Walgreens and Safeway to James Mattis, the former US secretary of defence who served on the Theranos board, as well as advisers to investors who poured hundreds of millions of dollars into the company.

The panel of eight men and four women also heard colourful accounts from several Theranos employees about the company’s lab taking dangerous shortcuts to conceal shortcomings with the analysers, and from patients who recounted receiving inaccurate test results that left them anxious about their health.

As was the case with the fate of Theranos itself, Holmes’s defence was tethered to her charisma and credibility. She made the risky decision, unusual in white-collar criminal cases, to testify in her own defence.

The move gave Holmes the final voice in the long trial and served to dampen the testimony of dozens of government witnesses before her but also forced her to make uncomfortable admissions during a gruelling cross-examination.

Elizabeth Holmes was found guilty of criminal fraud after she built her blood-testing startup Theranos Inc. into a $9bn company. A jury in California returned the verdict after hearing three months of testimony. Bloomberg’s Emily Chang reports on “Bloomberg Daybreak: Asia.”

In seven days on the witness box, Holmes alternated between deflecting blame, failing to remember certain events and accepting responsibility for mistakes, even while insisting she didn’t intend to deceive anyone.

The most jolting moments in the courtroom were when Holmes testified she was raped as a student at Stanford University and suffered years of verbal and sexual abuse from her former boyfriend, former Theranos president Ramesh “Sunny” Balwani.

By Holmes’s account, the abuse lasted throughout the decade-long relationship with Balwani and had a profound if incalculable influence on her life. Her legal team’s decision not to call a psychiatrist with expertise in relationship trauma as a witness left it up to jurors how to factor the testimony into their decision.

A prosecutor told the jury in closing arguments that the alleged abuse isn’t relevant to the fraud Holmes was charged with. “In the absence of any evidence linking that experience to the charged conduct, you should put it out of your mind,” assistant US attorney John Bostic told jurors.

Holmes’s defence team tried to convince the jury that she made a sincere effort over 15 years to steer Theranos to success and shouldn’t be punished for failing to achieve her dream. “Elizabeth Holmes was building a business and not a criminal enterprise,” attorney Kevin Downey told jurors.

Michele Hagan, formerly a prosecutor in the San Francisco district attorney’s office, said the jury may have rejected the patient fraud charges because there wasn’t enough evidence of wrongdoing by Holmes. Jurors heard Theranos patients testify their blood-test results falsely led them to believe they had unhealthy conditions.

“I could see any reason for a jury not finding her guilty of those charges,” Hagan said. “I mean, for instance ... the positive HIV [test], well that turned out to be a false positive, so I could see how they could find reasonable doubt there.”

Robert Weisberg, a Stanford University law professor, said the details of the specific counts Holmes was convicted of and those she wasn’t “don’t matter that much since she really had a big broad scheme to defraud and that’s what the jury believed”.

“Her personality defences failed completely,” Weisberg said. “Her claims that she was psychologically undone by Sunny Balwani and so on, because of the conviction on the major fraud counts, it’s clear that those defences failed, and if she avoided conviction on other grounds they were on technical matters.”

The judge allowed the jury to deliver a verdict on only eight of the 11 charges she faced, after they said they were unable to reach a unanimous decision on all of the counts.

Abraham Simmons, a spokesperson for Hinds, had no comment on whether prosecutors would seek to retry Holmes on the three counts for which the jurors were unable to reach a verdict.

After the verdict Holmes walked out the front door of the court and was trailed by media for a block to the Marriott hotel in San Jose. She ignored all questions posed to her. Holmes’s attorneys declined to comment. US district judge Edward Davila said Holmes will remain free on bond for the time being.

Holmes rose to prominence with her promise of a revolution in health care, based on her claims the compact Theranos devices could perform hundreds of diagnostic tests faster, more accurately and cheaper than traditional, bigger machines.

A big selling point was that Theranos analysers could arrive at the results with just a pinprick instead of vials of drawn blood. Holmes cited her own fear of needles as inspiration for the invention, part of the narrative investors and the public heard over years in her promotion of the technology.

By 2015 Holmes was dubbed by Forbes as the youngest female self-made billionaire and was gracing the covers of magazines. But that same year, the Wall Street Journal published stories pointing to flaws in Theranos technology, which led regulators the following year to conclude the machines posed a danger to patient health.

The revelations triggered civil lawsuits, including one Holmes settled with the Securities and Exchange Commission (SEC), and the justice department’s investigation and prosecution. Holmes, Balwani and Walgreens all still face claims over inaccurate blood tests by customers of the pharmacy chain in an Arizona lawsuit.

Balwani, who faces a separate trial in February on the same fraud charges as Holmes, has pleaded not guilty and has denied her abuse allegations.

The founder of health-tech company Theranos is now on trial for fraud in the US. Her story has interesting parallels with that of another start-up ...
Features
3 months ago
Next Article