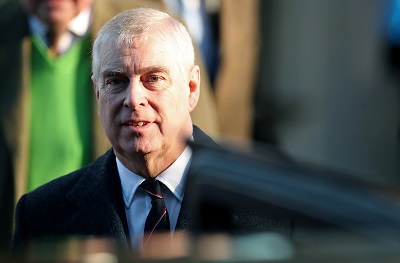 The late financier Jeffrey Epstein’s 2009 settlement agreement with Virginia Giuffre is expected to be made public on Monday, as part of Giuffre’s civil lawsuit accusing Britain’s Prince Andrew of sexual abuse.

Giuffre’s lawsuit accuses Andrew of forcing her to have sex more than two decades ago when she was under 18 at the London home of former Epstein associate Ghislaine Maxwell, and abusing her at two of Epstein’s homes. Giuffre, 38, is seeking unspecified damages in a civil lawsuit filed in Manhattan federal court.

Andrew, 61, has denied Giuffre's assertions and has moved to dismiss the lawsuit, arguing Giuffre is seeking a “payday” from her accusations against Epstein and his associates. The prince has not been accused of criminal wrongdoing.

He argues a confidential agreement Giuffre reached with Epstein, whom she has accused of trafficking her for sex when she was a teenager, shields him from liability. Andrew’s lawyer says the deal covers “royalty” and that Epstein intended for it to cover anyone Giuffre might sue.

Giuffre’s civil case against Andrew is still in its early stages. US district judge Lewis Kaplan has said a trial could begin from September to December of 2022 if no settlement is reached.

A hearing on Andrew’s motion to dismiss the case is scheduled for Tuesday morning.

Andrew gave up many royal duties in November 2019, stating that his association with Epstein had become a “disruption to my family’s work”.

Giuffre’s suit is separate from the criminal trial against Maxwell that concluded last week. Maxwell, 60, was convicted of recruiting and grooming girls for Epstein to abuse from 1994 to 2004.

Giuffre’s claims did not form the basis of any of the charges Maxwell faced, and she did not testify for either side during the three-week criminal trial.

Epstein killed himself in a Manhattan jail cell in 2019 at the age of 66 while awaiting trial on charges of sexual abuse.

Jury found her guilty of five of the charges against her, including sex-trafficking of a minor, which carries a possible prison sentence of up to 40 ...
News
7 months ago

Money was transferred to the prince days after he borrowed a similar amount from the bank, which is controlled by the businessman’s family
News
8 months ago
Next Article