Airlines have said the new variation of 5G mobile service might interfere with aircraft electronics, posing a safety hazard 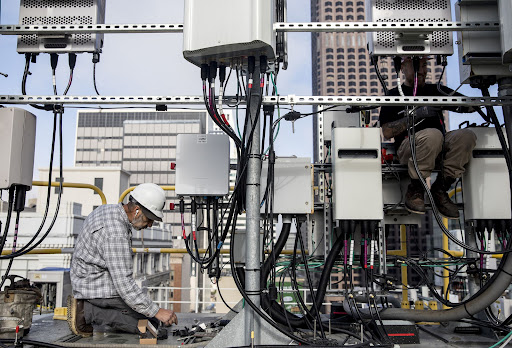 AT&T and Verizon rejected a US request to delay this week’s launch of a new variation of 5G mobile service that airlines said might interfere with aircraft electronics, posing a safety hazard. Picture: BLOOMBERG

AT&T and Verizon Communications rejected a US request to delay this week’s launch of a new variation of 5G mobile service that airlines said might interfere with aircraft electronics, posing a safety hazard.

But the CEOs of the two telecommunications giants also said in a joint letter on Sunday that they would be willing to commit to a six-month pause in deployment near certain airports that will be selected in negotiations with US officials and the aviation industry.

The US request seeks steps that would be “to the detriment of our millions of consumer, business and government customers,” Verizon CEO Hans Vestberg and AT&T’s John Stankey wrote to transportation secretary Pete Buttigieg and Steve Dickson, administrator of the Federal Aviation Administration.

In a letter on Friday, the US officials asked the wireless providers to delay the planned January 5 start of the new service. The officials forecast possible “widespread and unacceptable disruption” to air traffic as planes avoid airports bathed in 5G signals that could affect electronics used during landings.

The carriers cast the 5G rollout as a priority, citing a race with China to offer extensive high-speed mobile broadband, and escalating demand for wireless service amid the Covid-19 pandemic.

“Your proposed framework asks that we agree to transfer oversight of our companies’ multi-billion dollar investment in 50 unnamed metropolitan areas representing the lion’s share of the US population to the FAA for an undetermined number of months or years,” Vestberg and Stankey wrote. “Even worse, the proposal is directed to only two companies.”

The wireless executives said agreeing to the proposal would be “an irresponsible abdication of the operating control required to deploy world-class and globally competitive communications networks.”

The new 5G signals would use a set of airwaves made freshly available to mobile communications providers. The frequencies are near those used by altitude-sensing radar altimeters. Aviation interests have said that creates a chance of interference that could leave some landings unsafe.

The wireless industry said power levels are low enough to preclude interference, and the gap between frequencies is sufficiently large to ensure safety.

Earlier AT&T and Verizon agreed to reduce power of their 5G signals and to put in place a 30-day delay, moving the service’s start from December to January 5.

FAA and DOT officials are reviewing the response from the companies and “ US aviation safety standards will guide our next actions,” the FAA said in an emailed statement.

The FAA, an arm of the UN and industry groups have been raising concerns about use of the radio waves since 2015, the US aviation regulator said.

The AT&T and Verizon executives in Sunday’s letter said that if aviation interests don’t escalate their campaign against the new signals, they would commit to not deploying towers near certain airports for six months. The offer is modelled after exclusion zones at airports in France, where 5G service is working on similar frequencies and US airliners have landed.

The wireless executives said they are “committed to continue” co-operation with transportation interests “on the condition that the FAA and the aviation industry are committed to doing the same without escalating their grievances, unfounded as they are, in other venues.”

While it’s unclear how aviation groups will respond to the wireless companies’ counter-offer, some type of restriction on 5G service near runways could limit impacts and give industry groups and regulators more time to study the potential for interference.

Aviation groups have argued that power levels and frequencies approved in other nations, including France, aren’t comparable to those in the US.

The Airlines for America trade group in an emergency petition last week asked the Federal Communications Commission to delay the planned 5G deployment. The CTIA trade group that represents wireless interests told the FCC to reject the request.

“We are optimistic that by working together we can both advance the wireless economy and ensure aviation safety,” an FCC spokesperson said in an email Sunday.

The US transportation officials in their Friday letter requested a delay of “no more than two weeks.” During that time, the FAA and the aviation industry will identify airports where a buffer zone would permit flights to continue safely.

In addition to the two-week delay, the transportation officials asked the companies to hold off on the new service near “priority airports.” The service could be activated near those airports on a rolling basis through March, they proposed.

In this way, most 5G customers could use the new service, but critical runways would be protected, they said. The FAA said it is attempting to identify the airports it views as priorities and will seek to identify mitigations that will let most large commercial aircraft operate safely.

Stakes are high for both industries. The wireless industry paid $81bn in an auction for access to the frequencies in question, and AT&T and Verizon will rely on them for network upgrades to compete with T-Mobile in providing the next generation of fast mobile broadband.

Airlines in a December 30 petition seeking a delay said they could lose more than $1bn if they can’t properly operate their aircraft due to interference concerns, while disrupting plans for millions of passengers.

Airline officials say the new wireless signals threaten to interfere with equipment on planes, a concern the wireless industry maintains is unfounded
News
1 month ago

MTN snaps up 5G licence in Nigeria for R4.4bn