More than 500 dwellings were engulfed in flames forcing the evacuation of entire drought-stricken towns, while local officials warn there could be casualties 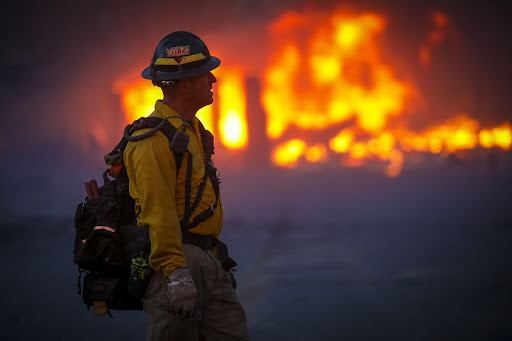 More than 500 dwellings were engulfed in flames on Thursday, Boulder county sheriff Joe Pelle reported at a news briefing, warning there could be casualties. Flames also gutted a large hotel.

Colorado governor Jared Polis, who lives in Boulder, declared a state of emergency as thousands abandoned the communities of Superior and Louisville, jamming roads and highways. Residents in other parts of Boulder County were warned they too may need to leave.

“We saw a line of flames at least a mile long,” Carmen Porter, who evacuated her home in Boulder County near Louisville, said by telephone. “Houses in the subdivision to the south, across the road from us, burnt for sure.”

After nightfall, the high winds had subsided but skies were orange in flame and the blistering heat was detected by a weather satellite 22,000 miles above the planet, the National Weather Service office in Boulder said on Twitter.

Wind gusts roaring in from the Rocky Mountains reached as high as 177km an hour, prompting the weather service to issue an alert on Twitter saying “If you are in Louisville, this is a life-threatening situation. Leave Now!”

“We are literally watching it burn,” said superior mayor Clint Folsom, quoted by the Denver Post. “This is devastating for our people.”

The primary blaze, the Marshall fire, had burnt about 1,600 acres as of 5pm, the Denver Gazette reported. Almost 40,000 homes and businesses were without power, according to Poweroutage.us, which tracks utility outages. On Twitter, the governor asked the public to “stay clear of the areas with fires and let our firefighters and first responders do their work.”

Disaster services opened evacuation centres across Boulder County. A special site to shelter horses and other large animals at the Boulder County fairgrounds filled up and a second site for animals was opened in neighbouring Jefferson County.

Patients at Centura-Avista Adventist Hospital in Superior were “safely evacuated” to other facilities, hospital operator Centura said in a statement.

Away from the fires, the winds flipped large trucks in the Denver suburb of Arvada on Thursday.