Jury found her guilty of five of the charges against her, including sex-trafficking of a minor, which carries a possible prison sentence of up to 40 years 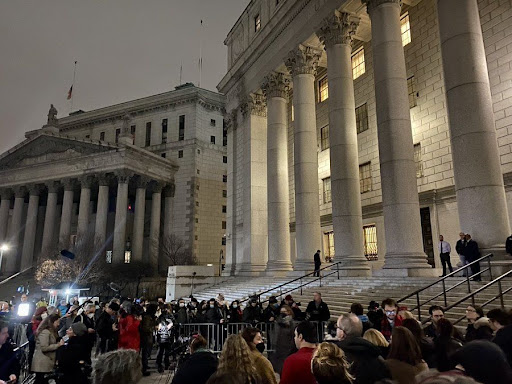 Ghislaine Maxwell was found guilty of engaging in a 10-year sex-trafficking scheme with Jeffrey Epstein, a verdict that offers long-delayed justice for his victims. Picture: BLOOMBERG

Ghislaine Maxwell was found guilty of engaging in a 10-year sex-trafficking scheme with Jeffrey Epstein, a verdict that offers long-delayed justice for his victims.

The British socialite was convicted Wednesday in a Manhattan federal court after the jurors deliberated for about five days. They found her guilty of five of the charges against her, including sex-trafficking of a minor, which carries a possible prison sentence of up to 40 years.

Maxwell, 60, didn’t appear to have any reaction to the verdict, at one point brushing her hair aside and taking a drink of water. Before, while waiting for the jury to return to the courtroom, she looked down with her hands clasped, as if praying.

“The road to justice has been far too long,” Manhattan US Attorney Damian Williams, whose office prosecuted the case, said in a statement. “But, today, justice has been done. I want to commend the bravery of the girls — now grown women — who stepped out of the shadows and into the courtroom. Their courage and willingness to face their abuser made this case, and today’s result, possible.”

“We firmly believe in Ghislaine’s innocence,” Sternheim said. “Obviously we are very disappointed with the verdict. We have already started working on the appeal and we are confident she will be vindicated.”

Maxwell’s siblings, who have attended the trial regularly, didn’t comment as they left the courthouse.

She faces as long as 65 years in prison if she’s sentenced consecutively on all five counts. No sentencing date was set for Maxwell, who still faces a separate trial on perjury charges.

The high-profile case reaches back decades and intersects with some of the biggest names on Wall Street and in high society. Maxwell herself is the daughter of a disgraced publishing baron.

Prosecutors said Maxwell was an integral part of Epstein’s crimes. Her lawyers argued that she was being used as a “scapegoat” for the crimes of Epstein, her former boyfriend and employer, who died in federal custody while awaiting his own sex-trafficking trial.

“She’s being tried here for being with Jeffrey Epstein,” defence lawyer Laura Menninger said in closing arguments. “Maybe that was the biggest mistake of her life, but it was not a crime.”

Ties to Epstein led to career downfalls for former Barclays CEO Jes Staley and Apollo Global Management co-founder Leon Black and have besmirched the reputations of Prince Andrew, Bill Gates, Leslie Wexner, Bill Clinton and many other prominent men. All have denied knowing about or participating in inappropriate conduct with Epstein.

Those names largely didn’t come up at the trial. Instead, the heart of the prosecution’s case were four women who testified that Maxwell enticed them into Epstein’s orbit for abuse between 1994 and 2004, when some were as young as 13. Three also said Maxwell herself participated in the abuse. They all described difficult home lives as teenagers that prosecutors said made them vulnerable to Maxwell and Epstein.

“If you believe those women, then that’s it: the defendant is guilty,” prosecutor Maurene Comey told jurors on December 20.

Annie Farmer, one of victims who took the stand, describing how Maxwell and Epstein abused her when she was 16, said in a statement that she was “relieved and grateful” after the verdict.

“She has caused hurt to many more women than the few of us who had the chance to testify in the courtroom,” Farmer said. “I hope that this verdict brings solace to all who need it and demonstrates that no-one is above the law. Even those with great power and privilege will be held accountable when they sexually abuse and exploit the young.”

Epstein’s long-rumoured interest in underage girls became the subject of a 2005 Palm Beach police investigation, but that was resolved in a much criticised 2008 deal negotiated by then-Miami US Attorney Alexander Acosta that allowed Epstein to plead to a single state charge of soliciting a minor for prostitution and serve 13 months in jail, much of it on work-release. Acosta was later forced to resign as President Donald Trump’s labour secretary over his role in the Epstein deal.

The 2019 case brought against Epstein by Manhattan federal prosecutors was meant to finally bring justice to his victims. After his death, more than a dozen women spoke to the judge in his case, saying they’d been robbed of justice for a second time.

“Jane,” one of the women who took the stand against Maxwell, said she was compelled to come forward and help federal investigators after Epstein’s death.

Virginia Giuffre, an Epstein victim who didn’t testify, took to Twitter to express her feelings about the verdict.

Sarah Ransome, another Epstein accuser who did not testify but attended parts of the trial, issued a statement calling the verdict “a major step forward in the fight for justice” and praising the four women. Their “courage is contagious,” Ransome said.

“Finally, after decades in some cases, many survivors of Maxwell’s sex trafficking now know that the public heard their testimony, and their voices can no longer be ignored or shamed,” she said.

“Honestly, I’m fighting back tears, happy tears. And that doesn’t happen very much,” Bloom said in a phone interview. “Finally in 2021, there is some justice and accountability held against one of these monsters.”

The 12-member jury began deliberations on December 20 and took two days off last week for the holiday. As Covid-19 cases surged in New York due to the omicron variant, US District Judge Alison Nathan expressed concern ill jurors could lead to a mistrial.

The verdict came hours after Nathan told jurors that, unless they reached a decision, they’d no longer have Thursday and Friday off from deliberations and might have to work on New Year’s Day. Still, one juror leaving the courtroom, who declined to give his name, said he didn’t feel pressured to reach a verdict because of the judge’s suggestion.

Prosecutors cast the Oxford-educated Maxwell as a “sophisticated predator” who often acted like a big sister, taking girls shopping or to the movies, before pushing them into sexual encounters with Epstein.

Carolyn, who testified in the case using only her first name, told jurors she was a middle-school dropout with an alcoholic mother when Giuffre told her she could make “hundreds of dollars” by going to Epstein’s Palm Beach, Florida mansion and giving him massages. Maxwell was there when she first arrived and told Giuffre “to show her what to do,” before sending both to an upstairs massage room where Epstein disrobed and a sexual encounter ensued. Carolyn was around 13 at the time.

Prosecutors pointed out that Maxwell’s presence was often a source of false comfort to her victims. Farmer said she was hesitant to accept an invitation to Epstein’s New Mexico ranch, supposedly to discuss her plans for college, because the financier had groped her during a previous trip to New York. But Farmer said she decided to go after she learned his girlfriend, Maxwell, would be there.

“I didn’t think anything would happen” with her there, Farmer said. She wound up being sexually abused by both of them, she testified.

The defence attacked the reliability of the accusers’ testimony, saying their memories had been tainted by time, in some cases substance abuse, sensational media accounts and supposed financial gain.

According to prosecutors, it was Maxwell who had economic motives. The government put on the stand former Epstein private pilot David Rodgers, who recalled that Maxwell “downsized” to a Manhattan studio apartment after the 1991 death of her father amid a massive financial scandal. Less than a decade later, she was living in a large Upper East Side town house. One of Maxwell’s accusers recalled that she bragged that “Jeffrey” had gotten her New York house for her.

A JPMorgan banker testified that Epstein transferred more than $30m to Maxwell between 1999 and 2007.

“Your common sense tells you, you don’t give someone $30m unless they are giving you exactly what you want,” prosecutor Alison Moe told jurors. “And what Epstein wanted was to touch underage girls.”

Several former Epstein employees testified about the jet-set lifestyle shared by Epstein and Maxwell, who ostensibly managed his five homes. Two pilots described shuttling them and their guests between his properties, which included a large Manhattan town house and a private Caribbean island.

Former Palm Beach house manager Juan Alessi testified about a 58-page rule book Maxwell produced specifying everything from the size of notepads placed on bedside tables to the brands of toiletries stocked in each bathroom. Maxwell also dictated that employees “see nothing, hear nothing, say nothing,” Alessi said.

But Alessi testified that he did see two underage girls at the house with Maxwell and Epstein, Giuffre and Jane. Bradley Edwards, a lawyer for a number of Epstein victims, said the girls Maxwell didn’t want seen or heard finally spoke loudly.

“Ghislaine never anticipated that the vulnerable girls she was feeding to her monster boyfriend would grow up to be the powerful and courageous women they became,” he said. “No matter how rich you are or powerful you are, if you choose to exploit and abuse, your day will come.”