The latest on coronavirus and the response to the rapid spread of its Omicron variant, from Indonesia to Germany 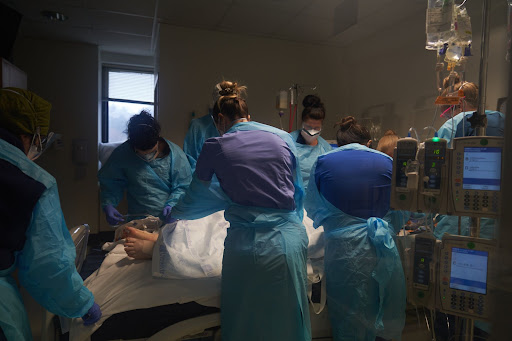 Global virus cases hit a record daily 1.44-million infections on Monday, two years after the emergence of the virus that many hoped would be fleeting by now.

Hong Kong’s government is considering making vaccinations mandatory for school and other places, according to media reports. The city may begin a trial of gradually reopening its borders with the rest of the world and significantly reduce quarantine time once overall vaccination approaches 90%, University of Hong Kong experts wrote.

The US Centers for Disease Control and Prevention cut the recommended isolation time for Americans with Covid-19 to five days from 10 days, a major change in guidelines as the Cmicron variant spreads across the nation.

Indonesian President Joko Widodo discussed a plan to ban citizens from leaving the country in a recent cabinet meeting on concern over surging Omicron cases. The government also sought the possibility of tightening health protocols, including the wearing of masks in public areas, and expediting booster jabs, vice-president Ma’ruf Amin said in a statement on Tuesday. No time frame was given for the decision.

An expert panel that advises Japan’s health ministry urged it to consider shortening quarantine for people entering Japan to three days, which would allow for a more efficient allocation of resources in the event of an outbreak. The panel also called for allowing local governments to be given more flexibility in dealing with virus cases to avoid strain on the medical system.

Australia’s daily Covid-19 case count surged past 11,200 on Tuesday, just a day after breaking the 10,000 barrier for the first time. Growing infection numbers have put pressure on the country’s testing system as well as receiving results. Pathology provider SydPath on Tuesday confirmed it had sent 486 patients a negative Test result when they had in fact tested positive, as a result of the growing caseload and human error.

Daily cases hit a record on Monday, disrupting the holiday season a year after vaccines first started rolling out. The more than 1.44-million worldwide infections smashed the prior record after factoring out a day in December 2020 when Turkey backdated a significant number of cases. A more conservative gauge — the seven-day rolling average that smooths out one-time fluctuations and holiday reporting irregularities — is also at a record level, thanks to a tidal wave of Omicron infections.

Earlier, Cable TV reported that the government is planning to expand vaccine bubble mandates to workplace and schools. Exemptions will be granted to those with medical conditions that are supported by a valid medical certificate, it said, without providing further details.

Covovax, Corbevax get the greenlight

An expert panel under India’s drug regulator recommended granting emergency use approval to Serum Institute of India’s Covovax and Biological E’s Corbevax vaccines as well as Merck’s antiviral pill molnupiravir, The Economic Times newspaper reported, citing unnamed sources. Recommendations were sent to the Drug Controller General of India, which will soon decide on their approval, the newspaper said. The new vaccines could possibly be used as booster shots in the coming days.

A Covid-19 outbreak in the western Chinese city of Xi’an continued to fester, with new cases hitting record high days after its 13-million residents were locked down in an effort to stymie the spread of the virus.

Daily infections rose to 175 in Xi’an, a jump from the roughly 150 cases seen in each of the past two days, as authorities initiated a fourth round of testing to pinpoint more infections in the community. The outbreak is being driven by the Delta variant, and has been traced back to a flight from Pakistan.

Germany recorded 21,080 new cases, compared with 13,908 the day before, according to the country’s public health authority RKI. Reported new deaths associated with the virus rose 372, bringing the total to 110,805.

Delta Air Lines service to China in the future “remains very fluid” after a flight from the US to Shanghai was turned back because of the procedures needed to clean and disinfect the aeroplane, the carrier said.

The flight returned to Seattle in order “to be compliant with cleaning mandates required at Shanghai Pudong International Airport that were issued by the Chinese government on December 21” Delta said in a statement.

The Barstool Sports Arizona Bowl has been called off, the fourth college football bowl game across the US to be cancelled over the Omicron Covid-19 outbreak.

Originally, Boise state was meant to play Central Michigan in the Arizona Bowl, while Miami was supposed to play Washington state in the Sun Bowl in El Paso, Texas. Boise state and Miami pulled out of their games because of Covid-19 cases. That left one team in each bowl game without an opponent. A deal was reached allowing Central Michigan to switch to the Sun Bowl, Barstool founder Dave Portnoy said. Financial terms were not disclosed.

In a series of tweets, Portnoy faulted the National Collegiate Athletic Association’s Covid-19 protocols, which he called “so dumb” and “meant to apply to Covid-19 12-18 months ago”.

Hong Kong may begin a trial of gradually opening its borders once the vaccination rate approaches 90%, University of Hong Kong experts wrote in an opinion piece in Ming Pao newspaper. Initial reopening may focus on business travellers whose vaccination records can be verified with antibody tests, the experts including David Lung, Ivan Hung and Yuen Kwok-yung wrote in the article.

The closures include 16 stores across New York, with Upper west Side, west 14th Street, Staten Island and Bronx locations all affected. The temporary move also affects stores in Huntington Station and Manhasset.

US agency cuts isolation to five days from 10

The US Centers for Disease Control and Prevention cut the recommended isolation restrictions for Americans who catch the coronavirus to five days from 10 days, and similarly shortened the time that close contacts need to quarantine.

Officials said the guidance is in keeping with growing evidence that people with the coronavirus are most infectious in the two days before and three days after symptoms develop.

“CDC’s updated recommendations for isolation and quarantine balance what we know about the spread of the virus and the protection provided by vaccination and booster doses,” CDC Director Rochelle Walensky said in a statement.

Delta Air Lines said that the new CDC guidance reducing the isolation time for people with Covid-19 will allow for greater flexibility in scheduling crews and employees to support holiday travel.

Goldman digs in over office plan with boosters

Goldman Sachs, one of Wall Street’s staunchest advocates of returning employees to offices, will require staffers to get tested more frequently for Covid-19 and receive vaccination booster shots as the firm stands by its workplace philosophy.

From January 10 mandatory testing will double to twice weekly, the investment bank announced in an internal memo on Monday. And by February 1, anyone entering offices must have received a booster shot, if they are eligible to get the injections by that date, the bank said. A company spokesperson declined to comment on the new measures.

France will make working from home compulsory three days a week to contain the spread of the highly transmissible Omicron variant.

Workers that have the option to stay away from the office must do so for at least three days and if possible four days to help reduce social contacts, Prime Minister Jean Castex said on Monday. He announced the measures — which are due to enter into force on January 3 for three weeks — after a special cabinet meeting convened by President Emmanuel Macron amid skyrocketing coronavirus infections in the country.

President Joe Biden acknowledged that Covid-19 Test availability has not kept up with heavy demand, saying his administration is seeking to expand pop-up sites and the availability of at-home test kits.

“Seeing how tough it was for some folks to get a test this weekend shows that we have more work to do and we’re doing it,” Biden said on Monday from the White House in a conference call with governors.

He said the Federal Emergency Management Agency has already set up some temporary testing sites, including in New York City, and that more are coming. He said there are not enough at-home tests and that his administration will continue to use the wartime Defense Production Act to produce “as many tests as possible”.

England holds back on new restrictions

Prime Minister Boris Johnson is not expected to announce further restrictions to control Omicron in England after being briefed on the effect of Christmas on infections and hospital pressures, according to the Press Association.

The UK reported more than 122,000 new virus cases on Christmas Eve, the last day that government data is available.

With Omicron widespread in the US and worldwide, travellers from these nations won’t have a significant impact on the American case count
World
4 weeks ago

Coronavirus infections have soared wherever the highly infectious Omicron variant has spread, triggering new restrictions in many countries and ...
World
4 weeks ago
Next Article