Junta chief Min Aung Hlaing said depending on state stability and peace, it plans to hold a multiparty general election in August 2023 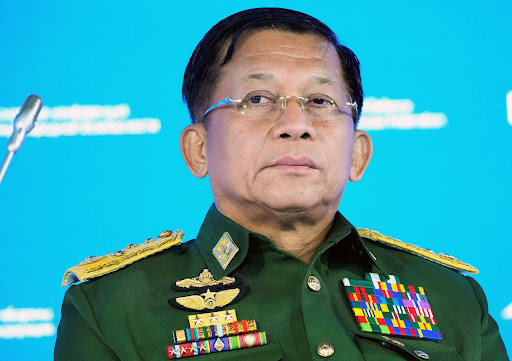 “Depending on state stability and peace, we are making our utmost effort to hold a multiparty general election in August 2023,” the junta chief said at a meeting with heads and teachers at military universities in Yangon.

The top general earlier extended the initial timeline for the new election after the election body annulled last year’s poll results that Aung San Suu Kyi’s party won in a landslide. He also pledged to hold a free and fair election after lifting the state of emergency by August 2023.

Min Aung Hlaing urged the people of Myanmar to co-operate in the process of issuing national registration cards to those eligible to ensure citizens’ right to vote. Only 25% of the process has been completed so far, he said. It’s still unclear if Rohingya minorities in Rakhine State will be allowed to vote in the fresh election.

The general said the regime had tried to talk to political parties several times but some of them didn’t come to meetings with junta-appointed election officials. Plans are under way to take actions against those who didn’t act in accordance with the laws, he added.

Since the military toppled the civilian government in February on allegations of voter fraud, junta troops have killed at least 1,365 people while more than 11,100 others have been arrested so far, according to rights group Assistance Association for Political Prisoners.

Myanmar court defers the latest verdicts in the trial of ousted leader Aung San Suu Kyi to December 27, according to a source familiar with the ...
World
1 month ago

Hundreds of people including many children have fled a flare-up in fighting between the Myanmar army and an ethnic minority insurgent group, taking ...
World
1 month ago
Next Article