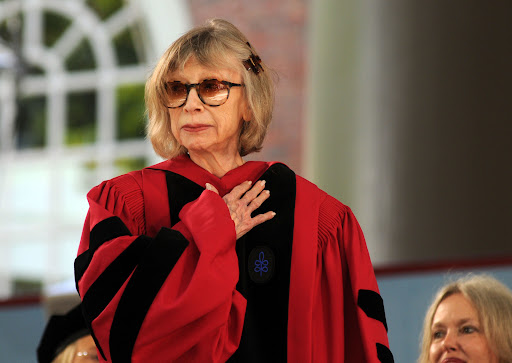 Joan Didion, the American writer whose memoir “The Year of Magical Thinking” won the National Book Award for Nonfiction in 2005, has died. She was 87. Picture: BLOOMBERG

Joan Didion, the American writer whose memoir “The Year of Magical Thinking” won the National Book Award for Nonfiction in 2005, has died. She was 87.

Didion’s publisher, Penguin Random House, said that she had died from complications from Parkinson’s disease, the Associated Press reported.

Didion’s career as a journalist, novelist, playwright and screenwriter spanned six decades. Her most famous work, “The Year of Magical Thinking,” was written in response to the death of her husband, John Gregory Dunne, and the illness of her daughter, Quintana, who died in the year of the book’s release. Didion said the process of writing was a therapeutic way of dealing with her grief. The book was adapted for the stage and was performed on Broadway, starring Vanessa Redgrave. A book of previously uncollected essays written between 1968 and 2000, “Let Me Tell You What I Mean,” was published in January 2021.

Influenced by writer Henry James, Didion focused on the architecture of every line, drawing a metaphor between writing and photographic artistry.

Didion, who started out as a feature editor at Vogue magazine, published her first novel, “Run, River,” in 1963. “Slouching Towards Bethlehem” followed in 1968, a compilation of articles about life in California with her husband, who was the brother of crime writer Dominic Dunne. Didion and her husband’s most well-known project together was the screenplay about journalist Jessica Savitch, which became the basis of the 1996 film “Up Close & Personal,” starring Michelle Pfeiffer and Robert Redford.

“Slouching Towards Bethlehem” established Didion as an exemplar of New Journalism, a school of writing promoted by Tom Wolfe. It brought storytelling technique and the first-person narrative to traditional reportage.

“Joan Didion made us see the value of inserting oneself into the story you are telling, showing us that it is often the subjective experience of the writer that is the true story,” the New York Observer wrote, calling her “a profound influence on every writer who has ever worked at a New York magazine.”

Didion was born on December 5, 1934, in Sacramento, California. She was the daughter of Frank Reese Didion, an army finance officer, who moved his family often to various bases, she said in her 2003 memoir, “Where I Was From.” The one constant in her childhood was a love of reading, which her mother, Eduene Didion, encouraged by allowing her access to the library’s adult section.

Didion earned a degree in English from the University of California at Berkeley in 1956, and won an essay contest at Vogue magazine, which launched her journalism career.

Her eclecticism and interest in political affairs were showcased in “Salvador,” a 1983 essay about a trip to Latin America, “Democracy” a 1984 romance novel set during the Cold War and the Vietnam conflict, and “Miami” (1987) about Cuban expatriates. In 2011, she released “Blue Nights,” in which she offered her own unique take on the subject of ageing.

Didion received the Medal for Distinguished Contribution to American Letters from the National Book Foundation in 2007. She also won the Evelyn F. Burkey Award from the Writers Guild of America and received the National Medal of Arts and Humanities in 2013.