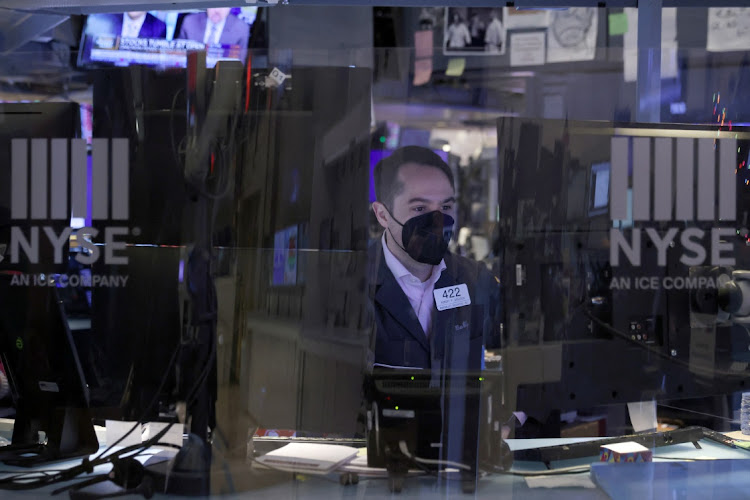 A trader in a face mask works on the trading floor at the New York Stock Exchange as the Omicron coronavirus variant continues to spread in Manhattan, New York City, US, in this December 20 2021 File photo: REUTERS/ANDREW KELLY

Anyone gearing up for bond yields to surge in 2022 should think again. A global glut of saved cash has the potential to restrain an increase in rates, even as central banks dial back their pandemic stimulus.

The strength of demand for bonds even in the face of deeply negative real returns underpins the broad consensus that 2% may act as a ceiling for US 10-year yields in the coming year. Hedge funds have built up the biggest short positions in 11 months with rates expected to climb in 2022 thanks to both inflation and expectations that the Federal Reserve will respond. But strategists expect the advance to be gradual and top out in negative territory on an inflation-adjusted basis.

Fed chair Jerome Powell highlighted the role of deep-pocketed foreign investors in repressing longer-dated yields just after this month’s final policy meeting for 2021. The way that dynamic is expected to keep anchoring yields helps explain why US policymakers mostly seem relaxed about flattening yield curves, rather than fretting over whether they signal that aggressive rate hikes could kill off economic growth.

“Deep pools of savings in Europe, Japan and north Asia broadly are going to continue to underpin demand for bonds, hence the persistence of negative and ultra-low yields,” said Martin Whetton, head of fixed-income and foreign-exchange strategy at Commonwealth Bank of Australia, the nation’s largest lender.

“These investors will always be attracted to positive yields, be they outright or FX hedged, and so we expect 10-year Treasuries will find demand around the 2% mark,” Whetton said.

The global savings glut is set to come roaring back as a major driver in bond markets, offsetting a retreat from the Fed and other central banks as they end bond buying and start hiking rates in an attempt to cool off the strongest inflation readings in decades. While that may be bad news for bond bears, it could offer a sunnier path for equities and other risk assets by signalling that low longer-term yields don’t necessarily translate to a downbeat economic outlook. 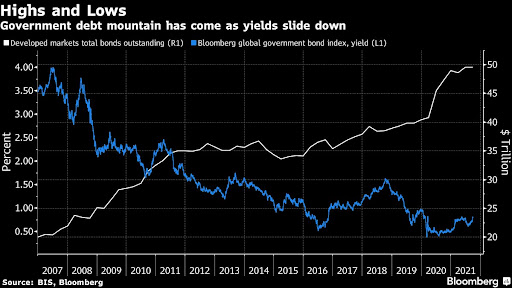 A global glut of saved cash could restrain a rates increase, despite central banks dialling back their pandemic stimulus. Graphic: BLOOMBERG

Leveraged funds held 1.8-million more futures positions betting on declines than on gains for Treasuries across the curve as of December 14, the biggest net short since January, according to Commitments of Traders data from the Commodity Futures Trading Commission. That adds to the potential for sudden rallies in bonds, after Omicron concerns caused yields to tumble amid reports hedge funds were hit with losses on bearish bets.

The weighted average forecast in a Bloomberg survey of strategists is for Treasury 10-year yields to rise a bit more than 60 basis points to just above 2% by end-2022. Yields on German 10-year bunds are seen climbing about 50 basis points to 0.08%, and similar-maturity Japanese bonds are projected to edge less than 10 basis points higher to 0.13%. Inflation in Japan and Germany is expected to be much slower than what is forecast for the US next year.

“The more challenging inflation picture in the EU and Japan, compared with North America and the UK, is delivering an ECB and BOJ that are at one end of the spectrum,” said Su-Lin Ong, senior economist at Royal Bank of Canada in Sydney. She and her colleagues expect 10-year Treasuries to yield 2.1% at end-2022.

“This may help temper the move higher in global yields that we expect in 2022 and see the EU outperform the likes of the US in the bond space, but it is unlikely to change the overall trajectory of yields given the Fed’s very clear actions and signalling,” Ong said.

Markets may be set up for a mirror image of 2019, when some investors pushed back at the recessionary warnings that were flashing from the bond market as the Fed cut rates. This time, it is the planned rate hikes that are being accompanied by the sort of curve flattening often taken as a sign that risks are growing that the Fed will hit the brakes too hard.

Global demand for government debt, especially Treasuries, also reflects how years of bond purchases by central banks in Europe and Japan alongside other “price insensitive” buyers, including pension funds and insurance funds, has reduced the so-called free float — or the amount of debt available to the trading public — in many sovereign bond markets. Deutsche Bank recently noted that across the leading six developed economies, “the aggregate free float has fallen from around 50-55% in the years before and just after the GFC to around 40%”.

Germany’s bund market stands out with a free float of less than 10%, Japan’s share is less than 30%, while the US remains above 50% and “a little higher than the GFC days”, according to Deutsche Bank. Powell’s concerns about the impact of other major markets highlight the potential that even a US market that on the surface is freer than most may struggle to see yields move sustainably higher.

“From a pure market supply point of view, bunds are unique,” said Sachin Gupta, global portfolio manager at Pimco. “The pricing of bunds is driven by scarcity and abundance of cash, that comes in part from QE.” Though “asset liability managers tend to own risk-free assets in their own currency,” Gupta said the need for a risk-free asset spills over into demand “for other assets including US Treasuries”.

The upshot is that even as QE winds down, a lot of the bonds across the world’s main markets will remain locked up for the foreseeable future. The four biggest central banks — those of the US, Europe, Japan and the UK — each own more than 30% of their economies’ bond markets.

Those bond markets face sustained passive demand not only from pension funds but also banks forced to hold government securities to meet regulatory safeguards boosted after the 2008 global financial crisis. There is also a role played by foreign central banks, with the dollar, euro, yen and pound all widely held as currency reserves. Those reserves — of which some, though not all, will be held as government securities — are equal to 7%-28% of the four respective bond markets.

Still, there is also the potential that inflation will stay strong enough to roil markets and send yields higher despite the savings glut. Investors will get a chance to assess inflationary pressures when the November US core personal consumption expenditure index, the Fed’s preferred inflation barometer, is released on Thursday. The consensus remains that yields will move higher even as Europe and Japan act to restrain their advance.

“The risk side is to the higher side for yields,” said Stephen Miller, an investment consultant at GSFM, an arm of Canada’s CI Financial.

“Markets are giving Powell a tick for now on containing inflation. If we get another month or two of inflation prints above consensus then that judgment will be withdrawn,” Miller said.