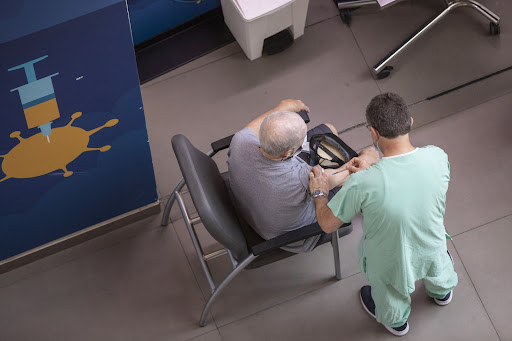 Israel will become the world’s first nation widely to administer a fourth dose of a coronavirus vaccine to people older than 60 years and medical personnel. Picture: BLOOMBERG

Israel will administer a fourth dose of coronavirus vaccine to people over the age of 60 and medical personnel, becoming the world’s first nation to do so on such a widespread basis as the Omicron variant barrels across the world.

“The citizens of Israel were the first to get the third vaccine and we are continuing to lead with the fourth vaccine,” Prime Minister Naftali Bennett said in a statement late on Tuesday.

He has ordered authorities to prepare for a nationwide inoculation drive.

Israel’s handling of the coronavirus has been studied by other countries, because of aggressive steps it took to contain the virus at the outset, its botched reopening after the first lockdown, and its early administration of vaccines and boosters. It launched the world’s leading vaccine drive a little less than a year ago when inoculations first became available, and in August, became the first country to offer boosters to much of its population after the Delta variant sent infections soaring.

As Israel’s caseload shrank dramatically within weeks and researchers rolled out data on vaccine efficacy, other countries followed suit with aggressive booster campaigns.

While Omicron has been a dominant strain in countries including the US, SA and England, Israel has been less hard hit, partly because it clamped down fast with travel restrictions. The nation of 9.3-million people had 341 confirmed cases, including 95 unvaccinated people, and 807 suspected cases, according to a health ministry statement on Tuesday.

Shortly after the variant was detected in Southern Africa last month, Israel cancelled plans to reopen incoming tourism, and banned its citizens from travelling to most of Africa. As the highly infectious strain went on a global rampage, officials widened that ban to include large parts of Europe, the US and Canada.

All residents entering the country are tested for Covid-19 upon arrival, with a mandatory quarantine period of at least three days.

In September, Israel was already making preparations to ensure it has sufficient vaccine supply in case a fourth round of shots was needed. The fourth jab will be given to people who received the third shot at least four months previously, according to a decision by health officials. Authorities also decided to shorten the time period between second and third doses to three months from five.

Health officials say they are as effective at picking up Omicron as Delta, the previous most infectious strain
News
7 months ago
Next Article