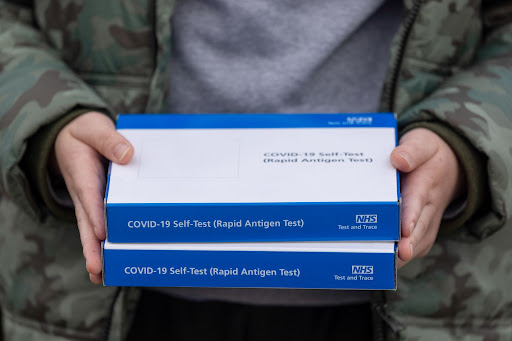 The emergence of the Omicron variant is spurring a scramble for Covid-19 lateral flow tests, to try to ensure safe holiday parties and family gatherings. The UK is dealing with a supply crunch for these cheaper, quicker tests  — known as rapid tests in the US — after health officials said last week they are as effective at picking up Omicron as Delta, the previous most infectious strain.

In the US, President Joe Biden said he will order the delivery of 500-million free Covid-19 tests to people’s homes starting in January and dispatch the military to shore up overwhelmed hospitals as the US confronts a resurgent pandemic. New York is already handing out rapid test kits, while Vermont issued a mandate that helps people cover testing costs through their insurers in a move that could soon become a federal requirement.

When should you get tested after potential exposure to Covid-19?

The best time to test is two or three days after exposure to someone who has the virus, according to Irene Petersen, a professor of epidemiology at University College London. That’s because it varies when people start to become infectious. If you sat next to someone who had the virus on Friday, then you should get a test on Monday.

I’m going to a Christmas party. When should I get tested?

Right before you leave your house, Petersen said. Don’t trust a two-day old negative test, “you might have become infectious in between”.

Can I trust a negative lateral flow result?

Don’t rely on one test taken a few days after exposure, Petersen said. You should continue to get tested up to about a week after exposure to the virus.

So you tested positive. Now what?

It is best to trust the rapid test first of all.

The official line in the UK is after a positive rapid test you should do a PCR test and self-isolate until you get your result confirmed. If a PCR within two days of a rapid test is positive, then you should start isolating for 10 days. If you take a PCR later than that, no matter the result you’ll still have to isolate for the full 10 days.

Petersen advises people to stay at home straight away after a positive rapid test, especially if they start having symptoms. “If you have a fever or a runny nose, and a positive lateral flow test, it is infectious,” she said.

What’s the difference between rapid tests and PCRs?

A lateral flow test investigates whether you have proteins from the virus in your body.  You’re most likely to have a high level of these proteins when you’re most infectious — so it may be less accurate just after infection or towards the end of your illness. It’s also known as a rapid test because it can be taken at home and gives you the results in as little as 15 minutes.

A PCR test, which identifies the genetic material from the virus, has to be checked and interpreted by a laboratory. It can take up to two days to get your results, and they’re also more expensive than lateral flows. PCRs are more sensitive at picking up the virus, because the genetic material you might have in your samples is amplified in the lab. That means it can pick up the illness earlier than the rapid test. A PCR can detect the virus as early as day two and up to 16 days after infection, according to the Robert Koch Institute.

With a PCR you may test positive even if you’re not infectious anymore, as you could still have some genetic material from the virus, Petersen said.

How do you get your hands on a lateral flow test?

In England, you can pick-up rapid tests from a pharmacy, order a kit from the list of providers found on the government website or you can go to a test site. Schools, colleges and nurseries and some employers and universities also provide rapid tests free of charge.

Get people vaccinated quickly, and roll out those booster shots
Opinion
4 months ago

Much has been learnt about the latest coronavirus variant, but a lot remains to be discovered
News
5 months ago
Next Article