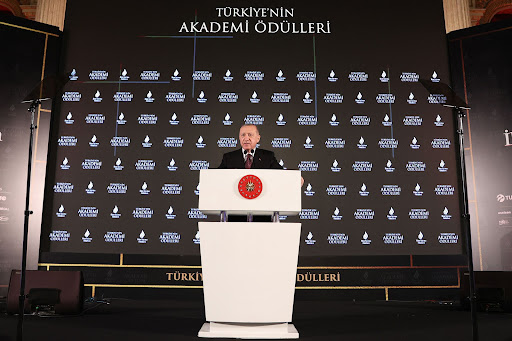 Turkish President Recep Tayyip Erdogan pledged to continue interest-rate cuts that have made the lira the world’s worst-performing currency over the past three months, referring to Islamic proscriptions on usury as a basis for his new policy push.

“What is it? We are lowering interest rates. Don’t expect anything else from me,” Erdogan said on Sunday in televised comments from Istanbul. “As a Muslim, I’ll continue to do what is required by nas,” Erdogan said, using an Arabic word used in Turkish to refer to Islamic teachings.

The lira dropped as much as 2.6% to 16.8436 per dollar in early Asian trading on Monday, heading for a fifth day of declines. The currency, which has tumbled 48% over the past three months, reached a record low of 17.1452 on Friday.

Erdogan’s comments on Sunday were the second time in a month he has invoked religion to justify the current monetary stance, which is in line with his demands for lower borrowing costs to boost economic growth. The lira’s collapse is the outcome of an economic siege, but Turkey won’t back down from its new economic policy, he said.

Turkey’s currency had slumped last month after Erdogan unveiled an economic model that relies on lower borrowing costs and a cheaper currency.

The Turkish lira has weakened to a new low after new comments from President Recep Tayyip Erdogan.

In the eyes of the president, Turkey can free itself from reliance on foreign capital flows by abandoning policies that prioritised higher interest rates and strong inflows. At the heart of his ideas is a belief that lower interest rates will also curb consumer price growth — the exact opposite of the consensus view among the world’s central bankers.

He’s put that idea to the test since September when the central bank began cutting interest rates in the face of soaring consumer prices. The ensuing monetary stance eventually left the lira unanchored, with the currency sinking to fresh record lows almost every day.

The currency’s collapse fed into consumer prices almost overnight, resulting in inflation so rampant that supermarket employees were barely able to keep up with changing labels. Working-class Turks and pensioners began forming long lines in front of municipality stalls to get subsidised bread in recent weeks while the country’s top business associations started publicly attacking the government for destabilising the economy.

“Of course, we know the impact from price increases on people’s daily lives. We are of course aware of the instability caused by the lira’s fluctuations and its impact on prices,” Erdogan said. “But we will put up resistance against these. I announce from here: there is no backing down.”

Key business group Tusiad — once the umbrella organisation for Turkey’s most powerful businesses — called on Erdogan’s government over the weekend to abandon the current policy stance, citing recent market turmoil as proof that the experimental model is bound to fail.

Erdogan hit back at Tusiad and others critical of him, warning them that “they won’t be able to challenge the government.”

“You are working to put in power a government that you can exploit. This nation will not allow you to do that,” he said.