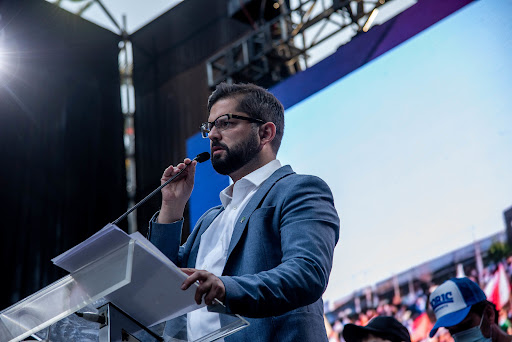 Leftist Gabriel Boric was elected president of Chile on Sunday by a larger-than-expected margin, giving him a mandate to push for higher taxes, greener industries and greater equality after a contest focused on discontent over an investor-friendly economy that has left many behind.

The former student protest leader won 56% of the vote, beating conservative rival Jose Antonio Kast’s 44%. The victory is likely to spook markets that fear interventionist policies. Boric, 35, will take office in March as one of the youngest presidents in the world and with an ambitious agenda.

His win in a runoff paves the way not only for a generational shift but also for the biggest economic changes in decades for one of Latin America’s richest countries, a global financial market favourite. It was a highly polarised campaign that only moderated in the final stretch as both contenders wooed centrists. He will face enormous challenges including a divided congress, sharp economic slowdown, the writing of a new constitution and the lingering threat of social unrest.

“We cannot continue to allow the poor to pay for the inequalities of Chile,” Boric told thousands of cheering supporters in a fiery victory speech which also acknowledged all he needs to do to build alliances. “We will reach out and build bridges so our citizens can live a better life.”

He repeated something he told President Sebastian Pinera in a conversation between them broadcast after results were announced: “The agreements need to be among all Chileans and not made behind closed doors.”

They will meet on Monday to begin the transition. Kast quickly conceded and spoke to Boric on Sunday evening.

Streets across the nation of 19-million were filled with honking cars and waving banners in celebration of the changing of the guard. Turnout was about 56% of registered voters, nearly 10 percentage points higher than the first round last month.

But Boric’s early focus on outreach has an undeniable logic. As he seeks a set of radical shifts, he needs to build a coalition with centrists and hard leftists who have clashed for decades.

“He will face a divided parliament, so passage of legislation will be difficult and will require strong negotiating skills and pragmatism,” noted Jennifer Pribble, professor of political science at the University of Richmond.

Boric describes himself as a moderate socialist who shuns the hard left models of Cuba and Venezuela. Still, Kast and his supporters warned of Boric’s alliance with the communist party as a risk.

“This is the worst scenario that the markets could have envisioned,” said Klaus Kaempfe, portfolio solutions director at Credicorp Capital in Santiago. “They were waiting for a much tighter vote showing a desire for dialogue.”

In a research note, Credicorp said the peso could fall about 4% on Monday to between 875 and 885 per dollar while stocks could sink 10%.

Boric’s supporters saw Kast as a dangerous throwback to the right-wing dictatorship of General Augusto Pinochet due to an emphasis on public order and conservative social mores.

Boric, who is unmarried, bearded and tattooed, first gained prominence a decade ago when he led nationwide demonstrations calling for free and high-quality education. He ran successfully for lower house deputy in 2013 and was re-elected to a second term in a landslide vote.

His emphasis on social justice dovetailed with a period of unrest that exploded over a transit fare hike in 2019 and quickly ballooned into a broader movement demanding better healthcare, public transport and pensions. During the campaign, Boric often vowed that, “if Chile was the birthplace of neoliberalism, it will also be its grave.”

Boric wants to dismantle some pillars of Chile’s economy such as its private pension funds, which form the bedrock of the local capital markets. He backs higher taxes on both the rich and the nation’s crucial mining industry — Chile is the world’s biggest copper producer — while also promising to keep government debt incheck.

In March, Boric will take the helm of a nation that’s facing unprecedented political upheaval. Social unrest kicked off the process of drafting a new constitution, now being done by a left-leaning assembly, which will be put to a national referendum in 2022.

He’ll have to contend with economic growth that will come to a halt, slowing from a record high near 12% this year to a rate closer to 2%, according to the central bank. Policymakers are also raising interest rates quickly to tame soaring inflation and, while Chile still has relatively sound fiscal accounts, the debt-to-GDP ratio has increased quickly amid pandemic spending.

Chilean companies and individuals have moved money abroad at a historic clip over the past few years, weighing on the currency.

Regionally, Chile’s election follows the triumph of Pedro Castillo in Peru earlier this year, and stands to add momentum to leftist candidates in Colombia and Brazil, which will hold presidential elections next year. Similarly to Chile, both of those countries are facing increasingly polarised politics.

Former law student was runner-up in a first-round vote on Sunday, behind ultraright rival Jose Antonio Kast
World
8 months ago
Next Article