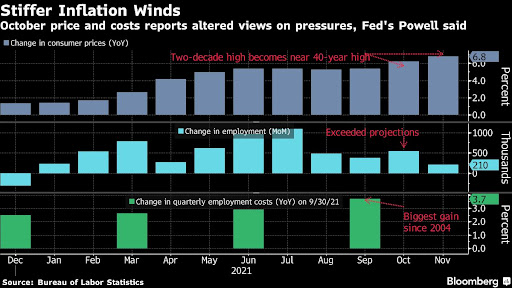 “It’s really about getting our monetary policy stance in a good position, and also — obviously — creating the optionality, at some point next year, likely, to actually start raising the federal funds target range,” Williams said on Friday in an interview on CNBC.

“Actually raising interest rates would be a sign of a positive development in terms of where we are in the economic cycle,” he said.

Fed chair Jerome Powell and his colleagues decided on Wednesday to double the pace at which they are winding down their bond-buying programme, putting them on track to wrap it up by mid-March, and signalled they expect three increases in their benchmark federal funds rate will probably be appropriate in 2022.

The move, which analysts described as the most hawkish pivot by the central bank in years, came in response to fast-rising inflation. Fed officials still say they believe inflationary pressures are largely tied to the pandemic and that they expect inflation to come down next year, but they are positioning for a tighter policy stance in case it does not.

“I’m pretty optimistic that we are seeing really strong improvements in the labour market. You’ve seen the unemployment rate come down quickly,” Williams said. “I — like, apparently, my colleagues, based on our economic projections — expect the unemployment rate to come down to about 3.5% by the end of next year. I expect growth to be well above trend. And I do expect inflation to come down somewhat, but still be above our 2% target.”

The consumer price index rose 6.8% in the year to end-November, marking the fastest pace of increase since 1982. In recent months, surging food and energy prices and accelerating rental inflation have contributed more to overall inflation than earlier in the year, when outsize price increases were concentrated largely in the used-car market and a reopening leisure and hospitality sector.

“I am very focused on real interest rates, which means not just looking at what the nominal federal funds rate is, but actually adjusted for expected inflation,” Williams said.

“With expected inflation a little higher in our projections now, especially for next year, clearly that’s a factor,” he said. “We want to make sure that we’re adjusting policy and somewhat removing accommodation going forward.”

Gold on track for best week in five

Borrowing costs up 15 basis points to 0.25% despite the threat to the UK economy posed by record coronavirus cases
News
5 months ago
Next Article

HILARY JOFFE: Let’s hope Omicron doesn’t do as much damage as other variants ...

HILARY JOFFE: Let’s hope Omicron doesn’t do as much damage as other variants ...