Borrowing costs up 15 basis points to 0.25% despite the threat to the UK economy posed by record coronavirus cases The Bank of England (BoE) has raised interest rates for the first time since the pandemic struck, setting aside the threat to the UK economy posed by record coronavirus cases to lead the global fight against surging inflation.

Officials led by governor Andrew Bailey voted 8-1 to lift borrowing costs by 15 basis points to 0.25%, delivering an increase that no other Group of Seven (G7) central bank has made since the start of the crisis. Policymakers said more “modest” tightening is likely to be needed as inflation heads towards a peak — probably near 6% in April.

The BoE’s shift into tightening mode will surprise the large majority of economists who anticipated no change, and investors who were pricing in about a 40% chance of a move. The outcome was the second in a row featuring a surprise after November’s decision to hold steady wrong-footed financial markets.

The US Federal Reserve set a hawkish tone on the eve of the BoE announcement by signalling three rate hikes next year and accelerating the wind-down of its stimulus programme, while Norway kept up its own tightening effort on Thursday with its second increase this year. 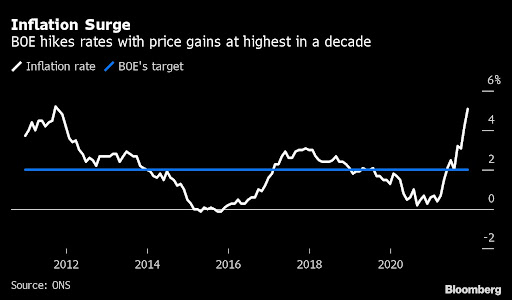 The BoE hike is a response to the danger posed by surging prices, with a report this week showing inflation jumped to 5.1% in November — more than double the central bank’s target — and a separate report on Tuesday showing UK companies added to payrolls at a record pace.

The decision to move now is all the more remarkable since the country is in the grip of a new coronavirus wave driven by the more infectious Omicron variant, which has pushed daily caseloads in the UK to the highest recorded total since the pandemic began.

The danger that poses in potentially overwhelming the country’s health services is such that Prime Minister Boris Johnson’s government has reintroduced some curbs on activity, with more possible in coming days and weeks if the outbreak can’t be quelled.

By moving now, the BoE heeded a warning this week from the IMF, which cautioned against policy inaction on inflation.

The Fed’s shift on Wednesday underscores the level of alarm felt by some global central bankers. It laid out a road map for a series of rate increases over coming years as chair Jerome Powell signalled that inflation is now enemy No 1 to keeping the US economic expansion on track.

Later on Thursday, the European Central Bank was due to explain its own plan for moving on from emergency stimulus. President Christine Lagarde has been at pains, however, to persuade investors that a rate increase in the eurozone isn’t going to happen any time soon.

Those who were caught out lost money, said two senior employees in London
World
4 months ago