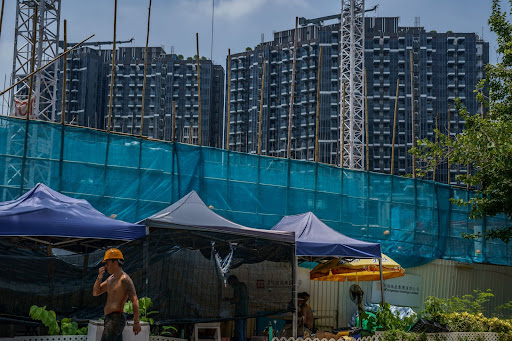 China Evergrande Group had more than 163,000 employees on June 30 and indirectly supports the livelihoods of many more through its vendors. Picture: BLOOMBERG

China Evergrande Group is prioritising payments to migrant workers and suppliers as regulators urge the cash-strapped developer to head off any risk of social unrest, say people familiar with the matter.

Authorities are particularly focused on making sure payrolls are met before the lunar new year holidays starting on February 1, when thousands of migrant construction workers are due to reunite with their families, the people said, asking not to be named discussing private conversations. Evergrande had 163,119 employees on June 30 and indirectly supports the livelihoods of many more through its vendors.

Paying workers before China’s most important holiday will be the top priority not just for Evergrande but also for scores of other struggling developers given the premium Xi Jinping’s government puts on social stability. About 52-million migrant workers earn their living in the construction sector, according to calculations based on official data. Most will join an annual ritual of family reunion that centres on the new year celebrations, making what’s often their only trip home each year.

The instructions to Evergrande underscore the government’s deep involvement in decision-making at the company, with the Communist Party’s priorities likely to supersede those of banks, bondholders and shareholders.

The People’s Bank of China and Guangdong government have said they will work to dissolve risks related to Evergrande, protect homebuyers and ensure social stability.

Officials from Guangdong, where Evergrande is based, and company executives are reaching out to other local authorities to discuss how salary payments can be made, said one of the people. Where the escrow accounts of projects have sufficient funds, the government will first release the wages of migrant workers and then clear suppliers’ bills, the people said.

In projects that aren’t fully funded, a number of options are being discussed, including using unsold apartments to cover the dues or returning the land-sale proceeds of undeveloped land to pay off suppliers and workers.

Along with workers, Beijing is prioritising the interests of about 1.5-million homebuyers waiting for delivery of their apartments.

Local governments have been authorised to take charge of Evergrande’s incomplete sites to ensure homebuyers get the apartments they paid for, the people said. Provincial officials are being asked to complete projects where funds are available, and seek out partners — other developers or state-owned enterprises — where there’s a shortfall, the people said. It’s unclear what this arrangement will mean for other creditors waiting in line.

Earlier this month the State Council urged the timely payment of workers’ salaries. “Making sure migrant workers receive salary in time and in full is a big matter for their livelihood,” the official China Central Television quoted Premier Li Keqiang as saying in a December 2 meeting. “The end of the year as well as the beginning of the next year are settlement seasons for all kinds of projects. China will severely punish those who delayed the salary payment.”

Evergrande was labelled a defaulter for the first time last week after it missed making coupon payments on two bonds. The company has said it is “actively engaging” with offshore creditors on a restructuring plan.

At the same time, company executives are a minority on the developer’s new seven-member risk committee, which includes senior managers from Guangdong state-owned enterprises and China Cinda Asset Management, the nation’s largest bad-debt manager. Another is from a law firm, while only two members are from Evergrande, including founder Hui Ka Yan.

The move may trigger cross defaults on the Chinese property developer’s $19.2bn of dollar debt
News
5 months ago
Next Article