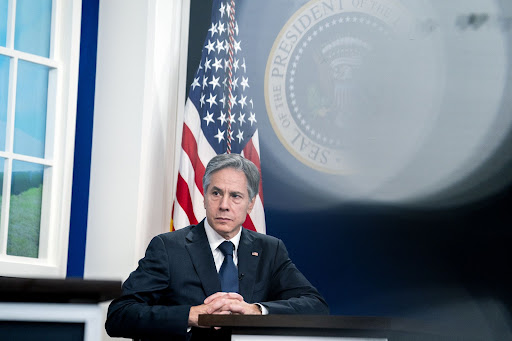 US secretary of state Antony Blinken criticised China’s “aggressive actions” in Asia while laying out plans to more closely integrate US allies and security partners in Asia.

During a key policy speech in Jakarta on Tuesday, Blinken underscored US efforts to deliver high-quality infrastructure and vaccines to the region while working closer on security issues. He said the Biden administration doesn’t want conflict in Asia, and would ensure competition with China doesn’t veer into a “catastrophic” conflict.

“We’ll adopt a strategy that more closely weaves together all our instruments of national power — diplomacy, military, intelligence — with those of our allies and partners,” Blinken said on the first stop of a three-nation tour of the region. He reeled off a list of concerns about China, including “claiming open seas their own” and hitting countries that stand up to it with trade restrictions.

“The goal of defending the rules-based order is not to keep any country down,” Blinken said. “Rather, it’s to protect the right of all countries to choose their own path, free from coercion and intimidation.”

US secretary of state Antony Blinken speaks in Jakarta about America's policy on Indo-Pacific and geopolitical issues in the region.

Blinken is seeking to rebuild relationships that frayed during President Donald Trump’s term with governments that aren’t part of the Biden administration’s Quad partnership with Australia, India and Japan. Still, Blinken had little to say on the issue of trade, where regional leaders have pushed for the US to offer something just as substantive as the 11-nation deal Trump exited in 2017.

The top US diplomat reiterated that the administration is still developing an Indo-Pacific strategy that will focus on trade, the digital economy, technology, supply chains, clean energy and other areas. He noted the Quad nations provided more than $48 billion in government-backed financing, part of efforts to counter China’s Belt and Road Initiative.

China hit back at his comments, with foreign ministry spokesperson Wang Wenbin saying a regular press briefing in Beijing that Washington should respect the ways the region maintains peace, especially through Association of Southeast Asian Nations (Asean), “instead of drawing ideological lines, putting together small cliques and inciting bloc confrontation”.

“We hope the US will truly follow through on the spirit of the summit between the two heads of state and pursue win-win results and peaceful coexistence rather than talking one thing and acting another,” he added, referring to a video conference the leaders of the two nations held last month.

“While the Indo-Pacific economic framework is better than nothing, it clearly isn’t the kind of economic engagement the region is looking for,” Greg Poling, director of the Southeast Asia Program at the Center for Strategic and International Studies in Washington, said before the speech.

During the speech, Blinken underscored the importance of the Quad, the Asean and other partnerships such as the Aukus agreement with the UK and Australia. He also condemned Myanmar’s military regime and said the US wouldn’t give up on the goal of a “peaceful solution” that represents the will of the people.

Despite the comments, Blinken faces some bruised feelings in Southeast Asia.

The administration didn’t invite Singapore — arguably America’s most reliable partner in Southeast Asia — to take part in President Joe Biden’s “democracy summit” last week. Cambodian leaders were frustrated with an arms embargo imposed by the US over its growing military ties with China. And while the US has a new ambassador in Singapore, many key envoy posts remain unfilled.

Southeast Asia has taken on added importance to the Biden administration as it seeks to build up alliances to pressure Beijing over everything from human rights to its assertiveness in the South China Sea — an area where smaller Asian nations such as Malaysia and Vietnam often find themselves at a disadvantage with China.

Beijing has rattled Indonesia in recent months with repeated incursions into its exclusive economic zone, while Chinese boats have repeatedly harassed civilian vessels in Malaysian oil and gas fields in recent years.

The speech in Jakarta was also meant to emphasise the importance the administration places on the US relationship with Indonesia, the world’s third-largest democracy and most populous Muslim-majority nation. Indonesia is also due to host the G20 in 2022 and to chair Asean in 2023, further underscoring its significance in the region.

Blinken’s visit to Indonesia will be followed by stops in Malaysia and Thailand, two other influential regional players.

But simply showing up will only take the US so far. Blinken’s audience in Jakarta and across the region will be looking for concrete actions. One bright spot for the administration is its efforts on vaccine diplomacy, which have seen it donate more than 25-million vaccine doses to Indonesia through the Covax programme and has pledged to deliver tens of millions more across the region.

The administration’s economic pitch is harder to sell. The US is unlikely to rejoin the Comprehensive and Progressive Agreement for Trans-Pacific Partnership (CPTPP) trade agreement that Trump exited because of domestic opposition. Singapore deputy prime minister Heng Swee Keat in December called for the US to increase economic engagement in Asia with an “equally substantial alternative” deal to the CPTPP.

Other potential initiatives such as a digital trade agreement for the region are still nascent and would also be likely to encounter political opposition. That’s left the Biden administration pushing an economic “framework” for the region that so far is short on details.

“The achilles heel is the lack of trade policy,” said Polling.

While a Russian invasion is unlikely, Ukraine, Europe and the US must guard against complacency
Opinion
1 month ago
Next Article