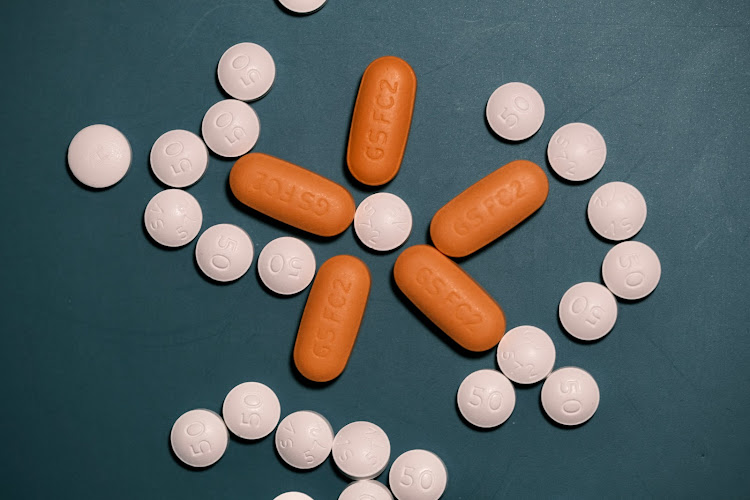 If immunosuppression by advanced HIV drives the evolution of Covid-19, antiretroviral coverage should be increased to prevent it. Picture: 123RF/SHOWTIME PHOTO

SA should boost the provision of antiretroviral drugs for millions of people infected with HIV to potentially reduce the chance of new Covid-19 variants emerging, scientists said.

In a revised study of an HIV sufferer with limited adherence to an antiretroviral therapy (ART) programme, scientists led by Alex Sigal of the Durban-based Africa Health Research Institute analysed the mutations that developed as the female subject harboured the Covid-19 virus for 216 days. HIV, advanced cancer and some other diseases, suppress immune systems, allowing other infections to take hold. ART treatment restores the body’s ability to fight off infections.

“Characterising Sars-COV-2 evolution in specific geographies may help predict the properties of variants coming from these regions,” Sigal said in the revised preprint, which was submitted earlier this week. “If immunosuppression by advanced HIV drives Sars-COV-2 evolution, ART coverage should be increased to prevent it.”

While SA has the world’s biggest ART programme, it also has 8.2-million people infected with the disease. Several of its neighbours have high HIV-prevalence rates. While most sufferers in Africa’s most industrialised nation are on treatment, several million are not. The pandemic has further disrupted the programmes.

Much has been learnt about the latest coronavirus variant, but a lot remains to be discovered
News
6 months ago

The theory that Omicron developed in an immunosuppressed person is just one hypothesis. Others include that the coronavirus crossed back into an animal, mutated and then infected a human. Another possibility is that it quietly mutated in an area with little surveillance and low access to health care and was then found in SA, where sequencing of Covid-19 samples is comparatively high.

The new variation that developed in the SA subject started off as an infection with the original virus strain, first identified in Wuhan, China.

Isolated virus cultures were taken on days six, 20 and 190 (D6, D20 and D190) after infection. The propagated sample from day 190 evaded antibodies produced from previous infections or vaccinations at a similar level to the Beta variant. The day six and day 20 samples didn’t escape antibodies.

The D190 virus had a “pronounced” ability to escape antibodies produced in response to an infection with Delta, the variant that has swept across the globe in 2021, causing severe disease and death.

“The driving force behind the evolution of D190 may have been the presence of very low levels of antibody to Sars-COV-2, which may select antibody escape mutations,” the scientists said.

About 80,000 people in SA could be susceptible to hosting Covid-19 for long periods, allowing it to mutate

The researchers cautioned that only one subject of 93 HIV-infected people in the study showed strong evolution of the coronavirus. Still, that could mean that about 80,000 people in SA could be susceptible to hosting Covid-19 for long periods, allowing it to mutate, they said.

The potential for Covid-19 to change is not specific to an infection of someone who is HIV positive, but to an infection with the coronavirus of anyone with a suppressed immune system, Sigal said.

The SA subject was largely asymptomatic throughout her infection, the scientists said.

An explanation for the lack of symptoms could be that the virus “had low pathogenicity to begin with”, they said. “The Omicron variant has emerged as this work was being revised and has mutations at many of the same sites as the evolving virus” that was the subject of the study, the scientists said.

A separate study released this week by scientists led by Sigal showed that the Covid-19 vaccine produced by Pfizer and BioNTech was less effective against Omicron than earlier variants.

If the “strain described in this work and Omicron share a common evolutionary mechanism, Omicron may have Beta-like serology, substantial but incomplete escape from neutralising immunity elicited by mRNA vaccines, and strong escape of Delta-elicited immunity, which may lead to reinfections,” the scientists said in the preprint.

“Whether other features could also be shared, such as potentially mild pathogenicity, is yet unknown.”

Omicron has caused alarm globally as it appears to be more transmissible than earlier strains. Still, as early evidence from hospitals is that it may be less pathogenic, it could cause less severe disease.

Despite signs of progress, contagion rates are still at high levels and governments are staying alert
News
6 months ago

The UN estimates SA hosts about 2.9-million workers from other Sadc countries, with the bulk coming from Mozambique, Zimbabwe and Lesotho
News
6 months ago