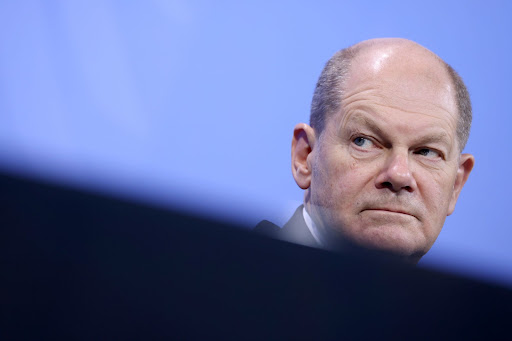 German Chancellor Olaf Scholz, who promised that his government will ‘do everything’ to ensure that natural gas continues to flow through Ukraine. Picture: BLOOMBERG

German Chancellor Olaf Scholz promised that his government will “do everything” to ensure that natural gas continues to flow through Ukraine and prevent Russia from using its Nord Stream 2 pipeline to cripple the former Soviet republic’s economy.

During a three-hour trip to Poland on Sunday, Germany’s new leader did not directly address what, if any, action his government would take against the pipeline as Russia masses troops on Ukraine’s border.

“At this point, the pipeline can’t be certified because it doesn’t fulfil the requirements of European energy law — and security issues are still on the table,” Baerbock, whose Green party is a junior partner in Scholz’s government, told broadcaster ZDF.

The uncertainty over the pipeline, as well as forecasts for cooler weather, helped push Europe’s front-month natural gas futures to their highest levels since early October on Monday, with benchmark prices rising as much as 10%.

In Warsaw, Scholz reinforced a pledge by his predecessor, Angela Merkel, that Germany would use its leverage to ensure that Russia extends its transit contract with Ukraine and help overhaul the East European country’s energy infrastructure.

“We feel responsible that the gas transit business is also a successful business,” Scholz said in Warsaw after a meeting with Polish Prime Minister Mateusz Morawiecki.

Morawiecki said the rollout of Nord Stream 2 could “tighten the noose” around Ukraine and repeated his call to stop the pipeline project. Scholz made his second trip to the Polish capital after being sworn in to succeed Merkel on Wednesday.

Scholz also said he prefers a “pragmatic” resolution to the escalating dispute between the European Commission and Warsaw over adhering to principles of the rule of law. The EU has been locked in dispute with the Polish government over its revamp of the judicial system.

Merkel leaves behind a complicated legacy
Business
6 months ago

Despite signs of progress, contagion rates are still at high levels and governments are staying alert
News
6 months ago