Hong Kong court sentenced the activist to 13 months in prison over his role in banned Tiananmen Square vigils, though it won’t extend his time behind bars 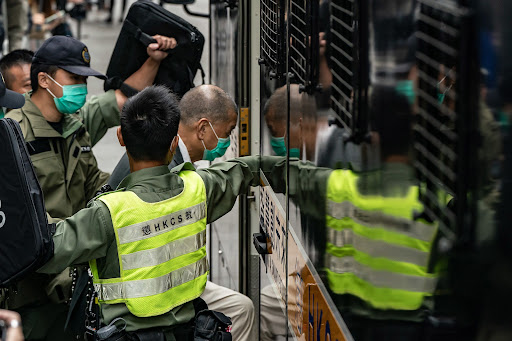 A Hong Kong court sentenced democracy activist Jimmy Lai to 13 months in prison over his role in banned Tiananmen Square vigils last year, though the sentence won’t extend his time behind bars.

Lai, who was convicted on Thursday of inciting others to join an unauthorised assembly, was already serving 20 months in jail for his participation in 2019 antigovernment protests. He also faces charges under Hong Kong’s national security law that are punishable by up to life in prison.

Veteran pro-democracy activists Chow Hang-tung, Gwyneth Ho and Lee Cheuk-yan were among a total of eight defendants sentenced on Monday over their roles in events to commemorate the June 4, 1989, crackdown in Beijing. Lee, a former lawmaker, was given a term of 14 months, to be served concurrently with a previous sentence.

Lai offered a defiant response to his conviction before the hearing on Monday, saying through his lawyer that he was willing to share the burden with those “who shed their blood on June 4 to proclaim truth, justice and goodness.” Chow denounced the convictions as “one step in the systemic erasure of history, both of the Tiananmen Massacre and Hong Kong’s own history of civic resistance.”

The former Apple Daily newspaper publisher has been a central target of the government’s campaign to punish democracy activists who have challenged Beijing’s authority in the former British colony. Earlier this year, the Next Digital media company he founded and the Apple Daily, which was known for stories on the hidden wealth of high-ranking leaders in the ruling Communist Party, closed amid government pressure.

Thousands of people defied a police ban last year to hold the vigil for victims of the Tiananmen crackdown some three decades ago, an event that once drew tens of thousands of people annually. Democracy advocates say the authorities used rules for fighting the pandemic to curb the right to assembly in the former British colony.

The media tycoon’s presence “was a deliberate act to rally support for and publicly spotlight” the June 4 event, district court judge Amanda Woodcock said in her earlier judgment. “He need not use words of incitement to intend to incite others.”

Authorities have charged 24 people for their role in the vigil last year, with Lai, Chow and Ho the only ones to plead not guilty. The other defendants, including former student activist Joshua Wong, have been handed jail terms ranging from four to 10 months. Three received suspended sentences.