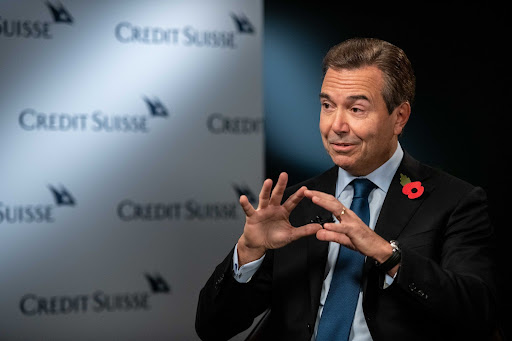 Credit Suisse Group named Francesco de Ferrari to head its global wealth business as part of a broader management shake-up, a move that sees him return to the Swiss bank after a controversial stint leading Australian wealth manager AMP.

De Ferrari will join the executive board effective January 1 and report to group CEO Thomas Gottstein, the bank said in a statement on Monday. Bloomberg had reported in November that Credit Suisse was planning to name him wealth head.

The Swiss lender also announced new regional heads as part of plans to simplify its structure, naming investment bank chief Christian Meissner to run the Americas and Swiss bank head Andre Helfenstein to oversee the domestic market. De Ferrari will take control of Europe, the Middle East and Africa on an interim basis.

The appointments come just more than a month since the Swiss wealth manager announced a revamped strategy that saw it exit its prime services business and reorganise its divisions into global units. The strategic update, a centrepiece of new chair Antonio Horta-Osorio’s attempts to win back confidence after the Archegos Capital Management and Greensill Capital crises, met with a muted reaction from investors, with some saying it was not radical enough.

In appointing De Ferrari, Credit Suisse is turning to an executive who comes with baggage of his own after a shortened tenure as CEO of AMP. He left the Australian wealth manager in June after shareholder discontent over his and the board’s handling of a takeover offer and the promotion of a manager tainted by sexual harassment allegations.

The Swiss bank delayed the announcement of his appointment as head of its unified global wealth unit in early November to run additional checks on his tenure at AMP, people familiar with the discussions have said.

De Ferrari “joins with an impressive track record and a profound knowledge of Credit Suisse and the industry, reinforcing our executive board at this critical junction in our journey”, Horta-Osorio said in the statement.

Philipp Wehle, who oversaw the international wealth unit, will become CFO of the new, global wealth business. Lydie Hudson, the former head of compliance who most recently oversaw sustainability, research and investment solutions, will leave the bank.

“Risk management will be at the core of all our actions, with the board of directors and the executive board together driving a culture that reinforces the importance of accountability and responsibility,” Horta-Osorio said.

De Ferrari oversaw a tumultuous two-year period while in charge at AMP, marked by a 60% decline in the share price, a botched deal with Ares Management and a shareholder backlash over its handling of sexual harassment claims. There was also litigation related to alleged misleading of regulators over charging customer fees for services they did not receive.

He joined AMP in 2018 with a mission to repair the scandal-plagued 172-year-old company but failed to fully put in place a turnaround strategy, with some of his changes now being reversed by the new CEO. He left AMP under a cloud as talks with Ares eroded and shareholders clamoured for the bank to spin off its investment manager, AMP Capital, to cut costs, the Australian Financial Review (AFR) reported in March.

In 2020, he also had a run-in with Credit Suisse’s largest shareholder, Harris Associates, which is also the largest shareholder of AMP. The US fund manager was upset at the board of directors and De Ferrari’s promotion of a manager to the executive board despite a sexual harassment sanction two years earlier, according to AFR.

De Ferrari forfeited an exit bonus of A$1.6m, but was refunded A$200,000 of his relocation costs from Singapore, the publication reported.

Before AMP, De Ferrari spent 16 years as a private banker at Credit Suisse, including seven years as its CEO for private banking in Asia-Pacific. When he left, the bank appointed two of his lieutenants to run the region, Benjamin Cavalli and Francois Monnet. In November, Cavalli was appointed the sole CEO of the region as Monnet plans to retire at the end of the year.

The company could raise $500m in a listing, which would reportedly consist largely of new shares
News
6 months ago