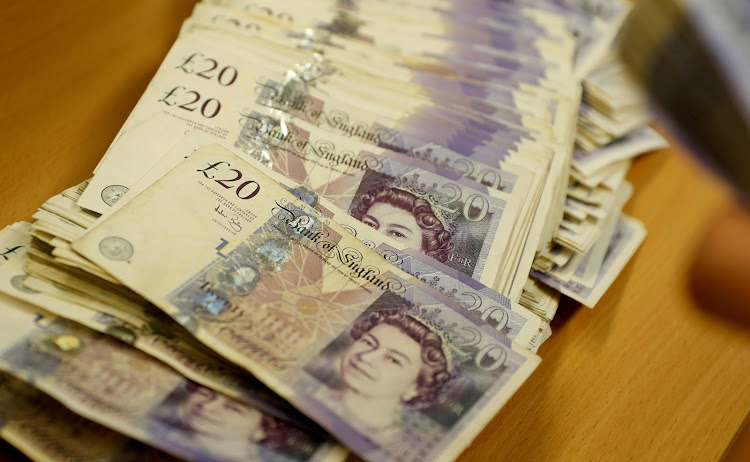 There’s trouble brewing for the pound as the UK tightens its coronavirus restrictions again.

Sterling is heading for its first yearly loss since 2018 as Prime Minister Boris Johnson advises people to work from home to help curb the spread of the Omicron variant. The measure is stoking fears about the country’s sputtering recovery and forcing traders to pare back bets on a Bank of England (BOE) rate hike on Thursday — which just weeks ago looked like a done deal.

Mizuho Bank, Mitsubishi UFJ Financial Group (MUFG) and Canadian Imperial Bank of Commerce see a deeper decline for the pound towards $1.30 or beyond in the coming weeks, while sentiment in the options market is close to the most bearish in 12 months.

Unlike their peers in other big currency markets, pound traders are having to recalibrate their expectations for central bank policy. Parts of Europe face far stricter lockdowns, yet there is little question the European Central Bank will remain dovish. And in the US hawkish expectations for the Federal Reserve continue to build, lifting the dollar.

“Until recently we had a December hike and a zero-lockdown scenario as bolted on for the UK,” said Neil Jones, head of foreign-exchange sales to financial institutions at Mizuho. He expects sterling to fall to $1.295, its weakest in 13 months. “This week has seen an abrupt 180° [turn] on the rate and Covid-19 trade as far as the pound is concerned.” 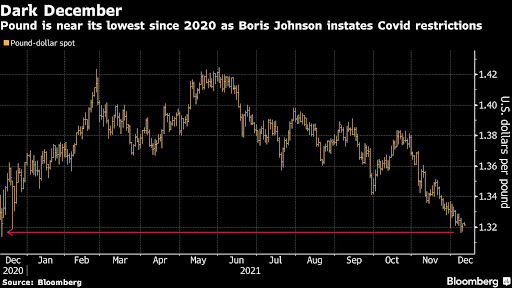 Nerves are fraying. The cost of hedging swings in the pound going into the BOE decision is at its highest in more than nine months, with money market traders betting an increase in borrowing costs will not come until February.

“Cautious comments from BOE officials and further Covid-19 restrictions mean that it’s more likely to delay raising rates until there’s more clarity on Omicron’s impact,” said Lee Hardman, a strategist at MUFG. He expects sterling to dip towards its lowest since November 2020, when fears prevailed that a Brexit deal could not be reached. “In contrast we expect the Fed to speed up tightening plans” in the week ahead.

Strategists are paring back their targets for the pound, though they may still be playing catch-up with the news cycle. They’ve slashed their forecasts by nearly 4% to $1.35 for the end of March, compared with $1.40 three months ago, according to the median forecast in a Bloomberg survey.

For Citigroup, the pound is the least preferred Group of 10 (G10) currency against the dollar with a fair value of $1.29, more than 2% weaker than current levels, according to global head of foreign exchange analysis Ebrahim Rahbari.

Not everyone is so bearish. While Barclays expects the BOE will start raising rates in February, passing on Thursday’s meeting is not going to cause “much of a disappointment for financial markets”, said Eimear Daly, an analyst at the firm.

“We think the pound is going to benefit from inflation peaking in the first half of next year,” she said. “And growth has actually been relatively resilient in the UK.”

Still, a further rethink about the BOE’s ability to tighten next year could be in store. And investors are beginning to take note of the political turmoil engulfing the prime minister after his staff were accused of breaking lockdown rules with a Christmas party last year.

“The market has priced in too many rate hikes in 2022 given the headwinds that face the economy in the form of rising food and energy prices and the national insurance tax hike,” said Jane Foley, head of foreign-exchange strategy at Rabobank. “The chaos in Downing Street is not a positive factor for sterling and could increase the reluctance of investors to buy into post-Brexit Britain.”

Doyle is the latest senior aide named in the saga over a gathering on December 18 2020, after Johnson’s former spokesperson, Allegra Stratton, quit ...
News
5 months ago

The problem with the 10 Downing Street Christmas party last year that the prime minister won’t confirm is that it leaves the impression that those ...
Opinion
5 months ago
Next Article