Despite signs of progress, contagion rates are still at high levels and governments are staying alert 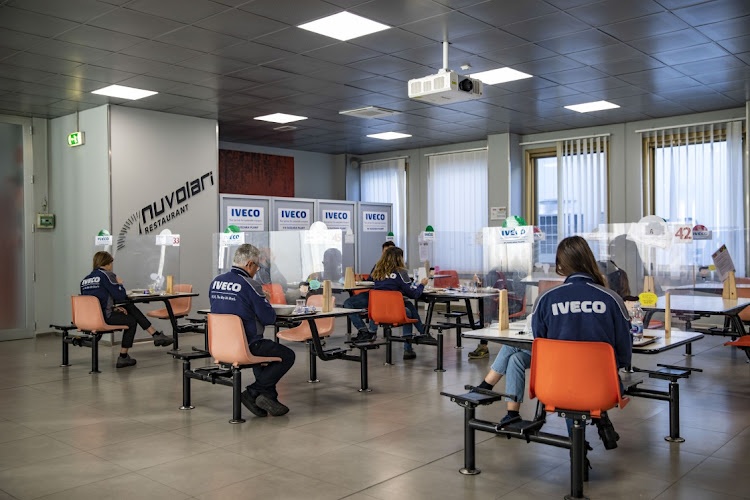 Workers at social distanced tables during their lunch break at the Iveco SpA plant in Suzzara, Italy, on Friday December 3 2021. Picture: BLOOMBERG/FRANCESCA VOLPI

Europe’s virus surge appears to be levelling off after governments across the continent clamped down with another round of tough measures, including lockdowns and restrictions on the unvaccinated.

While the trend varies across countries, overall EU numbers look to have hit a plateau. Austria and Germany have seen a dramatic shift, with the former’s seven-day case rate plunging by more than half since late last month.

Despite signs of progress, contagion rates are still at high levels and governments are staying alert given the danger of relaxing too fast and reigniting the flare-up.

The spread also appears to be slowing in the Netherlands. But cases are still rising sharply in some countries, including Switzerland, where the spread of infections is at a record high.

There’s also the big unknown of the new Omicron variant, which looks to be more transmissible than the Delta mutation. Germany and other countries are pushing hard to deliver boosters after some initial research suggested lower protection in people who received just two shots.

Hungary, with one of the worst death rates per capita worldwide, is moving past the peak of the current virus wave, Prime Minister Viktor Orban said on Friday. Romania, another former global hotspot, ended an overnight curfew and extended the opening hours of shops in response to a drop in case numbers.

Poland, however, announced tighter Covid-19 restrictions this week to prevent the pandemic from further straining the health system.

In Germany, Chancellor Olaf Scholz will meet next week with state leaders, who largely control health policy, to discuss next steps. He isn’t ruling out more restrictions before Christmas.

Germany’s goal is to administer 30-million doses of vaccine by the end of the year. The country is also pressing ahead on making inoculations compulsory, with legislation on Friday requiring the shots for care givers. A broader vaccine mandate is also planned.

Karl Lauterbach, Germany’s new health minister, said the government’s strategy is aimed at ending the ongoing Delta wave and thwarting Omicron before it spreads too far.

“The highest goal for us it to protect the population,” Lauterbach — a Harvard-educated epidemiologist — said on Friday during the parliamentary debate. “We will do everything to end this crisis quickly.”

Vaccination drives, including boosters, are a common theme across Europe, where many governments are also specifically targeting the unvaccinated with measures.

Austria is ending a three-week lockdown on Sunday but keeping restrictions on those who haven’t been inoculated. And in a controversial move, it’s also bringing in mandatory vaccinations as the continent gradually toughens its stance.

Germany’s Scholz indicated that he’ll take a hard line on anti-vaxxers after reversing course and moving to make shots compulsory.

“Because a loud minority is against vaccinations and takes radical action, we shouldn’t accuse society as a whole of division,” Scholz said on Twitter. “We have to deal with other opinions, but where people are threatened, we have to stand up.”

UK cases of the Omicron variant may possibly top 60,000 a day by Christmas, according to epidemiologist John Edmunds
World
5 months ago