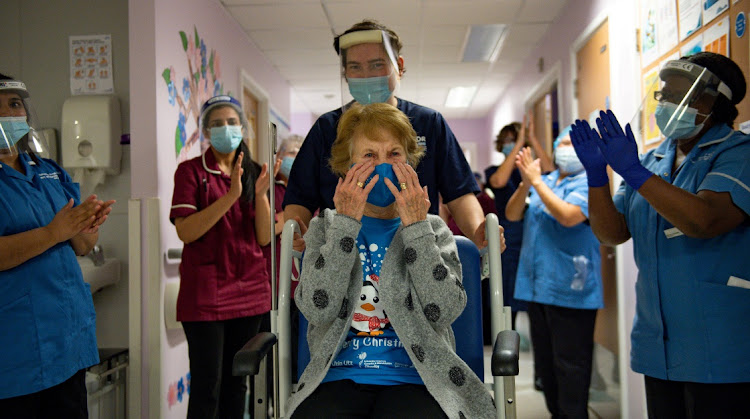 Margaret Keenan,the first person in the world to receive Pfizer’s Covid vaccine other than those administered in clinical trials. Picture: REUTERS

One year ago, a grandmother named Margaret Keenan, then 90 years old, rolled up her sleeve at University Hospital Coventry in the English midlands to take her place in history.

Keenan became the first person in the world to receive Pfizer’s Covid vaccine outside a clinical trial. It was a turning point in the pandemic, raising hopes that there was a path out of the crisis, along with questions about how well the rapidly developed shots would perform.

Now, after 8-billion doses, the impact is clear. The vaccines — not just from Pfizer but also Moderna, AstraZeneca, Johnson & Johnson and others — have slashed hospital admissions and deaths in countries where they’ve been rolled out widely. In Europe alone, research shows they’ve saved about 500,000 lives among people aged 60 and above.

But they haven’t vanquished the virus. Cases have quadrupled in the past year, vast parts of the globe haven’t gained access to vaccines and concerning variants keep emerging, bringing new waves of infections, the return of lockdowns and restrictions on travel.

And now, two years into the pandemic, there is Omicron, a heavily mutated variant that emerged in recent weeks. It’s put the world on edge, leaving everyone desperately waiting for information on the severity of the strain and how well vaccines will work against it.

“Vaccines are a major miracle of modern science,” said Sarah Pitt, a virologist at the University of Brighton in England. But some governments “decided they were going to vaccinate their way out of the pandemic. What we’ll do is vaccinate everybody, and it will all be fine. Of course, that was never going to work.”

The first Pfizer shot in the US came a week after Keenan, on December 14 2020. China had started doling out its vaccines in the summer of 2020 under an emergency-use authorisation.

Since Keenan’s moment, many developed nations, including the UK, have immunised the majority of their populations.

But the rollout over the past year hasn’t been smooth, partly due to delivery snags and very rare, but potentially serious, side effects that have fuelled hesitancy in some quarters. Scientists are also concerned that vaccine disparities will breed more dangerous strains that pose a risk to all nations.

The Covid-19 shots, developed in record time, are remarkable achievements. Yet they aren’t 100% effective, and some people who are protected can still become infected and transmit the illness to others.

Those cases appear to be more frequent with the Delta variant surging and immunity waning in people who were vaccinated months ago. In Europe, the latest surge in infections has put Austria back in lockdown, while Germany may be about to make vaccines compulsory.

Scientists are now racing to update the current shots to combat Omicron if necessary, and some are aiming to target multiple variants in one shot. Omicron’s mutations suggest that it is likely to evade the protection of vaccines to at least some extent, but there is also some very tentative evidence that it won’t cause more severe illness than previous versions of the virus. Answers to some of those key questions are expected in the coming days.

With studies showing that vaccine efficacy gradually wanes, governments are accelerating booster campaigns. Pills from Merck and Pfizer are on the way, adding to the arsenal against the virus.

Given that vaccines aren’t a silver bullet, some health experts say that, rather than counting so heavily on shots, governments should have maintained other measures, from masks to testing, for longer.

“We’re so fortunate to have vaccines,” said David Heymann, a professor at the London School of Hygiene and Tropical Medicine and former World Health Organisation (WHO) official. “In the UK and many countries with high vaccination levels, public health leaders believe, and I think they’re probably right, that they’ve been able to de-link serious illness from infection because of vaccines. But they haven’t been able to prevent infection with this generation of vaccines.”

Inequality has also been an issue in the drive to inoculate populations. Instead of vaccines being distributed evenly, rich countries raced ahead, creating a glaring gap in access. Health advocates have pushed to expand shipments, technology and production capacity.

Bruce Aylward, senior adviser to the WHO’s director-general, says more affluent countries should focus on helping lower-income nations that are struggling with a “toxic mix” of low vaccination levels, weak testing, fragile health systems and other factors. Otherwise, the virus will continue to have places to take hold and adapt.

“You are playing with fire” if you don't keep pressure on the virus in all parts of the world, Aylward said. “This virus will mutate, and if any of those mutations are favourable to transmission, they will emerge and they will dominate, and then you run into potential problems.”

But richer countries may be even more inclined to hoard shots now, given the recent surge in cases in Europe and elsewhere, and the Omicron threat.

In the US, the variant is prompting concerns about capacity in health systems that are already strained. Almost four out of five intensive-care beds across the country are occupied, with Covid patients accounting for much of that.

China, whose vaccines are less effective than the messenger RNA shots used in the West, marked the astonishing milestone of having 1- billion people fully vaccinated in September. Yet despite high coverage, its borders remain tightly sealed and Beijing continues to meet flare-ups with the same pre-vaccine playbook of strict lockdowns and mass testing to stamp out every infection.

Britain, the first country in the West to approve and deploy Covid vaccines, is recording more than 50,000 cases a day, moving closer to a 2021 high.

“The good news is that these vaccines have overperformed relative to what we expected,” said Michael Kinch, a vaccine specialist at Washington University in St Louis. But “we need to try to try to stay one step ahead of this thing, and there we’ve taken our eye off the prize”.

The worry now is that Omicron makes that even harder, and that the effectiveness of vaccines gradually declines over time in the face of new variants.

“Whether we like it or not, this is here to stay,” he said.