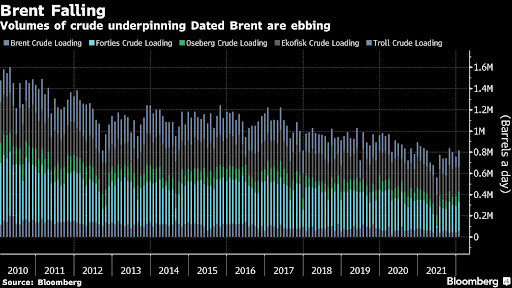 BP said the world’s most important oil benchmark was experiencing “regular dislocations” in the harshest criticism ever by an oil major about how the price of Brent crude is calculated.

“We are seeing increasingly regular ‘dislocations’ in the value of both benchmarks,” BP said in response to an industry consultation about the future of the benchmark. The dislocations, BP added, are “as a result of insufficient liquidity in underlying grades, and expiry changes which have resulted in increased futures volumes being taken to expiry by market participants”.

The consultation is being held jointly by S&P Global Platts, which publishes Dated Brent, and by Intercontinental Exchange (ICE), which hosts by far the world’s largest Brent futures contract in its ICE Futures Europe exchange. They are facing a challenge of sliding supply of benchmark barrels and fixes that are, in some way or another, far from perfect.

BP’s submission said that without an infusion of supply of similar-quality crude, ICE Brent and Dated Brent could suffer “even more frequent dislocations”. The company declined to comment further.

Platts said it has received extensive submissions from the market on Dated Brent and wouldn’t comment further until it concludes a review of them. ICE declined to comment.

BP’s rebuke was part of wider comments from the company supporting bringing in West Texas Intermediate (WTI) crude from Midland, Texas, to help set the Dated Brent price. Vitol and Trafigura, two of the top independent traders, have also previously voiced support for such an approach.

ICE and Platts are seeking industry feedback after Platts had tried to push through a plan earlier this year to add WTI to Dated Brent, but also fundamentally overhaul its terms of trading.

That idea was met with uproar and led to Platts apologising to traders for a hasty approach, and resume talks with the market — this time in conjunction with ICE — on the best way forward.

The main competing idea is to bring in supplies of from the giant Norwegian field, called Johan Sverdrup. That solution has drawn criticism too because the grade is denser and more sulphurous than those of Brent, Forties, Oseberg, Ekofisk and Troll — the varieties underpinning Dated Brent. Platts has introduced pricing mechanisms over the years to help smooth out quality differences between the grades. Johan Sverdrup isn’t a “suitable addition”, BP said.

Adding WTI isn’t without its problems either, though. Besides a distance of about 8,000km between the US Gulf Coast and main North Sea loading terminals, there are also issues about the quality of US oil, which is often a blend of a variety of streams.

BP also suggested that Forties and Brent will need to be removed from the benchmark in the medium term as their values become “increasingly difficult to assess due to their reducing volumes”.

The North Sea market has sometimes been the subject of price dislocations. In the past, aggressive buying sprees have left market prices surging while giant tankers holding the oil that underpinned those values sat anchored along the Scottish coast, suggesting lacklustre demand for the cargoes.

BP isn’t the first to criticise energy price benchmarks. In 2012, Total told international regulators that market prices of several key indices were out of line with the company’s experiences several times a year.

1.
Would you believe, they’ll put a mine on the moon
News
2.
Biggest solar project deals get approval from ...
News
3.
Russia eases key capital control as rouble surge ...
News
4.
Working together in an office does not help ...
News
5.
HSBC CEO Noel Quinn rebukes executive for ...
News

1.
Would you believe, they’ll put a mine on the moon
News
2.
Biggest solar project deals get approval from ...
News
3.
Russia eases key capital control as rouble surge ...
News
4.
Working together in an office does not help ...
News
5.
HSBC CEO Noel Quinn rebukes executive for ...
News