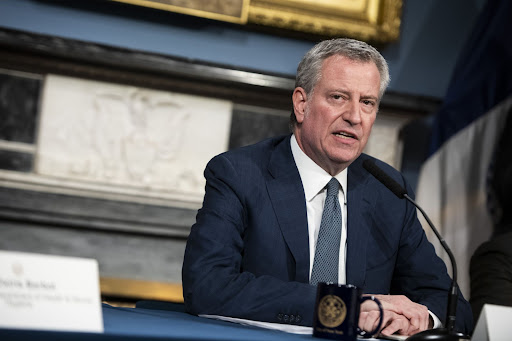 Some of New York City’s biggest banks and other companies were “blindsided” by mayor Bill de Blasio’s decision on Monday to impose a vaccine mandate on private sector employees, a business group said.

De Blasio ordered all private sector employers to require their workers to be vaccinated by December 27, with no test option. The mandate will cover roughly 184,000 businesses. The highly transmissible Omicron variant has spread to at least one-third of US states.

Although many large companies like Goldman Sachs and Morgan Stanley already require vaccination to work from their buildings, Kathryn Wylde, who runs the Partnership for New York City,  said the city’s decision to impose a mandate wasn’t made in co-ordination with companies and executives and that it will sow uncertainty among the business community.

Partnership for New York City is an influential business group that counts JPMorgan Chase and Goldman Sachs as members.

“Inconsistent policies at the federal, state and city levels are not helpful and it is unclear who will enforce a mayoral mandate, and whether it is even legal,” Wylde said in a statement on Monday. “President Biden’s vaccine mandate on employers with over 100 employees is currently held up by litigation and it is hard to imagine that the mayor can do what the president is being challenged to accomplish.”

The Greater New York Chamber of Commerce said it supported the expanded mandate.

At a briefing on Monday, De Blasio refuted the claim he didn’t reach out to businesses and said there was “a lot of dialogue with the business community in advance”.

Reuters reports that in addition to the private sector mandates, children 5 to 11 years old must get at least one vaccine dose by December 14 to enter restaurants and to participate in extracurricular school activities, such as sports, band, orchestra and dance.

“Vaccination is the way out of this pandemic, and these are bold, first-in-the-nation measures to encourage New Yorkers to keep themselves and their communities safe,” de Blasio, who leaves office in January,  said.

De Blasio's successor, Eric Adams, “will evaluate this mandate and other Covid strategies when he is in office and make determinations based on science, efficacy and the advice of health professionals,” said his spokesperson Evan Thies.

Over the pat  week, the country has averaged more than 120,000 new infections a day, up 64% from the prior week, according to a Reuters tally. Deaths, which lag infections, have averaged 1,300 a day over the last seven days, up from an average of 800 a day a week ago, according to Reuters data.

The Delta variant still accounts for 99.9% of new Covid-19 cases in the US, health officials said.

Alphabet’s Google and Meta’s Facebook, which also have operations in New York City, also already require all US employees to be vaccinated to enter buildings.

The US Centers for Disease Control and Prevention (CDC) on Monday advised Americans against travel to France, Jordan, Portugal, and Tanzania over the new variant, but they are not on a travel ban list. The CDC now lists 83 destinations at “Level 4: Very High” classification and also on Monday added Andorra, Cyprus and Liechtenstein to the highest travel advisory level.

Update: December 6 2021
This story has been updated with new information.

Proof of vaccination, recovery or a negative test will be required for buses, metro, local trains and hotels
News
8 months ago

Busa looks to court for clarity on mandatory vaccines

Busa looks to court for clarity on mandatory vaccines