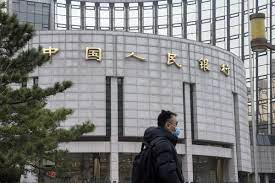 China has cut the amount of cash most banks must hold in reserve, acting to counter the country’s economic slowdown in a move that puts the central bank on a different policy path than many of its peers.

The People’s Bank of China will reduce the reserve requirement ratio (RRR) by 0.5 percentage point for most banks on December 15, releasing 1.2-trillion yuan ($188bn) of liquidity, according to a statement published on Monday. The cut was signalled by Premier Li Keqiang last week, when he said that authorities would act at an appropriate time to help smaller companies, and marks the second reduction in 2021.

The decision comes after an improvement in recent industrial and broader economic data, though Beijing’s tighter curbs on the property market have led to a slump in construction and worsened a liquidity crisis at real-estate firms including embattled China Evergrande Group. The central bank decision was closely followed by a statement from top leaders pledging to stabilise the economy in 2022, with a Politburo meeting signalling an easing of some property curbs.

The message from the Politburo meeting is more important than the cut, “as it indicates the government may loosen policies in the property sector”, according to Zhiwei Zhang, chief economist at Pinpoint Asset Management. 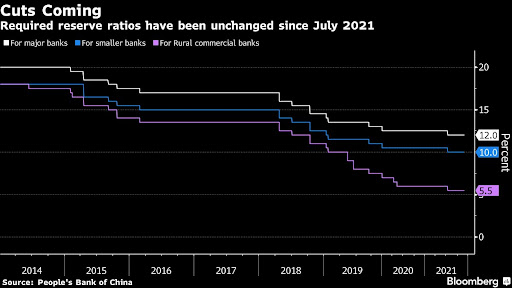 The Politburo meeting pledged to focus on stabilising macroeconomic conditions, ensuring that the economy grows in a reasonable range and that society remains orderly ahead of a key Communist Party congress late in 2020. There will be proactive fiscal policy in 2022 and prudent monetary policy will be flexible, appropriate, and also maintain reasonably ample liquidity, according to the statement from the official Xinhua News Agency after the meeting chaired by President Xi Jinping.

The meeting of the Politburo on Monday will be followed by the Central Economic Work Conference later in December, which will flesh out economic policy plans for 2022.

The RRR cut is a “regular monetary policy action”, the Bank said, downplaying any expectations that the decision was the start of an easing cycle.

“Prudent monetary policy direction has not changed,” it said, adding that the bank “will continue with a normal monetary policy, maintaining the stability, consistency and sustainability of policy, and won’t flood the economy with stimulus”.

With the US Federal Reserve and other global central banks looking to tighten policy, the easing move by the Bank makes the divergence between China and much of the rest of the world even clearer.

The RRR cut will be applied to all banks except those that are already on the lowest level of 5%, which are mostly small rural banks, according to the statement. The weighted average ratio for financial institutions will be 8.4% after the cut, down from 8.9% previously, the PBOC said in a separate statement.

The People’s Bank of China reduces the amount of cash most banks must hold in reserve, acting to counter an economic slowdown.

Some of the money released by the RRR cut will be used by banks to repay maturing loans from the PBOC’s medium-term lending facility, and some of it will be used to replenish financial institutions’ long-term capital, the central bank said. There are almost 1-trillion yuan worth of the one-year loans maturing on December 15, the day the cut takes effect.

Even with the deepening housing market slump, authorities had been restrained in adding new support policies, holding monetary policy steady and maintaining a measured pace of fiscal spending. However, the central bank signalled an easing bias in the latest monetary policy report in November, while the State Council urged local governments to speed up spending.

“The aim of the RRR cut is to strengthen cross-cyclical adjustment, enhance the capital structure of financial institutions, raise financial services capabilities to better support the real economy,” the Bank said. The cut will effectively increase long-term capital for banks to serve the real economy, and the central bank will guide banks to step up their support for small businesses, it said.

A cut in the reserve ratio doesn’t directly lower borrowing costs, but quickly frees up cheap funds for banks to lend. The reduction will lower the capital cost for financial institutions by about 15- billion yuan each year, which will lower the overall financing cost of the economy, it said.

Deal on greater transparency, legal certainty and reasonable fees by 67 states, including the US, China and EU, could save $150bn in annual trade ...
World
6 months ago