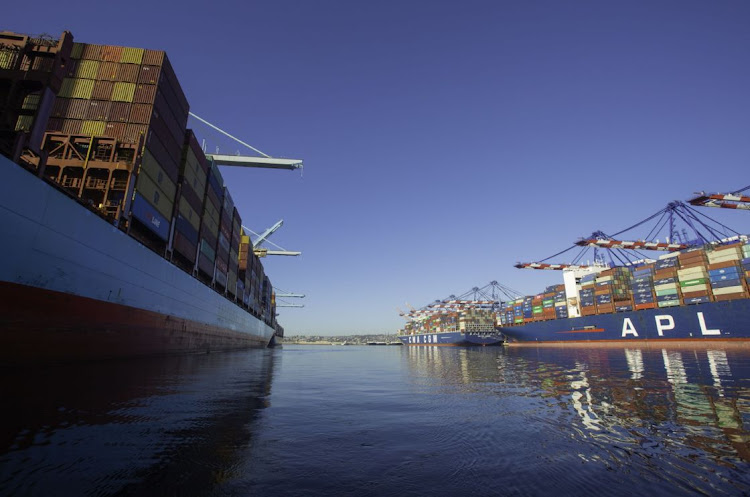 Container ships berthed at the Port of Los Angeles in California, the US, November 21 2021. Picture: TIM RUE/BLOOMBERG

The number of container ships headed for the busiest US port complex has risen to close to 100 under a new counting method, underscoring the magnitude of the economy-restraining logjam that the Biden administration is trying to help alleviate.

The backup outside the adjacent ports of Los Angeles (LA) and Long Beach, California, involves 96 container carriers, up from 86 on November 16, when a new queuing system took effect and dozens of arriving ships stayed outside the official area to be counted, according to the Marine Exchange of Southern California. The revised measure released late on Friday includes those eastbound vessels further out in the Pacific.

Just when it looked as if the bottleneck was easing — the previous official tally was 41 ships in the queue on Thursday — the latest numbers confirm that the most visible symbol of the US’s overwhelmed supply chains is still likely months away from being cleared. The average wait for ships was 20.8 days on Friday, almost a week longer than a month ago, according to LA’s Wabtec Port Optimizer. 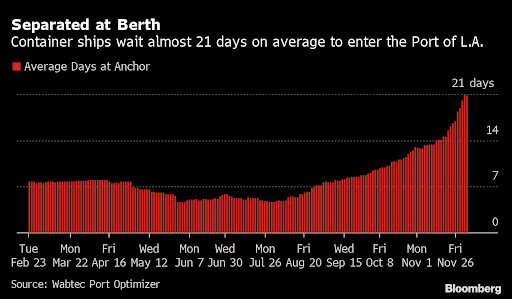 The revised way of counting ships bound for LA-Long Beach divides them into categories: 40 vessels that are either anchored in designated spots plus those “loitering” within 65km of the ports, and another 56 outside that perimeter, many of which have slowed their speed on the voyage from Asia that typically takes at least two weeks. So the line has got longer both in number of ships and distance.

The White House has focused its attention on working with the logistics industry to move the empty and full containers that have piled up near the port terminals, by encouraging longer hours for truckers and longshoremen and by backing incentives for timely pickup of goods lingering for days or weeks.

That effort to reduce so-called dwell times for containers in Southern California has had mixed results, with the number of boxes waiting zero to eight days dropping to 33,520 from December 2, from 39,671 a week earlier, according to the LA port’s figures. Still, the number waiting nine days or longer rose to 21,278, from 18,170 a week earlier.

ECONOMIC WEEK AHEAD: GDP data expected to show the effects of July’s unrest

Economy’s performance will take centre stage in a week that also features retail sales, as well as mining and manufacturing production data
Economy
1 month ago

From printer ink to light bulbs, US offices are seeing supply shortages

Disruptions to the global supply chain caused by factory shutdowns in Asia, congestion at US ports and a nationwide labour shortage are causing ...
World
1 month ago

US president calls for round-the-clock operations at ports to clear backlog of roughly 500,000 containers
World
3 months ago
Next Article