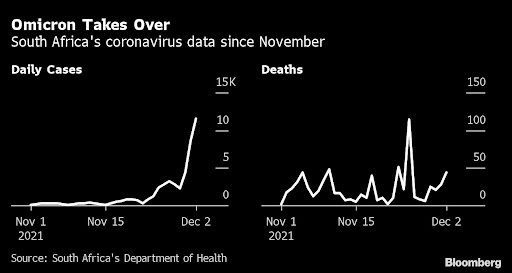 The omicron variant is now in at least 10 U.S. states, and White House chief medical adviser Anthony Fauci said there is “absolutely” community spread. Gilead Sciences Inc. recalled two lots of its Covid-19 drug remdesivir in the U.S. after a complaint about glass particles in the vials. Picture: BLOOMBERG

The omicron variant is now in at least 10 US states, and White House chief medical adviser Anthony Fauci said there is “absolutely” community spread. Gilead Sciences Inc. recalled two lots of its Covid-19 drug remdesivir in the US after a complaint about glass particles in the vials.

The states of New Jersey, Pennsylvania, Missouri, Maryland and Nebraska reported omicron infections on Friday, and cases are guaranteed to keep on rising in the coming days, according to Fauci. Covid-19 infections in the US have reached the highest level in two months.

China reported 75 new infections of Covid-19 Friday, as an outbreak in a border town expanded. Inner Mongolia, where the flare-up is concentrated, added 61 cases, and a further three people without symptoms also tested positive, the National Health Commission said, without specifying if any infections were due to omicron. Singapore said vaccinated travellers have to test daily for a week.

Omicron detected in at least ten US states

Omicron spread to at least 10 US states after New Jersey, Pennsylvania, Missouri, Maryland and Nebraska reported infections on Friday.

New Jersey identified an infection in a traveller to the state, an adult female from Georgia who is fully vaccinated and had recently travelled to SA, according to Governor Phil Murphy. Pennsylvania reported one case, a man in his 30s from Philadelphia, city health officials announced. Missouri reported one infection, a St Louis resident who recently travelled domestically.

The first case in Nebraska came from an individual who is suspected to have been exposed on a flight from Nigeria on Nov. 23, health officials said. Five more cases were likely exposed through household contact.

The new variant has also been found in New York, California, Colorado, Hawaii and Minnesota, which said that a resident who had travelled to an anime convention at Manhattan’s Javits Center tested positive.

England has identified 75 more infections caused by the omicron variant, tripling the total caseload to 104, the UK Health Security Agency reported. Cases have been reported across the country.

Ireland tightened restrictions, as it seeks to head off a possible renewed surge driven by the omicron variant. The government will close nightclubs from Dec. 7 to Jan. 9. Bars and restaurants will be restricted to table service while a maximum of four households can mix in private homes.

“The potential for a very serious crisis is obvious” if omicron takes hold, Irish prime minister Micheal Martin said in a national address.

South Korea reported three additional infections of the omicron strain on Saturday, bringing total cases of new variant to nine, according to health authorities. The country also set new daily records for virus cases, Covid-19 deaths and the number of critical Covid-19 patients on Saturday. The country is awaiting test results to see whether there is community transmission.

International travellers into Australia’s South Australia state will have to quarantine for 14 days on arrival, up from the current 7 days, due to concerns over the omicron variant, Premier Steven Marshall told reporters Saturday. Travelers arriving from Australia’s south-eastern states will need to test on arrival and isolate until a negative result is received, he said.

Gilead Sciences Inc. said it was recalling two lots of its Covid-19 drug remdesivir in the US after receiving a complaint about glass particles in the vials that was confirmed by a company investigation.

The recall involves 55,000 vials of the drug, or enough to treat 11,000 hospitalised patients, company spokesperson Chris Ridley said in an interview. He said the recall wouldn’t impact supply of the drug in the US or the rest of the world, as the company has plenty of supply on hand.

In a statement, Gilead said that it had received no reports of adverse events linked to the recall, which has affected the US market.

Oslo has uncovered 12 more cases of the omicron variant after a Christmas party in the Norwegian capital, bringing the total to 13, the city government said in a statement on Friday.

More cases are expected with more than 50 people testing positive to Covid-19 after a Scatec ASA event attended by 120 employees on Nov. 26.

Russia suffered the most fatalities of the Covid-19 pandemic in October, according to official data released Friday, adding to what a demographer says is on track to be the deadliest year since World War 2.

There were 74,839 deaths associated with the virus in October, a 47% increase over the previous monthly high in July, according to Federal Statistics Service data published late Friday. Russia has had over 575,000 deaths linked to Covid-19 since the start of the pandemic.

SA’s daily number of confirmed Covid-19 cases almost quadrupled since Tuesday as the omicron variant spreads across the country.

The country recorded 16,055 infections in the last 24 hours and a positivity rate accelerated to 24.3% from 16.5% on Tuesday, according to the National Institute for Communicable Diseases.

A South African study of infections since the start of the pandemic found that the risk of reinfection from the omicron coronavirus variant is three times higher than for any previous strain. More people under 40 are contracting Covid-19 as a fourth wave sweeps across SA, early data from the nation’s National Institute for Communicable Diseases show.

Singapore will require additional testing for travellers and extend travel curbs to more African countries, as it rolls out more measures to allow it time to figure out how to deal with the omicron variant.

The city-state’s infections continue improving with the number of cases found in the community reaching the lowest since Sept. 13, according to the city-state’s Ministry of Health.

US infections highest since October

Covid-19 infections in the US are at the highest level in two months.

Infections had been rising even before the discovery and arrival of the omicron strain. They dipped last week likely due to lower testing and reporting delays during the Thanksgiving holiday. The seven-day average of cases in the US was 100,835 as of Thursday, the most since Oct. 6, according to data compiled by Johns Hopkins University and Bloomberg.

The Swiss government expanded the use of certificates and masks to stem the tide of coronavirus infections less than a week after citizens backed previous measures in a referendum.

All indoor public events will require a Covid-19 certificate, which shows that the holder has been vaccinated, recovered from or tested negative, the government said Friday. Public institutions and event organisers can exclude the unvaccinated. A proposal to make working from home mandatory for all, or at least the unvaccinated, failed to win support. Instead, the government is urging people to work from home and those in offices need to wear masks.

The Swiss have generally taken a more laissez-faire approach than their neighbours to managing the pandemic, including keeping schools mostly open and allowing ski resorts to continue operating.

No fans for Bayern Munich-Barcelona game

Bayern Munich and Barcelona will play their Uefa Champions League soccer tie on Dec. 8 without spectators, after the German state of Bavaria introduced new restrictions on gatherings, ESPN reported.

Bavaria has ordered all matches to be played behind closed doors for the foreseeable future.

UBS Group AG is asking its advisory and deals bankers in Europe, the Middle East and Africa to avoid travelling for business purposes.

The precautionary measure applies to employees in the global banking unit amid the uncertainty surrounding the omicron variant, according to a person familiar with the guidance. Financial News reported the new earlier on Friday. A spokesperson for UBS declined to comment.

Germany has a long battle ahead against the pandemic, a top health official warned, with pressure set to increase on intensive-care units even as infections show signs of peaking.

An apparent plateau in the number of new cases could partly be a result of overwhelmed local health authorities falling behind on testing, Lothar Wieler, the president of the RKI public-health institute, said Friday in Berlin. He urged citizens to reduce social contacts and called for caution in interpreting the latest Covid-19 data.

The panicked reaction across much of the world to the Omicron variant comes with a scramble for information. In SA, the country where Omicron was ...
News
1 month ago

With the emergence of the Omicron variant, a global fourth wave of Covid seems likely
News & Fox
1 month ago
Next Article