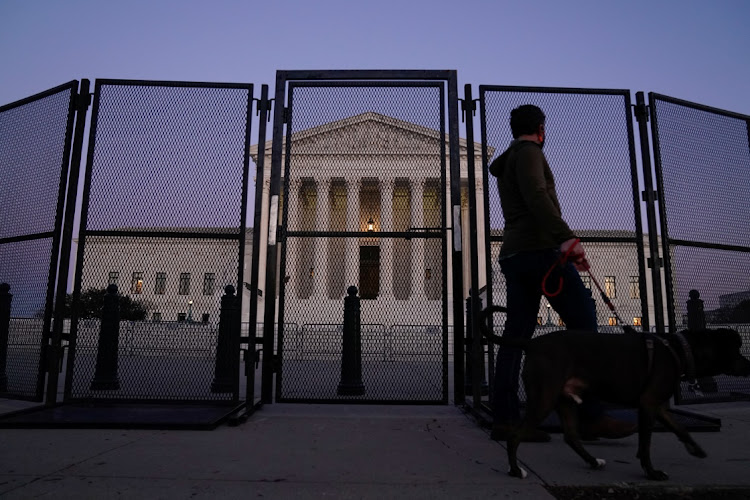 The US supreme court is shown behind security fencing in Washington, the US, in this January 12 2021. Picture: REUTERS/ERIN SCOTT

Supreme court judges asked whether a ruling in favour of Mississippi’s 15-week abortion ban could call into question other seemingly settled constitutional rights, from the use of contraception, to the criminalisation of sodomy, to the more recently recognised right to same-sex marriage.

A majority of the judges signalled at argument on Wednesday that they will curtail or even overturn the court’s landmark rulings governing the right to an abortion, Roe vs Wade and Planned Parenthood vs Casey, even though they’ve been the law of the land for decades.

The supreme court has recognised other implicit rights including several under the “right to privacy”, which itself isn’t explicitly in the text of the constitution.

If the court does an about-face on abortion, judge Sonia Sotomayor warned the high court could face similar challenges to other rights grounded in the same principles.

In the 1965 ruling in Griswold vs Connecticut, the court said the constitution creates “zones of privacy” even though such a right isn’t explicit in the text. Those zones exist within the “penumbras” of the specific rights in the Bill of Rights, the court said.

Sotomayor noted on Wednesday some of the rights the court has “discerned” from the constitution.

Judge Amy Coney Barrett asked Mississippi solicitor-general Scott Stewart, who defended the state’s abortion law, whether a decision in his favour would affect the cases cited by Sotomayor.

Stewart said cases involving contraception, same-sex marriage and sodomy wouldn’t be called into question because they involve “clear rules that have engendered strong reliance interests and that have not produced negative consequences or all the many other negative stare decisis considerations we pointed out.”

That reasoning didn’t satisfy Sotomayor, who said, “I just think you’re dissimulating when you say that any ruling here wouldn’t have an effect on those.”

In an interview, David Cortman, of the conservative group Alliance Defending Freedom, said two things in particular distinguish abortion from those other privacy rights: the right to life and the states’ interest in protecting a child.

Cortman, whose group urged the judges to allow states to ban same-sex marriages, said those other rights may be just as wrong as the right to an abortion. But the fundamental interest in life that’s at issue in abortion means those other rights are probably not in any real danger of being overturned.

He noted that judge Brett Kavanaugh even mentioned some of those rights when speaking about cases where the court has overturned unpopular rulings, suggesting there is little appetite on the court to reconsider them.

“If you think about some of the most important cases, the most consequential cases in this court’s history, there’s a string of them where the cases overruled precedent,” Kavanaugh said, citing Lawrence vs Texas, the case saying states can’t ban same-sex conduct, and Obergefell vs Hodges, regarding same-sex marriage.

Groups opposed to overruling Roe warned in briefs in advance of the argument that doing so could open the door to undermining other precedents.

Regardless of what the court has done in the past, backtracking on abortion now would represent a “sea change” in how the court approaches precedent, a group of LGBTI groups told the judges.

They note that “even when the court has reconsidered its constitutional rulings, it rarely — if ever — overrules precedent to take away previously recognised individual rights”, like they’d be doing here.

So overruling “Roe and Casey would represent a stark departure” for the court, the groups said, opening up other individual rights to attack.

As SA edges closer to rules preventing antivaxxers from entering restaurants or public spaces, the attempts to tar this as ‘Nazism’ are on the rise. ...
Opinion
6 months ago

The meeting takes place amid fierce debate in the US Church, where Biden is under pressure over his conflicted position on abortion rights
World
7 months ago
Next Article