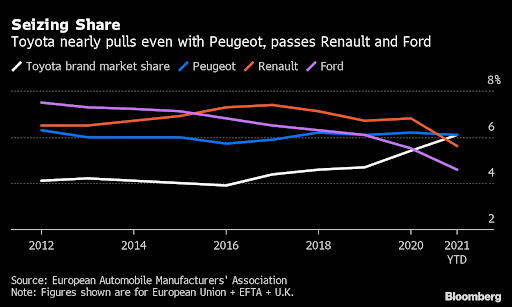 Toyota has vowed to be ready to sell only zero-emission cars in Europe by 2035. Picture: BLOOMBERG

Toyota has vowed to be ready to sell only zero-emission cars in Europe by 2035, a surprise pledge that aligns the world’s biggest automaker with the world’s most ambitious climate plan.

The Japanese manufacturer also set a new intermediate goal for at least half its sales in Western Europe to be zero-emission vehicles by the end of the decade. That’s a big step up from the roughly 10% sales mix expected in 2025.

While the objectives align Toyota with green deal measures the EU proposed in July, the company qualified its 2035 view by saying it assumes the bloc will have sufficient infrastructure in place for battery recharging and hydrogen refuelling. EU member states are already wrangling over an end date for combustion engines, with France advocating for plug-in hybrids to be allowed for longer and Italy seeking to shield supercars from the phase-out.

Toyota’s commitments are somewhat unexpected, since executives have long sought to preserve a role for hybrids like the Prius to reduce tailpipe emissions until fully electric vehicles are attainable for more consumers. The company’s recent performance in Europe has vindicated this strategy: car buyers have turned against diesels in droves since Volkswagen’s (VW’s) engine-rigging scandal came to light in 2015. Toyota’s sales have surged, and its fleet’s average CO2 emissions are the lowest among major conventional carmakers.

But for all Toyota’s success with hybrids, it’s become increasingly difficult for the company to contend that consumers in parts of Europe aren’t yet ready to make the jump to cars powered entirely by battery. More than 800,000 such electric vehicles were registered in the region in 2021 through September, up more than 90% from a year ago. Elon Musk’s all-electric-or-bust argument also has won over investors, with Tesla overtaking Toyota as the world’s most valuable automaker in 2020 and not looking back.

“We are not in any way defensive about or reluctant followers,” Matthew Harrison, Toyota Europe’s CEO, said in an interview. “We’ll concentrate on our being in good faith, but we need the same sort of conviction and effort and progress also from an infrastructure and renewable-energy capacity perspective.”

Other automakers have already outlined goals similar to Toyota’s. VW’s namesake brand has said it plans to stop selling combustion cars in Europe between 2033 and 2035. Ford’s passenger-vehicle range will be all-electric by 2030. Daimler’s Mercedes-Benz has pledged to be ready to go all-electric by the end of the decade where conditions allow.

The announcements by companies that haven’t reduced as much CO2 from their fleets, coupled with authorities fixating only on how soon the industry can go fully electric, has frustrated Toyota’s leadership team.

“Right now, there’s this sort of press war going on with who will promise the most,” said Gill Pratt, Toyota’s chief scientist. “The promises aren’t removing any CO2 from the air.”

Pratt makes the case that the way to reduce the most net carbon emissions globally will be to keep offering hybrids and plug-in hybrids until batteries are cheaper and cleaner to produce, and charging infrastructure using renewable energy is more widely available.

But these qualms are no longer standing in the way of Toyota mounting an electric vehicle push. The company is rolling out an all-new sport utility vehicle in 2022 called bZ4X that resembles its popular RAV4 SUV. This will be the first of seven in a series Toyota is calling bZ, standing for “beyond zero”.

The Lexus brand will also get in on the act, with a new battery-electric SUV dubbed RZ coming in the first half of 2022. The luxury division will aim to almost double annual sales to 130,000 vehicles by 2025, from roughly 70,000 now.

While Toyota is a believer in batteries — it’s sold almost 20-million electrified vehicles to date — the company has also been a steadfast proponent of fuel cells and continues to see hydrogen playing a role in reducing transport emissions, particularly from larger vehicles.

Toyota is going to start producing second-generation fuel cell modules in January in Belgium that could be used in trucks, buses, trains or ships.

“We have to get carbon down,” Pratt said in an interview. “We need to be humble. We need to understand that we don’t really know what’s going to work out best, and so the best approach right now is to try many things.”