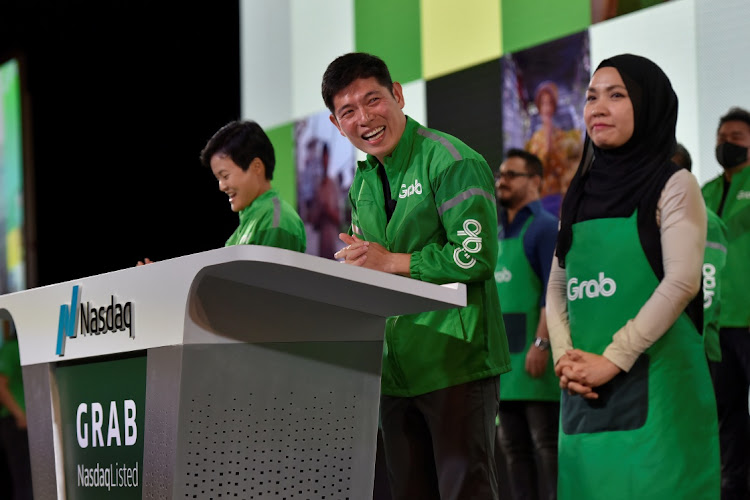 Grab's CEO Anthony Tan looks towards the audience at the Grab bell-ringing ceremony at a hotel in Singapore, December 2 2021. Picture: CAROLINE CHIA/REUTERS

Grab Holdings, Southeast Asia’s biggest ride-hailing and delivery company, fell sharply in its first day of trading on Thursday after completing its merger with Altimeter Growth Corporation, the largest deal yet for a special purpose acquisition company (Spac)

Grab has yet to prove it can reach profitability, especially with the resurgence of Covid-19. In September, the company cut its revenue projections for 2021 as Southeast Asia battled with the Delta variant. In November, the company said its net loss widened to $988m for the third quarter, while revenue declined 9% to $157m.

“We are confident about our business,” Anthony Tan, the co-founder and CEO, said in an interview Thursday. “The business is tracking well,” in terms of meeting this year’s target of gross merchandise value of $15bn to $15.5bn.

Tan and Altimeter Capital Management CEO Brad Gerstner unveiled their merger in April and then had to navigate a challenging year for Spacs and global markets. They delayed the closing while Grab revised its financial statements, but investors ultimately voted overwhelmingly in favour of the deal this week, setting the stage for the merged entity’s market debut.

Grab, founded by Tan and Hooi Ling Tan, has long been viewed as one of the most promising start-ups in Southeast Asia and a leading candidate for public markets. Its business model is similar to that of Uber Technologies, the US ride-hailing and delivery pioneer that sold its Southeast Asia operations to Grab in 2018. Also like Uber, Grab is backed by Masayoshi Son’s SoftBank Group.

Amid growing global concern about the latest Covid-19 variant, Hooi Ling Tan said it’s still “too early to tell” if those fears are translating into shifting consumer behaviour.

“A critical part of Grab’s growth trajectory over the last two years has been our super app strategy that has enabled us to be very resilient to Covid-19 challenges,” she said in an interview on Bloomberg Television on Thursday. “Think about Grab as Uber, DoorDash and Venmo all in one.”

One advantage is the growth ahead for Southeast Asia. The region’s internet economy is poised to double to about $363bn  by 2025, according to research from Google, Temasek Holdings and Bain & Co released in November.

Sea, another Singapore-based technology company, has demonstrated the potential for investors. It went public in 2017 as primarily a gaming company and then expanded into e-commerce and digital payments. Its shares have surged more than 1,600% since its debut, rising to become the most valuable company in Southeast Asia with a market capitalisation of about $145b.

Grab is facing growing competition in the region, including from Sea. More directly, its Indonesian ride-hailing rival, Gojek, merged with e-commerce provider PT Tokopedia to become GoTo. The combined entity is preparing for an initial public offering at home and in the US in 2022.

Still, Grab has a leading position in the market and it raised more than $4bn in additional capital as part of the Spac deal.

“Grab’s dominance in Southeast Asia’s ride-hailing market gives it an edge on rivals such as GoTo and Sea, enabling it to maintain leadership in the region’s online food and grocery delivery sectors, and grow sales by leaps and bounds in the next few years,” Bloomberg Intelligence analyst Nathan Naidu wrote in a research note.

Altimeter Growth shares, originally sold at $10 each, have had a tumultuous year ahead of the deal’s completion. They rose as high as $17.06 before closing at $11.01 on Wednesday.

But Vijay Shekhar Sharma has defended the company’s prospects, encouraging employees — for four hours — to look past the first-day drop
Companies
7 months ago