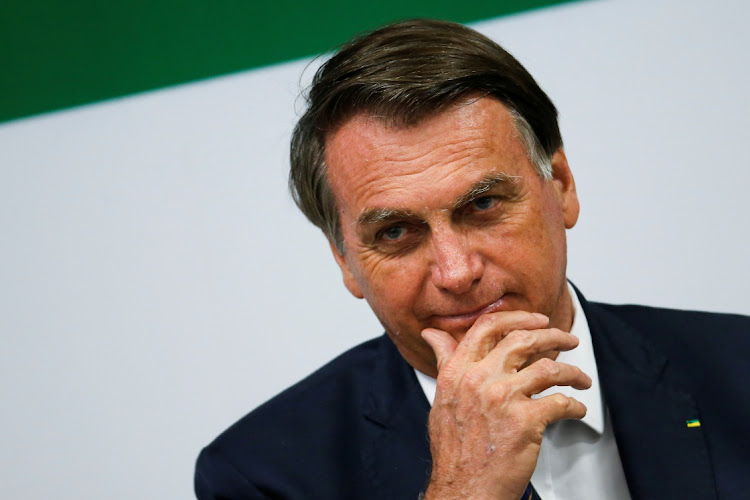 Brazil’s economy fell into recession as extreme weather conditions, high interest rates and inflation cut short its recovery from the pandemic, dealing a blow to President Jair Bolsonaro just as he prepares for his re-election campaign.

GDP fell 0.1% in the July-September period after posting a revised decline of 0.4% in the second quarter. From a year ago, the economy expanded 4%, the national statistics agency said on Thursday.

The downturn shows mounting challenges for Latin America’s largest economy. Unemployment stands above 12%, annual inflation is running at a five-year high, and the central bank has unleashed the world’s most aggressive monetary-tightening campaign in 2021. While most countries are enjoying strong growth in the aftermath of the coronavirus, Brazil is losing momentum despite the lifting of pandemic-related restrictions and an expanded vaccination drive.

The data caused traders to unwind bets that the central bank could become even more aggressive to rein in inflation. Swap rates on the contract due in January 2023, which indicate expectations for the benchmark Selic at end-2022, fell 22 basis points to 11.6% by midmorning.

“There’s a feeling of paralysis,” said Sergio Vale, chief economist at MB Associados consultancy, adding that policymakers are likely to be more cautious when raising interest rates in coming months. “The economy reached a high level in the second quarter and stopped there, and some sectors, such as agriculture, suffered a great deal.”

Brazil’s huge agriculture sector was down 8% on the quarter amid drought and frost, while industry was flat. On the other hand, services and family consumption grew 1.1% and 0.9%, respectively, the statistics agency said. 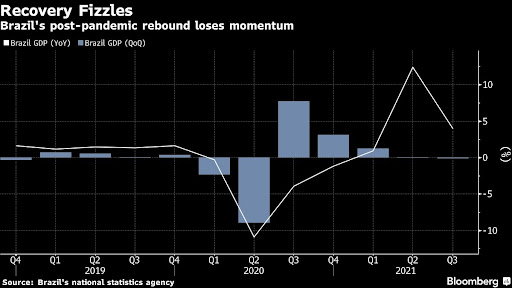 Many of Brazil’s woes are out of its control: disruptions in the world supply chain, climate change that has hurt farmland and higher commodity prices are helping to fuel inflation that will translate into even higher borrowing costs.

Traders are betting on an interest rate hike of at least 150 basis points at next week’s policy meeting, which would take the Selic to 9.25%. The GDP data may lead the central bank to temper the hawkish stance it has held in recent months, according to William Jackson, an economist at Capital Economics.

“With financial conditions tightening, the terms of trade worsening, and the threat from the new Omicron variant, the risks to our GDP growth forecast for next year of 1.3% are skewed firmly to the downside,” Jackson wrote in research note on Thursday.

Part of the economic pain is self-inflicted. Investors are increasingly worried about public finances as the government pushes for changes in a key austerity law to allow Bolsonaro to boost social spending ahead of the 2022 vote. Such concerns have caused the real to lose about 8% of its value against the dollar this year despite rising interest rates.

Analysts surveyed by the central bank have slashed their GDP forecasts over the past two months as questions about Brazil’s fiscal trajectory grow. They now expect economic growth to slow to less than 0.6% next year from 4.8% in 2021.